You are here: Home / Campgrounds and RV Parks / RV Sales of Oregon Hits Milestone
This post may contain affiliate links or mention our own products, please check out our disclosure policy here. 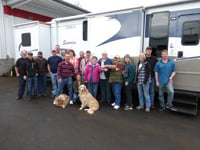 With the country deep in a recession and no business segment suffering more than the RV industry, 2009 did not seem like a good time to start an RV dealership. But that didn’t keep Rich Marston and Gary Hoffman from opening RV Sales of Oregon in Eugene that July.

Now five years later, they have reached a business milestone, selling their 600th RV. And ironically it was to the same customers who bought the first RV the dealership ever sold.

Repeat business—with customers coming back to buy another RV or sell the old one— has been one of the keys to the dealership’s success, Marston said. So, too, has been building one of the largest inventories of pre-owned motorhomes in the West, attracting buyers, not only locally, but also from out-of-state and even out of the country.

Marston has been in the RV industry nearly all his life, and Hoffman, who once played football for the Green Bay Packers and San Francisco Forty-Niners, has 20 years of RV sales and management experience.  Starting a business during the Great Recession may have been risky, but Marston said it made it easy to assemble a superior team of talented and experienced employees.

Marston and his wife, Debbie, and Hoffman, and his wife, Stephanie, have built RV Sales of Oregon on family values. The dealership is closed Sundays, except by appointment, and it invites customers to barbecues on Friday afternoons. Two golden retrievers, Hannah and Lewsi, add to the friendly atmosphere by playfully greeting customers.

The dealership occupies two and a half acres at 2100 Highway 99 in Eugene. Motorhomes account for about 70 percent of sales, but travel trailers, fifth wheels and truck campers are available, too.
The entire inventory is either owned by the dealership or on consignment.  Nothing is bought at auction, and as a result, said Marston, “We can tell you where every RV came from and its history.”

Video tours of each RV are posted online to help customers find the right vehicle. The videos are professionally produced and run about 15 to 20 minutes, with knowledgeable salesmen conducting the tours. Because of the videos, Hoffman said, customers often arrive at the dealership knowing which RV they would like and already feeling a connection with the sales staff. “The ice is broken,” Hoffman said. A customer will spot a salesman on the lot and say, “Hey, I know you. I spent hours last night watching your videos.”

Hoffman said the dealership started with five people and now has a dozen employees.  Growth has come by “doing it the right way,” he said. RVers at a campground may not tell each other what they paid for their coach, Hoffman said, but they will share how they were treated by a dealership, and getting that positive word-of-mouth has been crucial.

RV Sales of Oregon includes a complete service department, with three bays and a service team headed by Shane Prom, who has more than 20 years of RV experience. The department services everything from tent trailers to luxury motorhomes.