You are here: Home / Blog / RV Travel Tales: Tribute to Ray Johnson, the Bladesmith Poet in Silver Dollar City
This post may contain affiliate links or mention our own products, please check out our disclosure policy here. 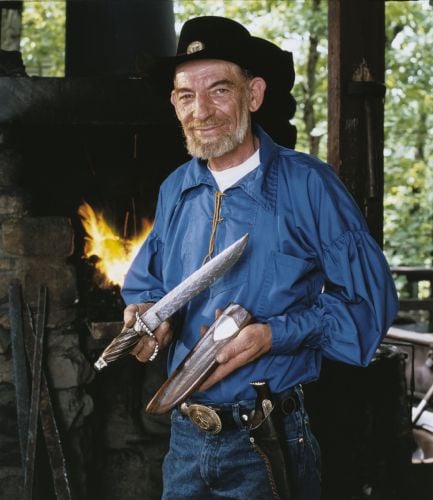 Some years ago on a fall day when the park was closed, I visited with Ray Johnson, a master bladesmith at Silver Dollar City.  Mountain Outfitters where Ray practiced his craft was empty of guests. We sat on stools in his workshop and he told me the intricacies of knife making, exhibiting his knowledge of metals. You see, Silver Dollar City had first heard about Ray Johnson back in 1986 when a local newscaster initially discovered him where he lived in Oregon County, Missouri. He worked as a welder, making knives and writing poetry in his spare time. The news reporter aired a story about Ray’s unique skills and his combination of talents. When CNN picked up the story, the world learned of the Bladesmith Poet from Missouri.

Ray had been a welder for 26 years, jumping into the industry right after high school. With decades of experience, he developed an understanding of steel, the properties of different metals, and how they can be molded together with heat and force. He began making knives in 1983. When Silver Dollar City learned of Ray’s skills as a knife maker and a poet, they offered him a job. Ray came to the park in 1988, and what began as a hobby became a talent recognized all over the world where many of his knives have traveled. Ray claimed all of his life experiences were to prepare him to become a master craftsman at the 1890’s themed park focused on preserving Ozarks crafts and creating memories for today’s visitors.

Not only did Ray Johnson make hundreds of knives at his shop in Silver Dollar City, he demonstrated his skills with showmanship, combining the swing of his hammer against red hot metal on an anvil with his recitations of poetry. I can still hear the “hiss” of a blazing knife blade when he plunged it into water to cool. He never missed a beat in his lines of poetry. Visitors who gathered around his forge for the demonstration often jumped back a bit when he suddenly thrust a new knife blade into a metal barrel to test its strength.

Ray’s most popular knife is the Damascus steel which incorporates 320 layers of steel that can cut like no other. He integrated different designs into his knives, making them one-of-a-kind creations. Some of his patterns date back to the 1880s. His knives took an average of six to eight hours of nonstop focus to complete. One slip of the knife, and the metal would be ruined. Ray made Inscription Damascus, which only he could replicate. His knives range in price from $180 to $5,000. Sixty percent of his sales were—and are—from collectors. He left the world of bladesmithing at Silver Dollar City with a long list of orders.

When Ray demonstrated his craft of forging knives at Silver Dollar City, he talked non-stop, explaining his knife-making tricks and weaving conversations with guests into his spontaneous rhyming verses. A humble craftsman of the Ozarks, he had no secrets. His deep voice, launching into sing-song poetry—sometimes humorous, sometimes profound—will be missed around the outdoor forge at Mountain Outfitters in Silver Dollar City. His book, Knife Facts, Opinions and Poetry, is still sold at the shop, along with an inventory of his knives. Not surprisingly, his book includes one of his favorite subjects:

“I know we’ll be eatin’
Fruit from the tree of life,
But how’re we gonna peel it
If we haven’t got a knife?”

An exerpt of another of Ray’s poems follows:

Lord I ain’t much with words,
I hope you understand
And I hope you’re fergiven’,
On that far away strand
Well I was just wonderin’,
When my fire burns real low
If you’d take me over yonder,
Where the sparklin’ river flows…

Ray Johnson’s fire burned low, and no doubt he crossed that sparkling river in his poems. However, the memory of his voice, his personality, and his master craftsmanship lingers at Mountain Outfitters. He was a role model, a guide to the other knife makers who produce approximately 300 knives annually at the Silver Dollar City store. All Mountain Outfitter knives are created in their entirety at the shop, starting with forging and ending with the final polishing. Guards and handles are also handmade and fitted at the shop not far off Silver Dollar City’s Main Street.