You are here: Home / Top Stories / Dreams And Realities Of RVing In Mexico
This post may contain affiliate links or mention our own products, please check out our disclosure policy here.

Do you dream of doing something completely different in your RV travels? If so, you’re not alone. One popular way that many of us mix up our routines is to go RVing in Mexico. 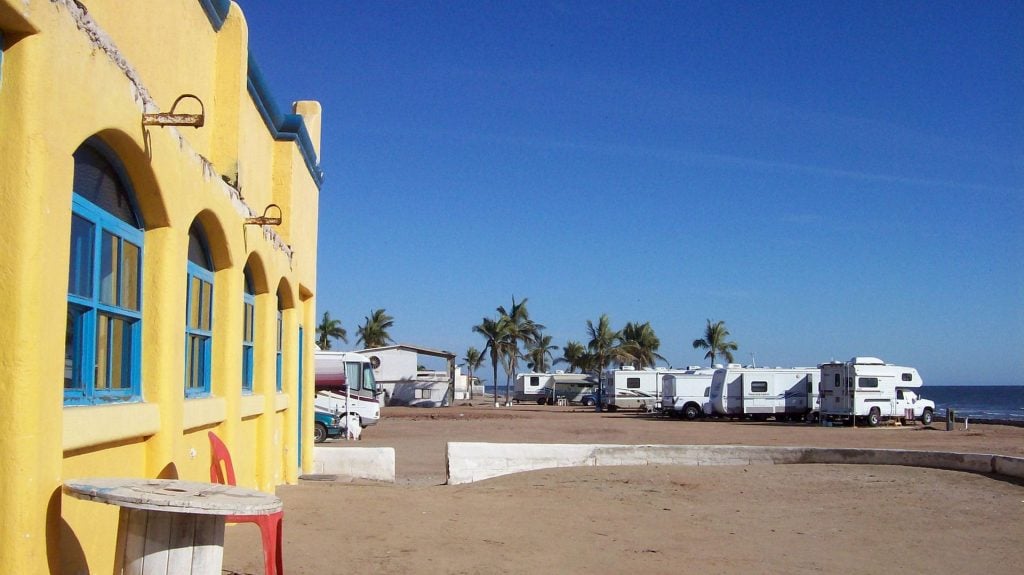 RVing in Mexico leads to all kinds of great adventures. Photo: P. Beddows

Escaping to a Margaritaville paradise is something that’s been on my agenda for years, but my co-pilot isn’t convinced…yet. In another effort to persuade him, I recently asked two experts about the current state of RVing in Mexico. Here’s what they said:

The real danger of RVing in Mexico 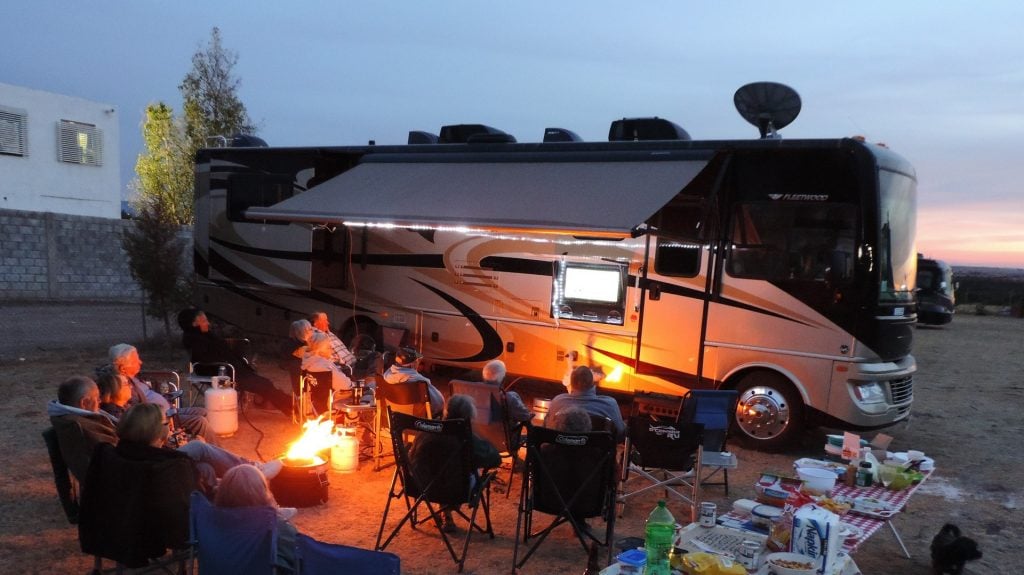 Many RVers are understandably nervous about RVing in Mexico. Stories about crimes against RVers regularly circulate on the Internet, leaving one more camper convinced that Mexico is dangerous. But Paul Beddows of Caravanas de Mexico RV Tours says otherwise.

“I’ve been going down there for 10 years and I’ve never had an incident,” he told me on the phone from his summer home in British Columbia. Beddows is the Canadian and American liaison for the company and travels with at least two RV caravans each winter season.

He’s aware of the occasional story about hijacked RVers in Mexico but says, “Usually when you look more closely at it, you’ll find they (the victims) were involved in the drug trade. Do that and you’re just asking to come home in a body bag. If you’re just going down as an RVer, drug cartels aren’t interested in hassling you.”

Surprisingly, he says that the biggest risk for RVers in Mexico isn’t crime, but damage to your rig. “It is hard on your RV driving down there,” he says.

The shake, rattle, and roll of taking your house down a Mexican backroad is much harder on RVs than in the U.S. or Canada. “We try to use the toll highways as much as possible. The more you’re on a four-lane freeway, the better off you are,” he says. 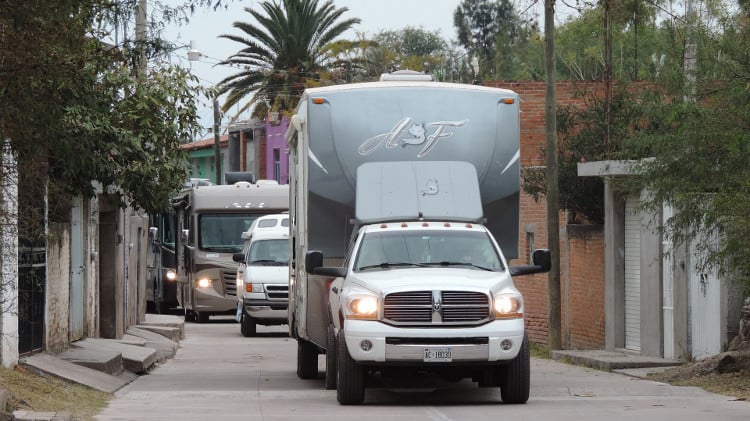 Still, there are days when you must travel on the free roads and that’s when trouble can happen if you’re caught unprepared. “You’ve got to take spare parts with you,” he says. “It’s almost impossible to find trailer tires in Mexico. If you’re lucky you’ll find light truck tires. I advise people to take off-rim spares because they don’t weigh much.”

Diesel truck owners are also in for a surprise when they learn that replacement parts are extremely tough to find. In Mexico, diesel pickups are uncommon. Few citizens own them and a diesel mechanic is a rare find.

Beddows and his colleague, Mexican native Gabriel Romero Chagoya, know all these valuable tips and more. Their company, Caravanas de Mexico, has the insider’s scoop on the best places to go RVing in Mexico and how to get there. For extra peace of mind, on every trip they utilize the services of the Green Angels, a quasi-public agency in Mexico that’s a cross between AAA and the police.

Instead of hitting popular snowbird stops like San Miguel de Allende, Caravanas’ destinations explore off-the-beaten-path places like Guanajuato, which Beddows says is “much more interesting.” The most unusual aspect of his company is that they tend to be more impromptu in exploring destinations once the caravan arrives. 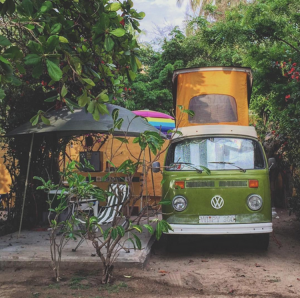 “We’re quite a bit more flexible than other companies,” he says. “We put together a lot of ad-hoc tours on the spot. We do organized tours but if people want to go somewhere, we’ll go.” From last-minute day trips to the Guanajuato mummy museum to an afternoon of Tequila tasting at distilleries, Beddows’ caravan wagon masters often go with the flow according to what the group wants.

Downsizing wisdom from a traveling family

Caravans are ideal for travelers who are laid back and “reasonably social,” says Beddows. Plus, they need to be OK with the funky setup at many RV parks.

“It’s not unusual to find a sewer connection that’s 20′ from the back of your rig. It’s a lot like RVing in the 1950s, but it’s an adventure. People who look at it as something different are the ones who have a good time. The ones who expect Thousand Trails Campgrounds will not.”

As for RVers seeking even more of an adventure, there’s always the possibility of going it alone and still having a good time. Nathan Swartz, 37 and his partner Reneé Stevenson, 35, founders of the travel publication Wand’rly, went RVing in Mexico over winter with another family, the Lins (known online as “Mali Mish”). The two families enjoyed the country so much that they kept traveling southward. Currently, the Swartz family is headed through Central America in their VW van. 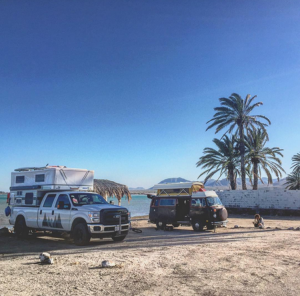 “We’re planning on heading all the way down to Costa Rica, maybe even Panama, if we can stand the heat as summer rolls in,” he said to me over email while stopped in Guanajuato.

The family’s little bus might seem claustrophobic, but that vehicle is the “ideal RV” for exploring Mexico according to Beddows.

“Frankly, our E-350 and 31′ Airstream trailer would have been incredibly limiting down here,” says Swartz. “Just about all of the really good stuff down here is either beaches that require decent clearance or city streets that are very narrow, have really big speed bumps, or sharp turns or something that would have prevented us from easily getting to where we wanted to go.”

Of course, there are trade-offs to living in the bus. The family has had one major breakdown along the way that required lots of TLC. Despite the problems, the couple takes it in stride, knowing things could be a lot worse if they had done this adventure in their Airstream.

“There’s loads of people who’ve come down here with newer vehicles like F-250s and Tundras and E-350s are having trouble getting various permits as they’re considered work vehicles or have too high of a GVWR, etc. Some folks have even been stranded in Guatemala as Mexico will let just about anyone through the US border, but not so on the way back north,” he explains. 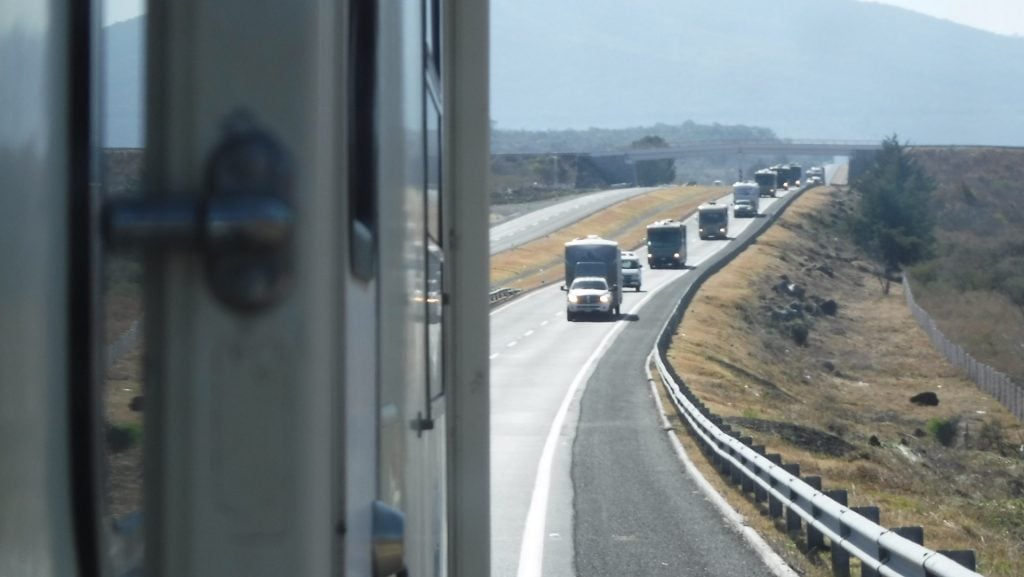 Mexico is for all adventurous RVers

Swartz’ family is unquestionably unconventional but that doesn’t mean mainstream RVers can’t have fun in Mexico and beyond.

“You’ll just need to know that even the main highways don’t have a shoulder, the roads are tight just about everywhere, and many of the campgrounds/RV parks just aren’t set up for big vehicles,” he tells me.

Beddows agrees. The biggest hazards of RVing in Mexico are those physical barriers that the Swartz family has encountered. This is why traveling with a caravan like his is wise for those who don’t want to downsize their rig.

With off-the-beaten path destinations like Manzanillo, the Yucatan and Chiapas, seeing the beauty of Mexico in the comfort of your own rig isn’t impossible as long as you travel with a laid-back attitude and experts who know the lay of the land.