You are here: Home / Blog / See the World’s Largest Wood Yo-Yo
This post may contain affiliate links or mention our own products, please check out our disclosure policy here. 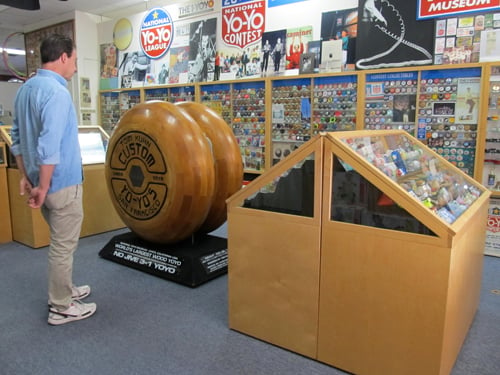 If you remember phrases such as “walk the dog” or “around the world” or “rock the baby” chances are you knew a few yo-yo tricks when you were a kid. If you’d like to relive a few of those memories and see the worlds largest public display of yo-yos and yo-yo memorabilia, head to Chica, California. The National Yo-Yo Museum (located inside the Bird in Hand toy store) has a vast collection of early yo-yos from the 1930s, as well as modern day versions that have become precision pieces of sports equipment. The world’s largest wood yo-yo ever constructed, weighing 256 pounds, is the centerpiece of the small museum. It was made by Dr. Tom Kuhn who started a yo-yo business in a basement workshop in San Francisco in 1977. His giant version was tested using a 150-foot crane and made the Guinness Book of World Records in 1982. 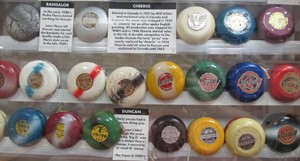 Yo-yos have been around for over 2,500 years— some historians claim it originally came from Greece, others say China. In the museum you’ll find an original Delft Tile from Holland, circa 1650-1675, depicting two children playing the yo-yo. In the United States, Duncan is best known for promoting the fad. Americans first heard the word yoyo in the 1920s when Pedro Flores, a Philippine immigrant, began manufacturing a toy labeled with that name. In the native language of the Philippines, the word yoyo means “come back.” Donald Duncan bought the rights from Flores in 1929, and then trademarked the name Yo-Yo. Duncan’s first contribution to yoyo technology was the slip string, consisting of a sliding loop around the axle instead of a knot. With this revolutionary improvement, a trick called “sleep” could be done for the first time. Duncan then introduced the butterfly shape, allowing players to do even more tricks. Media blitzes and contests enabled Duncan to reach its highest sales peak in 1962, selling 45 million units. Since then, yo-yos with ball bearings and other high-tech design elements have been patented.

The National Yo-Yo Museum was formed in 1993 to actively collect and interpret the history of the yo-yo. That year 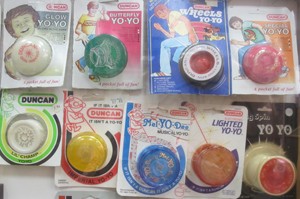 The National Yo-Yo Museum is open Monday through Saturday 10 am to 6 pm, Sundays 12 to 5pm. FREE admission.

From Highway 5 take the Highway 32 exit (Orland), follow signs to Chico (20 miles), once in town, turn left on 2nd. St (Chico State), drive east to Broadway, turn right, go one and a half blocks to 320 Broadway on the right. Street parking.