You are here: Home / Blog / The 19th Hole: Greg Norman-Designed Course to Open Next Year
This post may contain affiliate links or mention our own products, please check out our disclosure policy here. 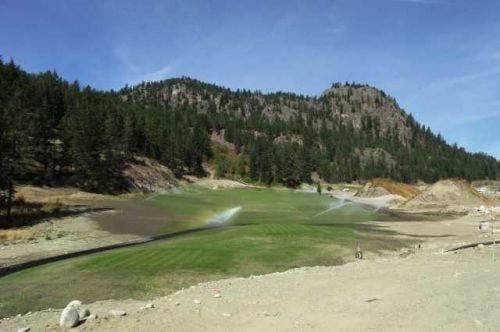 The Ponderosa Golf Course in Peachland, British Columbia is currently under construction and should be ready for play by next spring. The Greg Norman-designed course is located between the towns of Kelowna and Penticton and will offer great views of Okanagan Lake.

According to developers, the new Ponderosa course sits on the same site as an 18-hole executive course with the same name. However, the new par 72 golf course will measure 7,065 yards. It’s being built on 400 acres that will also include a golf academy, village center, winery, tennis facilities, hotel, and about 2,000 new homes which will be built over a 15 year period.

A total of 15 of the 18 holes will feature panoramic views of Okanagan Lake. Since this is a mountain-side course, the elevation changes will be plentiful throughout.

Though construction began in June 2010, there have been challenges along the way. Last fall, there was a fire that slowed down the building progress, along with a recent stretch of nasty winter weather. They also faced designing around wildlife habitat and environmentally-sensitive areas, which include protected snowberry bushes, wolverine dens, Ada Creek, and various wetlands. When completed, this will be the first Greg Norman course built in British Columbia.

The championship course gently wraps around the base of Pincushion Mountain and features a mix of hole lengths and challenges. There’s a stunning par 3, 191-yarder, and an amazing 656-yard, par 5. The finishing hole is a dramatic 552 yards situated on a ridge running parallel to and offering spectacular views of the ubiquitous Lake Okanagan.

Norman, who spent 331weeks as the world’s number 1 ranked golfer, said of the Ponderosa Golf Course, “The character of the site gives us an enormous opportunity to provide a signature course with breathtaking views from all aspects. It’s our goal to utilize the natural features of the site, such as the calm backdrop of Lake Okanagan, the Ponderosa pines, and the spectacular views to create a unique golf experience.”