You are here: Home / Blog / The Full-Timing Nomad: Another Full-Timing Budget Item
This post may contain affiliate links or mention our own products, please check out our disclosure policy here. 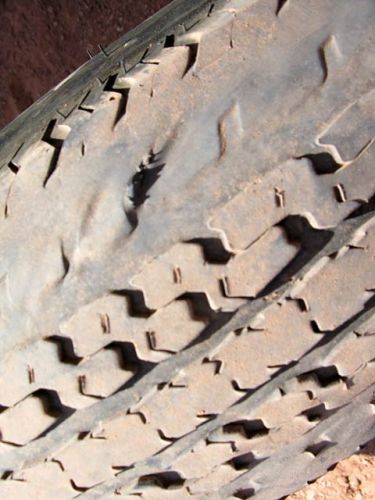 Understanding what RVing costs when you’re a full-time RVer is key to a never-ending road trip. But there’s one hurdle to acquiring this knowledge, which is that everyone’s road trip lifestyle is different. What one person considers extravagant another person sees as essential. Some of us are self-avowed cheapskates while other folks wouldn’t go near a discount store.

So how is the full-time RVing dreamer supposed to budget for a financially secure life of adventure? One of the easiest places to start is to research the cost of ownership for the RV you’re dreaming about or already own, then see if your income can cover it with room to spare. RV.net features an excellent blog post about determining cost of owning an RV at http://blog.rv.net/2009/10/the-yearly-costs-of-owning-an-rv-part-1-of-2/.

A Lesson for Fifth Wheel Budgeting

When we did our own research to determine an ideal full-timing RV, we concluded that a fifth wheel and three-quarter ton truck combo would be right for our budget and lifestyle. We found the cost of ownership to be lower than a Class A motorhome and tow vehicle, mainly because with a fifth wheel we would only be dealing with the maintenance of one vehicle engine. And because fifth wheels lack engines, maintaining this type of RV is a bit less complicated and as a result, less expensive. The setup has been exactly what we hoped it would be, but just when we thought we had every budget aspect of fifth wheel ownership figured out, an unexpected mechanical issue occurred as we set out on a winter snowbird adventure.

It started early this year while taking a leisurely jaunt from California to Colorado. We noticed an odd wear pattern developing on the tread of one of our fifth wheel tires but unfortunately we made the mistake of deciding to keep an eye on it. That was a mistake, because within several hundred miles of its appearance we endured a near-fatal loss of tire tread immediately after adventuring down a lonely desert road to a pretty boondocking site in the Utah desert.

The catastrophe we avoided was apparent. We quickly bought a new tire in the nearest town, but within a few hundred miles the scary tread pattern appeared again. This time we made a beeline to a RV alignment shop and learned that our axles were misaligned by 1/2”, which might as well have been a foot!

According to the alignment shop owner, RV trailer axles become misaligned for many reasons and for  folks like us who use our RVs full-time and place unusually high mileage on them, we should get an axle alignment performed at least every two years. With a cost of just $125 per axle, it’s a bargain compared to what could have happened if we suffered a blow-out on the highway. We also had our trailer wheel bearings repacked, which we’ve been doing every two years.

With those expenses out of the way, we’re back on the road and feeling good about our rig once more. But this relatively inexpensive lesson will go down on our budgeting spreadsheet as two line items that need to be addressed again in two years, thus adding to our overall cost of ownership for our Arctic Fox fifth wheel trailer.

At times like this I realize that with every new mile we put on our rig, an education to last a lifetime is unfolding right in front of us. The trick is to remember those lessons and learn from them so that we don’t repeat yesterday’s mistakes tomorrow.