You are here: Home / Blog / The Silver Gypsy: Memorials
This post may contain affiliate links or mention our own products, please check out our disclosure policy here.

by Sharlene Minshall - The Silver Gypsy
October 22, 2014Filed under: 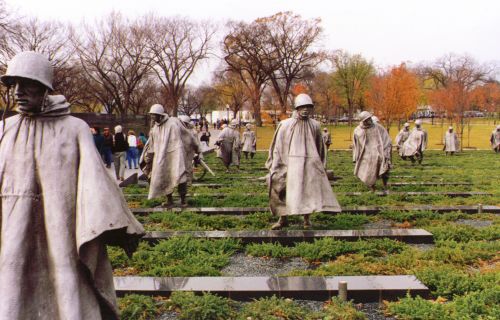 In my travels, I have visited many, many, MANY memorials, memorials to the early pioneers, to one early pioneer, to famous people, to presidents, to various eras and roads and definitely to each legendary war and its heroes.  There are monuments to famous homes and shrines and poets and authors, plus tributes to ranges of mountains.   There are marble and stone monuments in local cemeteries representing loved ones.   You get the picture.  We have monuments to places for all kinds of reasons and to the sizes and shapes of countless “things” that are the highest, longest, deepest, lowest, widest, etc, as in monuments to fish, crab, and wind.

We are all familiar with Mt. Rushmore and Chief Crazyhorse (still unfinished) in SD and NH’s natural monument to the Old Man of the Mountain (crumbled a few years back).  A lesser known one is the statue to Hannah Duston, a colonial MA Puritan and mother of nine who was taken captive by Native Americans in 1697.  Eventually, she made her way back to her family after killing ten of her captives at night.   She was the first woman in the US to be honored with a statue. 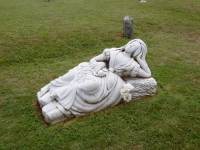 On NH’s Mt. Washington Summit, a sign commemorates the wind.  It is the confluence of 3 major continental storm tracts.  Hurricane wind forces occur two out of every three days.  The highest windspeed ever recorded on earth was 231 miles per hour in 1934.

I sat and chatted for some time with Robert Frost at the Old Bennington Cemetery in Bennington, Vermont.  You might recall this portion of one of his poems:  “I shall be telling this with a sigh; somewhere ages and ages hence; two roads diverged in a wood, and I, I took the one less traveled by, and that has made all the difference.”  Sound like an RVer?

Joining the rails of the First Transcontinental RR across the US connecting the Central Pacific and the Union Pacific at Promontory Summit, Utah Territory, is a monument to human ingenuity.

The Nomadic hunter-gatherers and ancestral Puebloans who roamed this land 10,000 years ago left their messages painted or carved into the rocks.  We might not know what they say, but they are monuments to the lives of our ancestors.

Since 1932, nestled on the U.S. and Canadian border of North Dakota and Manitoba, Canada, in a symbol of friendship, is a “One of a Kind” International Peace Garden.  Reflecting pools and dazzling colorful floral displays of over 150,000 flowers splash across the grounds of the Formal Garden’s terraced walkways, a monument to peace between countries.  You cannot walk those garden paths without thinking about the amazing goodwill we enjoy with neighboring Canada. 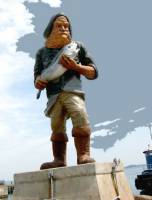 All these monuments are to honor someone or something that is amazing and they are wonderful.  But generally, monuments are just something to look at and my opinion is that it is time to make monuments “useful” in some manner rather than just something to view.  Case in point, the “Where Angels Play” project where twenty-six playgrounds are being constructed with all costs and labor donated to honor the 26 victims of the Sandy Hook shooting.  Volunteers are building these playgrounds to be enjoyed by youngsters for decades to come.

What an incredible way to honor those who were stolen from us by the vicious side of society.  God Bless until next week.