You are here: Home / Blog / The Silver Gypsy: My Daddy and Me
This post may contain affiliate links or mention our own products, please check out our disclosure policy here.

by Sharlene Minshall - The Silver Gypsy
June 11, 2014Filed under: 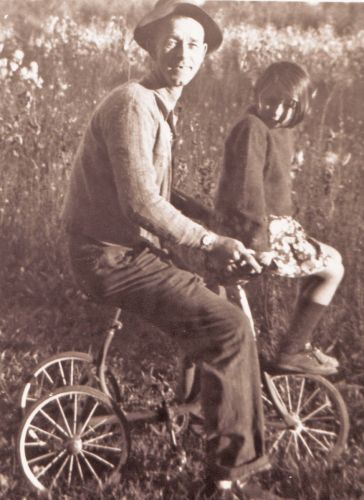 I just realized that I’ve written about my mother several times over the years, but I never really told about my Dad.  Firstly, I loved him with a passion.  Secondly, he was tall and thin, neither of which I inherited.  Both my parents had blue eyes so I received a good dose of eye color.  The other thing I inherited from him that I am not especially thrilled with is an embarrassing ability to cry at the drop of a hatpin whether I am sad, happy, or as mad as a bull.

He was a hard worker.  He had to be considering there were four boys and a girl to feed, clothe, and generally raise them to be whatever they were going to be.   In earlier years, he and my mother and four brothers lived in and around Niles, MI.  I was born in a log cabin he and an uncle built from logs from our woods.  We lived next to the Dowagiac Creek near Dowagiac, MI.

Dad grew up between wars so he was never in the service although he had two marine sons that fought in WWII, one Army son who fought in Korea, and another son who was in the Army.  I know that he worked on the railroad and for the county road commission.  The one memory I have of his working years was during WWII.  My mother baked homemade bread and my youngest brother and I would join them for a snack of hot homemade bread with butter (probably oleo mixed with coloring) underneath the stairwell with a curtain pulled around.  Those were “blackout” days when you didn’t let any light show at night so we couldn’t be bombed (or so I remember it).  At that time he was working at Bendix in South Bend, building airplane parts (or so I remember it).

We lived on a 90-acre farm and probably 30 acres of that was woods, so the rest was put into corn and a big vegetable garden.  We raised chickens and pigs and at one time they had a couple of cows and horses.  I don’t think there was electricity in the log cabin for a while, and we didn’t have indoor plumbing (we had the kind where you went to the two-holer out behind the lilac bush) until a manual pump was put in the kitchen.  We had a huge cook stove with a reservoir in it for heating water.  I’m sure that our woods provided wood for the cook stove. 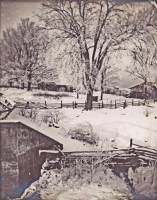 Daddy and perhaps one or two brothers built me a playhouse down in the lower yard by the fence that held the animals in.  I loved that, but I loved even more the one I created in the area above the garage in our barn.  The “loft” was filled with “stuff” that I moved around until I had a playhouse for me and my cousin, Sara, (from up the creek bank) to play in.   I have pictures of the farm with all kinds of vehicles at the edge of the fields in one condition or another.  I remember my brothers and my Dad tinkering and making various runnable “cars” to be used for plowing or whatever.  I have the feeling that the tricycle in the picture with my Dad and I was one built out of these various vehicle pieces.

It seemed like the winters had deeper snow then because Daddy always helped me dig into the banks of snow in the yard and have snow houses, and one year he made one out in the fence row near the edge of the field.

He was quite smart but did not have an education beyond high school.  There was only enough money for his parents to put his older brother through college and he became an architect.  I don’t know the circumstances behind that decision, but I wonder if my dad was ever disappointed in that.  If he was, I didn’t know it.

My mother died in childbirth when I was 10.  Dad remarried when I was 12 and we moved to Sister Lakes, MI and he owned and operated a gas station and rented boats.  During those years, my stepmother and dad, along with a handful of other local people, were instrumental in starting the Sister Lakes Community Church.  The church wasn’t finished when I got married, so we tied the knot at the Silver Creek Methodist Church a few miles away.

After I was married and had my two daughters, my stepmother eventually went into a nursing home and Daddy came to live with us for a year.  He probably started smoking when he was 11 or so and he tried desperately to stop, especially when he came to live in our house.  I never bugged him about it, but he would bring me all his cigarettes to throw away with such determination to quit, but then he would go down to have coffee with his friends at the drugstore every morning and, sooner or later, I would see a curl of smoke coming from under the bathroom door.  Sadly, he died at age 62 of lung cancer before his year with us was out.  My husband was so good to him, as he was his own Dad.

My Dad wasn’t rich or famous or overly educated, but he was a loving, kind, honest man and I feel blessed that he was mine.  I hope you will give your father a big hug this Father’s Day, and if you can’t do that, I wish you good memories.  God Bless until next week.