You are here: Home / Blog / The Silver Gypsy: The Grandson
This post may contain affiliate links or mention our own products, please check out our disclosure policy here.

by Sharlene Minshall - The Silver Gypsy
July 31, 2013Filed under: 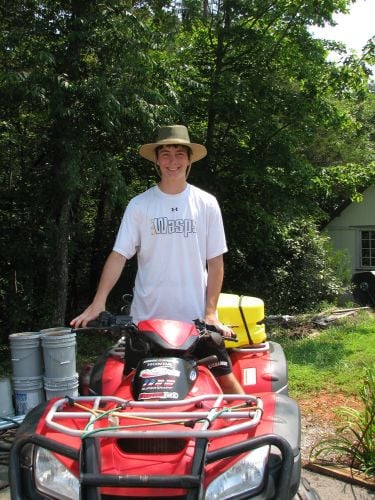 One of the things I love about visiting my daughter’s mountaintop home is that it is surrounded by trees, well off the road, and we almost always see animals.  We have often seen single deer, but a doe and twin fawns stay nearby as well.  One morning Will pointed out a family of wild turkeys.  Even he was thrilled the day we saw a mother fox with three kits dashing across their driveway, a rare occurrence.  Colorful flowers lounged in their extremely green yard and an already huge mushroom doubled in size over a couple of days.  The devastation of the cicada invasion was plain with the dead end branches visible in so many trees.

Will always has a list for jobs he needs to get done for the day, mowing, trimming, mulching, planting, checking the organic garden for produce.  He just received his permit to drive with a licensed adult and needed to document hours driven for his final dash to a license.  He also plays football, soccer, lacrosse, and wrestles so he works out several times a week at Lynchburg’s beautiful YMCA.

They have a family membership which I was able to get in on for a minimum fee so I could swim while Will worked out.  Another perk was being able to get Internet while we were there.  And with Will being part of the computer generation, he knew how to get me started on that plus setting up my new cell phone and answering a million questions.  All for the price of allowing him to drive me wherever he could possibly figure out we absolutely needed to go.

That included going to a nearby Starbucks where he treated me to a cappuccino he bought on his own card.  I must say that with all of his chores, he earned it, but it was really nice that he was sharing his wealth.  Several times Will skipped the workouts and instead swam with me.  That was fun although he let me get half way across and with about three strokes he passed me.  Being 6’ with long arms doesn’t hurt and he loved winning against 5’1” granny.

Driving his own country road is a lesson in learning to drive.  It is narrow with no shoulder and twists and turns through the trees and over the hills like a roller coaster.  Other roads in this part of the country aren’t much straighter but some of them have yellow lines in the center and white ones on the edge.  He also drove on major highways that surround the city.  I will never understand a driving course that includes ONLY the book learning and the actual drivers training is left up to the parents.  What if they aren’t good drivers!  When I took Driver’s Ed back in the dark ages, we went out with an instructor, several other students, and actually learned how to drive and deal with the problems of the road and other drivers.  Of course, it was probably easier with a horse and buggy!

One of our trips included taking his Grandma Sue to the newly reopened Peaks of Otter Restaurant up on the Blue Ridge Parkway, a magnificent spot overlooking a lake and in the distance to Rocky Top, a great place to hike to for an amazing view of the Smoky Mountains.  Will even offered to buy our lunch but we thought that was a bit ambitious so both grandmas split the tab.  God Bless until next time.