You are here: Home / Blog / Go Lakeside Camping In Topeka, Kansas
This post may contain affiliate links or mention our own products, please check out our disclosure policy here.

Topeka, Kansas is well known for the landmark 1954 Brown v. Board of Education Supreme Court case that ended segregation in public schools. Today, the state capital and fifth largest city in the Jayhawk State is a vibrant and spirited community with lots to see and do.

One of the main attractions in Topeka is Lake Shawnee, which offers fishing, boating, sailing, and swimming. The 141-site Lake Shawnee Campgrounds is also a popular destination for visiting RVers. The pet-friendly campground features 30/50 amp electrical, water, a dump station, showers, and laundry facilities. 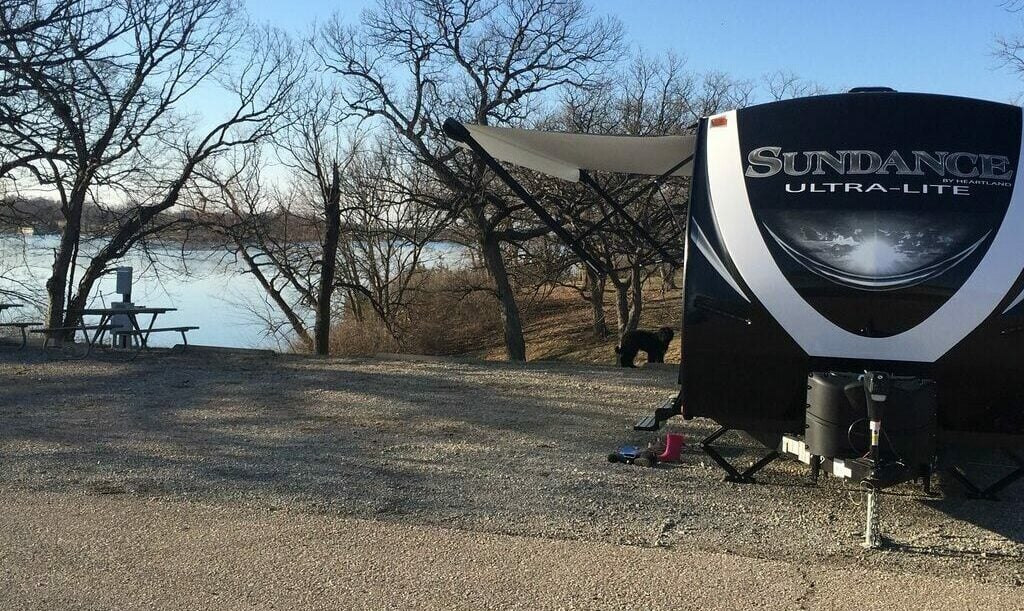 Within the 1,100-acre park surrounding the lake are trails, a marina, tennis courts, shelter houses, ball diamonds, an arboretum, 9 ½ acres devoted to beautiful gardens, and a well-manicured golf course.

Lake Shawnee Golf Course is a year-round track that stretches to 6,357 yards from the back tees. The 18-hole par 70 course opened in 1972 and is still one of the top courses in Topeka. Many holes of the golf course bring together breathtaking views and the challenges of playing alongside Lake Shawnee.

Another popular Topeka attraction is the Evel Knievel Thrill Show and Museum. Robert Craig Knievel gained famed in the 1960s and 1970s by attempting more than 75 daredevil stunt jumps on a motorcycle.

Knievel’s most daring jump took place on New Year’s Eve 1967 in Las Vegas as he attempted to jump 141 feet across the Caesars Palace Fountains using a Triumph Bonneville T120. He crashed on landing and spent the next 29 days in a hospital with various broken bones. Less than six months later, he was jumping again, which only fueled his legacy as the world’s best stunt man.

The Great Overland Station should be on your must-visit list while in Kansas. This elegant building formerly housed the Union Pacific Station. Today, it serves as a museum and education center that brings Topeka’s railroad heritage to life through photographs, special exhibits, and costumed docents.

There is much more to see and do in Topeka. For more details, check out www.visittopeka.com. You can also learn more about Lake Shawnee Campground on RV LIFE Campgrounds.

See also: Our Favorite Places To Visit In Wichita, Kansas