You are here: Home / Blog / Visit the Great Lakes Shipwreck Museum
This post may contain affiliate links or mention our own products, please check out our disclosure policy here. 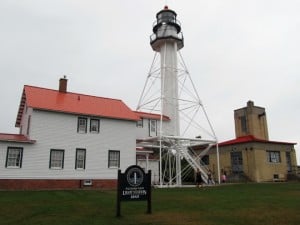 Gordon Lightfoot’s haunting song lyrics from The Wreck of the Edmund Fitzgerald tells the tale of a frigate that sank to the bottom of Lake Superior on November 10, 1975 in a storm near Whitefish Point, Michigan. Although the ballad goes into much detail about the lost crew of 29 men and the tragic circumstances, the story really comes to life at the Great Lakes Shipwreck Museum located at the Whitefish Point Light Station. Not only will you get the full story and hear rare Coast Guard radio chatter, but the Fitzgerald’s original 200-pound bronze bell is also on display. The museum chronicles other local maritime history as well—from the first known shipwreck of the Invincible in November 1816, to the building of the lighthouse, and establishment of a Lifeboat Rescue Station in the early1920s. Visitors can also tour the fully restored 1861 Lightkeepers Quarters. 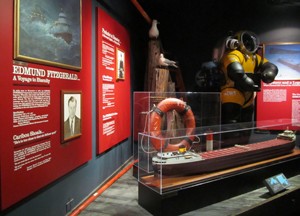 The Edmund Fitzgerald exhibit is the centerpiece of the Great Lakes Shipwreck Museum.

Whitefish Point, located at the extreme southeastern end of Lake Superior, has been called the “graveyard of Lake Superior.” Of the 550 known major shipwrecks lying on the bottom of the lake, at least 200 of them are in the vicinity of Whitefish Point. The 80-mile stretch of shoreline from here to Munising, Michigan is especially dangerous because of the congestion and bad weather. It is a critical turning point for all vessel traffic entering and leaving the largest of all the Great Lakes, and with an expanse of over 200 miles of open water, terrific seas can build up during a Superior “Northwestern” storm. The Whitefish Point Light Station was established by Congress in 1849, and since then, a life-saving beacon has continuously illuminated these dangerous waters.

The Great Lakes Shipwreck Museum was voted as the “Best Art Gallery/Museum” in 2014 by Lake Superior Magazine readers, and is definitely a highlight of Michigan’s Upper Peninsula. While the Edmund Fitzgerald is the centerpiece of the museum, its many artifacts and exhibits tell stories of several other ships and sailors who braved the waters of Superior, and the ongoing underwater exploration of these and many more shipwrecks.