You are here: Home / Blog / World Champion Cardboard Boat Races
This post may contain affiliate links or mention our own products, please check out our disclosure policy here.

At the end of July every summer for the past 29 years, my hometown has thrown a beach party on the shores of Greers Ferry Lake. A race—a contest, in fact—built on cardboard, duct tape, glue, paint, and wildly enthusiastic oarsmen (and women, boys, and girls) who step up to the challenge of keeping afloat a boat with a fake motor and a hull of water soluble cardboard. Competition is fierce and folks come from beyond Heber Springs—even from beyond Arkansas borders—to participate. After all, it is a World Championship! Many form teams in their companies or corporations; others compete individually or with a friend or family member. Prizes are awarded, including “Pride of the Fleet” for the best engineered boat, “The Captain’s Award” for the most creative team and boat, and “The Titanic Award” for the boat that sinks dramatically despite sailors’ efforts to keep it skimming across the lake’s surface water. Rumor has it that some boats are built to quickly fall apart just to win the award. 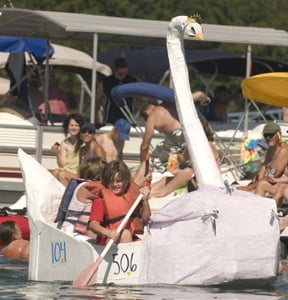 In past years, boat designs have included a Batmobile, a space shuttle, the USS Missouri, and pirate ships, as well as swans and dragons. For 2015, the theme is “Flip-flops and Pop Tops,” drawing on a laidback style characterizing singer/songwriter Jimmy Buffett. According to Julie Murray, executive director of the Heber Springs Chamber of Commerce, “Participants can copy Buffett’s island style or design a boat on the lyrics of one of his songs.” Of course, no one would rule against another Batmobile, trumpeter swan, or USS Missouri. 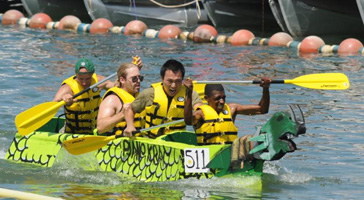 Construction rules for the boats are strict. Many participants begin their projects weeks in advance; a few tape together a model the night before the races. However, the basic building material is corrugated cardboard that can be waterproofed with varnish, paint or polyurethane. Decorations are permitted, but cannot affect structural strength or buoyancy. Fastening material can include duct or masking tape, liquid nails adhesive, caulking compounds, metal, staples, clamps, and screws. However interpretation of the rules remains with the judges. In other words, judges have been known to thrust a knife into the boat’s hull to test its building materials. The crew compartment can not be enclosed to restrict any escape from a sinking boat. Every person on board the floating cardboard must wear a life jacket. 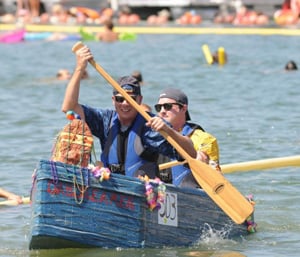 Pirates on a Treasure Hunt

The races will begin at 10:00 a.m. on July 25 at Sandy Beach, a city park on the western edge of Heber Springs, unless lake water remains too high. If the water due to heavy spring rainfall does not recede sufficiently, the annual event will move to Dam Site Park. Changes of location can be noted on the Heber Springs Chamber of Commerce Facebook page. 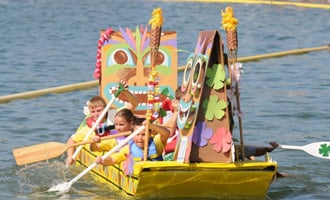 All Ages in Cardboard Boat Races

The races occur in three heats. The second round is made up of the cardboard boats that survived the opening race. The third heat is called the “Demolition Derby,” a fight to the final sinking. In this heat, boats can ram into each other, one “captain” aiming to sink the other. After all, what is there to save? Water soaked cardboard does not hold over for the next year’s contest.

The Lucky Duck Regatta is a new event this July. For kids ages two to twelve, the rubber ducks will race at noon between the second and third heats of the boat races. Rubber ducks will be available for $1 each for the first 50 children who register. Two age defined categories, children two to six and older ones, seven to twelve, will propel their ducks in the race with a water gun. Other activities include a Treasure Dig at 10 a.m., the Watermelon Eating Contest at 11 a.m., and Volleyball Tournament at 10 a.m. Registration for these events begin at 8 a.m.

For RVers who want to attend the Cardboard Boat Races, sites to accommodate all sized rigs are available at Dam Site Park, a U.S. Corps of Engineers park northeast of Heber Springs.