You are here: Home / Top Stories / Don’t Drive Under This Overpass In Durham, NC
This post may contain affiliate links or mention our own products, please check out our disclosure policy here.

Low overpasses are an RVer’s nemesis. It’s not uncommon for trips to be disrupted and detoured due to low clearance structures. If your travels lead you to Durham, NC, be very aware of the Norfolk-Gregson St. Overpass, known simply as the 11-foot eight bridge.

This overpass has gained notoriety for being the fate of roofs of trucks, moving vans, and RVs due to its devastating low clearance. Take a close look at this video for a firsthand account of what happens to over-height RVs traveling under this bridge:

Located at the intersection of S. Gregson St. and W. Peabody St. in a popular area of Durham, the overpass has been dubbed the “Gregson Street Guillotine” and the “Can Opener Bridge” by the media and the general public. In fact, at one time the low clearance bridge would cause at least one overpass accident a month for over-height vehicles.

While clear signage surrounding the bridge has been installed throughout the years to ensure driver safety, incidents keep occurring. General causes? Drivers who would ignore the clearance signage located on both sides of the road, the flashing warning lights overhead, and/or quite simply, the entire overpass itself (until it would be too late).

“We are having a hard time figuring out exactly why this is happening,” says John Sandor, Deputy Division Traffic Engineer for the North Carolina Department of Transportation – Division Five. “It’s kind of a phenomenon and it seems to just creep up on folks who don’t yield to the signs. The overpass was built in the 1900s when vehicles were not as tall as they are today. But it has had appropriate signage and it was over signed if anything. Still, these types of crashes have taken place.” 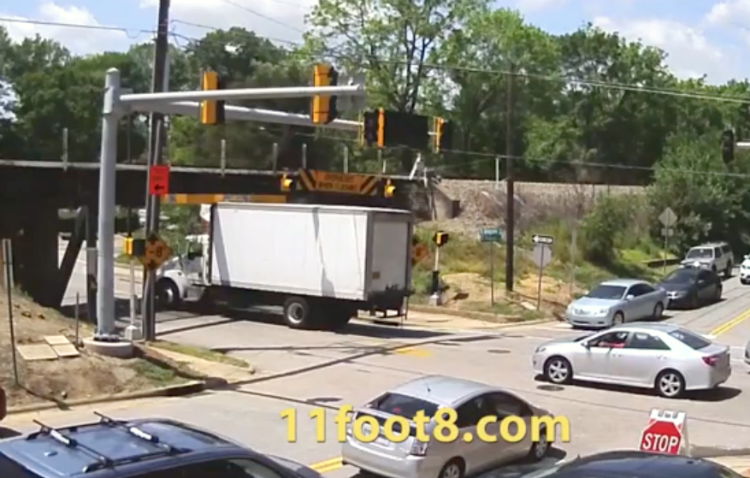 A truck getting stuck under the overpass. Photo courtesy www.11foot8.com

The bridge is owned by the North Carolina Railroad and while construction efforts have been considered to raise the bridge or lower the road, it’s not as easy as it sounds. For example, to make it higher would mean having to raise railroad crossings overhead, while making the road lower is not an option as major sewer lines lay a mere four feet under Gregson St.

“If this was an easy thing to address, it would have been done by now,” says Sandor. “It would be a very significant construction project and very costly to complete. There’s also a train station down the road so that would be a whole other world of changing things. That leaves to lowering the road, but it’s already in a low spot in town so there are drainage issues.”

Ten years ago there was an increase in impacts. There was a warning sign installed with a height detector that would trigger flashers to go off, and warn drivers of too low of a clearance. That had some impact but we have seen the problem come back over the last five years. We felt the need to take another step to see what else can be done. That’s where we are today. 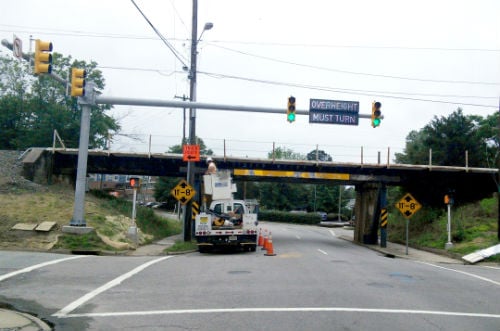 A new traffic signal was recently put in place right before the overpass. This automatically indicates over-height vehicles that will not make it under the bridge. Photos courtesy www.11foot8.com

Take measures against this overpass

Despite the high number of bridge collisions on Gregson St., RVers do have alternatives. For instance, GPS technology offers several features for precise navigation. RV trip planning tools such as RV Trip Wizard allow RVers to easily custom build a route to avoid low clearances, find alternate roadways, with many other features to safely arrive at a destination.

As a starting point, according to Sandor, it’s recommended to stay away from U.S.  15-501 business routes in Durham to avoid any encounters with low bridges (including the Gregson St. overpass). As a further safety measure, the city recently put a new traffic signal in place right just before the overpass that automatically indicates over-height vehicles at the intersection.

“It just works out that there is a frontage road. A new system is in place that now automatically signals a turn-off point for over-height vehicles,” says Sandor. “An over-height vehicle will trigger the signal (that clearly reads “overhead vehicle detected – must turn”). The signal will hold red for what we hope will be long enough for drivers to think twice. They can then turn left or right and avoid the bridge altogether.”

The Norfolk-Gregson Street Overpass leads to a popular business area with restaurants, shopping and other attractions that can be distracting. RVers must be cautious and stay alert to prevent becoming victims.

“The new signal may not be the final cure,” says Sandor. “At least we know now that drivers with over-height vehicles are starting from the signal at 0 mph. They now have time to recognize the overpass and determine if it’s too low to drive under.”