You are here: Home / Blog / New Book Reveals Arnold Palmer Away From Golf
This post may contain affiliate links or mention our own products, please check out our disclosure policy here.

by Rick Stedman
September 9, 2018Filed under:

It has been two years this month since golfing great Arnold Palmer passed away, but the humble Latrobe, Pennsylvania resident will never be forgotten.

Earlier this year, fellow Latrobe resident and longtime journalist Chris Rodell penned a book that truly reveals what most everyone the world over already knew: that Arnold Palmer was truly one of the nicest, kindest, most honorable people to grace the game of golf.

Arnold Palmer: Homespun Stories of The King shares stories from friends and residents from the small town of Latrobe, about 40 miles east of Pittsburgh, where Palmer called home his entire life. 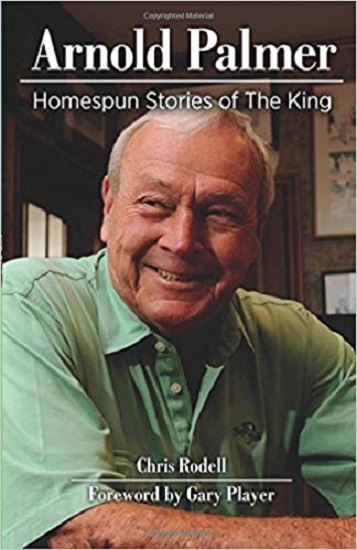 The book is chock full of anecdotes and insights from locals, along with reflections from CBS golf analyst Jim Nantz and nine-time major championship winner Gary Player, who wrote the book’s heartfelt foreword.

In addition to Player’s foreword, a few highlights include:

The author draws from more than 100 interviews in all, spanning two decades, and providing an intimate, charming, and down-to-earth glimpse at the iconic Palmer outside the spotlight.

That’s just the kind of individual he was, which is why during his prime playing years he easily acquired a following affectionately known as “Arnie’s Army.”

Even if you weren’t privileged to know Arnold Palmer in person, after reading “Homespun Stories of The King” you could easily imagine that warm personality reeling you in.

The 240-page “Arnold Palmer: Homespun Stories of The King” by Chris Rodell is available on Amazon and in bookstores nationwide.

You may also like: Arnold Palmer Memoir Will Inspire You – On and Off the Course