You are here: Home / Blog / How I Rescued My Wife On A Narrow Forest Road
This post may contain affiliate links or mention our own products, please check out our disclosure policy here.

My wife and I, plus another RVing couple, thought it would be fun to travel to Oregon to view the solar eclipse in totality on Monday, August 21st, 2017. The plan was my wife and I would go early to reserve a large boondocking spot in the mountains on the Wednesday morning before the eclipse. Then our friends would drive down from Washington and join us Thursday evening.

I also believed by arriving five days before the eclipse we would be in front of any of the predicted traffic problems. To avoid being bored for the days leading up to the eclipse, I found (via online research) an area with activities and places to explore that would keep us occupied while we waited for the main event. I also learned, via online research, that ground zero for the eclipse activities in central Oregon (or so I thought) was Madras, where one hundred thousand people were expected. 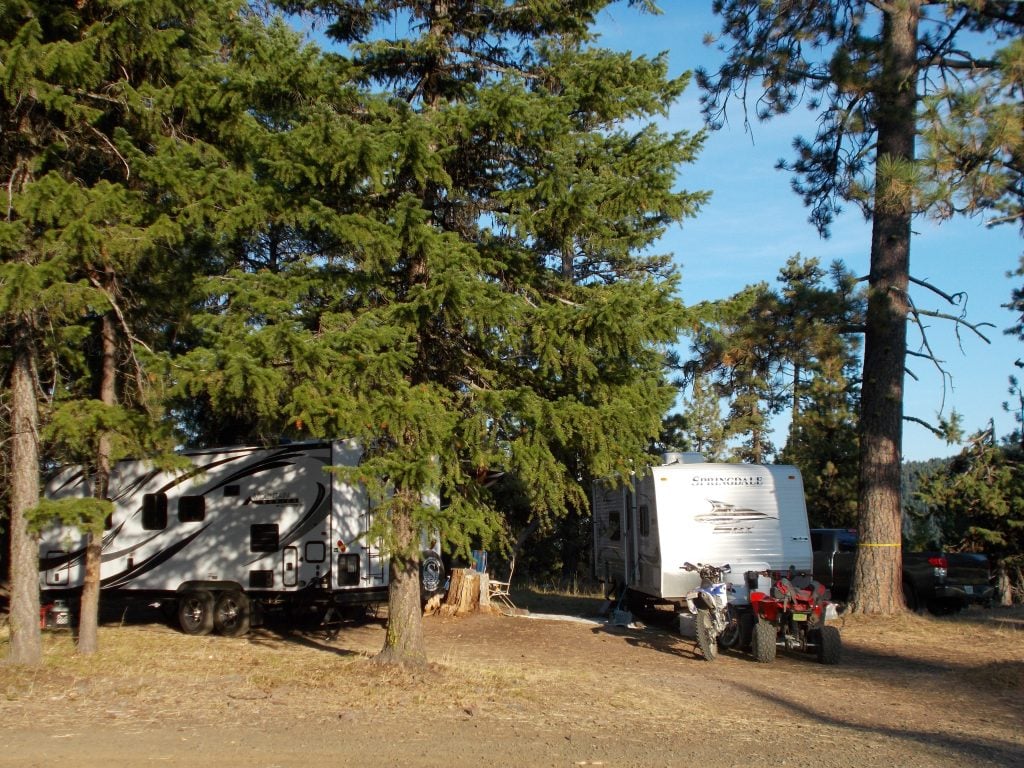 After selecting an area high in the Ochoco Mountains where it would be cool, there would be things to do, and we would be well away from any city, I went on the Ochoco National Forest website to see if there were any “Alerts” I needed to be aware of.

Other than the closure of a dispersed camping area and a bridge closure that didn’t affect us, I even looked at a special page they had set up for the eclipse which stated, “We are open for eclipse viewing! Whether or not you plan to camp, the Forest and Grassland are public lands and will remain open to visitors who wish to find a spot to view the eclipse. There are no special closures or restrictions planned during the eclipse.”

Having done my due diligence, I recorded the coordinates for the boondocking campsites that lay in the area and the places we wanted to explore and awaited the day of departure.

We arrived in Oregon Tuesday and camped that night about 30 miles from the area we wanted to camp for the eclipse. My thought was we would get up early, fill the tow vehicle with gas, fill the travel trailer with water, and be camped by lunch.

My first clue that something was amiss was when we arrived in Prineville, Oregon and the fuel stations and grocery stores were overrun with people looking like they were headed for Woodstock.

The next concern was as they left the gas stations and grocery stores they were headed in the same direction as we were.  No problem I thought, as they will continue east on Highway 26 toward the center of the longest eclipse totality, while the place I had selected was south of the center line. 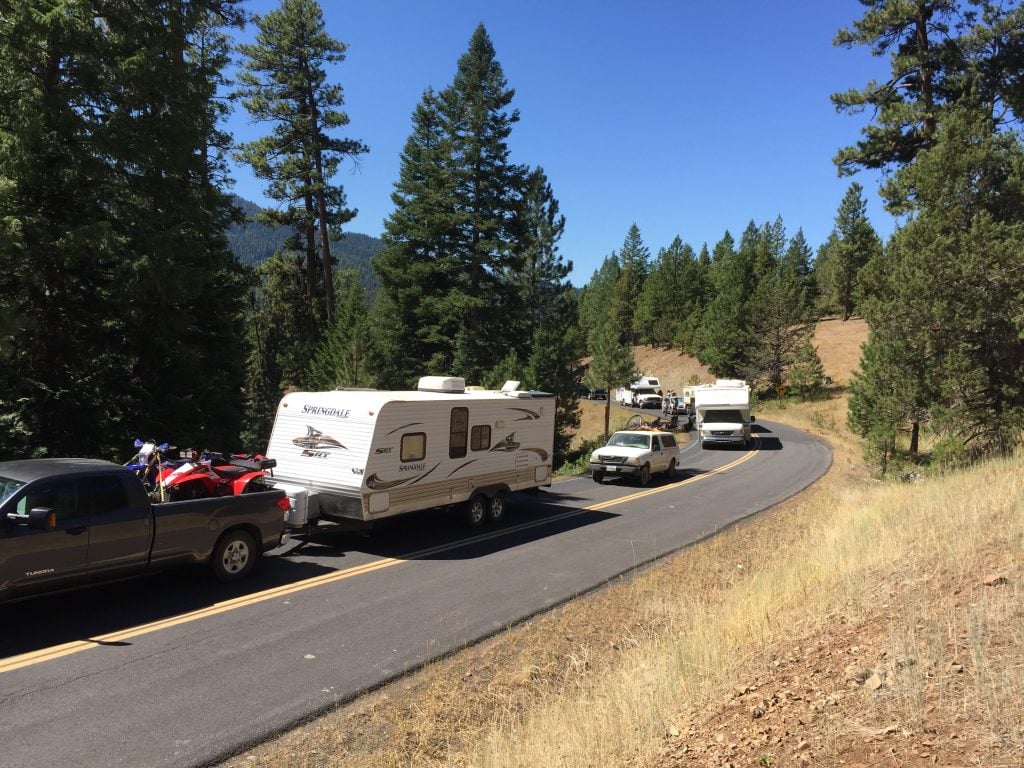 However, when we reached our turnoff from the highway, there were flagmen directing traffic onto the same road! That is when we saw our first “Event” sign pointing people in the same direction as the area we wanted to camp.

Traffic was still moving at a reasonable rate, so I didn’t expect trouble as there was no way an event could be held in the area I wanted to camp, as it was too mountainous to park all the vehicles that were headed down the road.

Arriving within miles of the area I wanted to camp, I thought it wise (with all the traffic) to drop the travel trailer off the side of the road while my wife and I checked out each of the campsites I had documented in advance via Google Earth.

The road to the primary campsite I had selected was a bit rough, so we went to check out the second, which was perfect! It had a good gravel road to it, it was on a ridge with a view to the east for watching the eclipse along with a nice breeze blowing over the top, would easily hold two RVs (level sites) and was close to the activities we wanted to enjoy while waiting for the eclipse. It even had a bit of cell service which we didn’t have while driving up to the area.

Fearing someone else might come along and steal our site, I left my wife with a camp chair, bottle of water, bag of trail mix, puzzle book for entertainment, and headed back to get our travel trailer. There was still traffic coming up the road while I headed down to get the trailer, but there were gaps between groupings of vehicles and it was still moving near speed limit.

Arriving back at the trailer I quickly hooked on and headed back to the campsite my wife was holding, maintaining the speed limit for the first few miles until I came around a corner just a little over a mile from the side road to our campsite and came to a complete stop. In front of me was a line of vehicles that were stopped, shut off, and the occupants were exiting their vehicles.

I shut down as well thinking there was a stalled vehicle ahead and traffic would start moving again soon. After ten minutes, I went back to the trailer for a break and something to eat, after 45 minutes I figured my wife was wondering what was going on. Checking my cell phone, it showed “no service.”

After an hour, I began to look at what few options I had for rescuing my wife. I could: A) Wait for law enforcement to possibly drive by to see if they would escort me and our RV in the empty oncoming lane or have them go get her. B) Abandon my vehicle in the road and walk to her. C) Somehow get my truck and trailer off the road, unload my motorcycle from the back of my truck and ride up the road, dodging any oncoming vehicles, and get her. 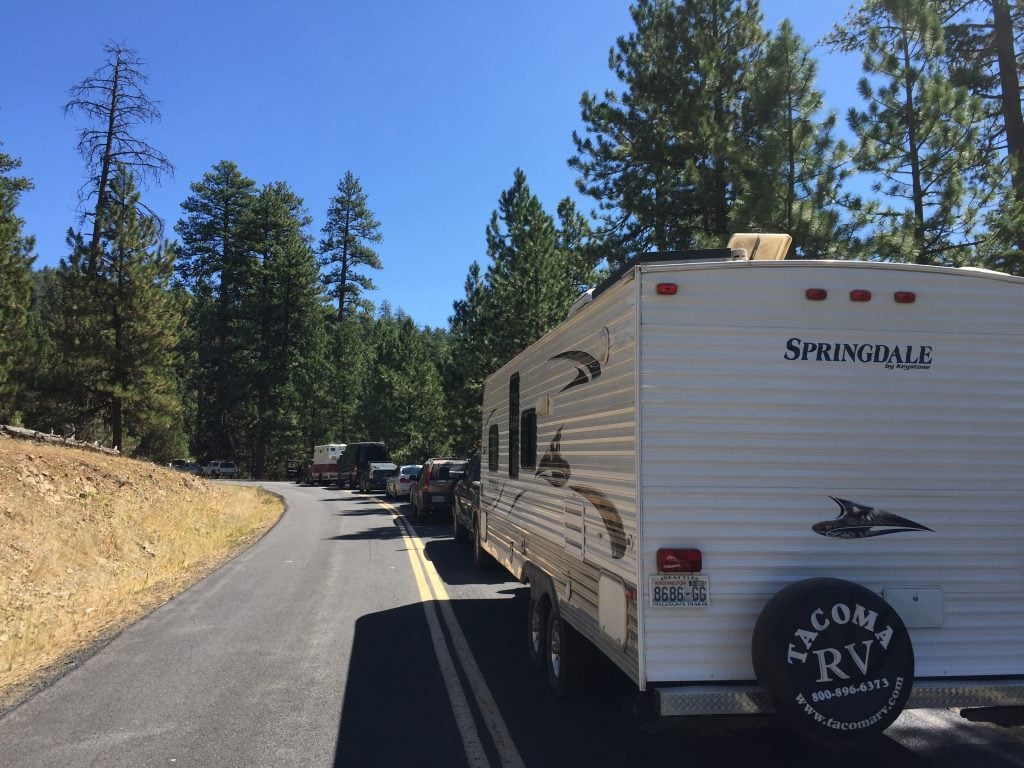 No way to turn around to escape the traffic

From my research and the marked-up paper map beside me, I knew there was a side road just a couple hundred yards up the road that I could most likely tow the trailer up with a campsite (aka turn around) at the top.

After walking the two hundred yards up the road, and a short conversation with a fellow RVer, he agreed to hold the downhill traffic while I drove the RV up the oncoming lanes to the side road.

Arriving at the top of the side road, I unhitched the trailer and was about to unload my motorcycle, as traffic started to move unabated up the hill again.

Abandoning the idea of unloading the motorcycle, I quickly hooked back onto the trailer, left the side road, and started up the hill towards my wife. Rounding the first bend, I discovered traffic had totally stopped again!

Now, approximately two hours after leaving my wife, I had to take action. Luckily my new parking spot on Road 42 had a wide enough and long enough shoulder to park on. After conferring with fellow road warriors, they watched as I backed off the road.

Quickly I had the travel trailer securely chocked on the side of the road, the truck unhooked, and this time the motorcycle unloaded. Minutes later I arrived at the campsite to rescue my wife returning her to the trailer, leaving the camp chair behind to hold our space.

While there is much more to this story, the bottom line is we finally got the truck, trailer, motorcycle, and ourselves to the campsite, five hours after “reserving it.” If we ever cross paths while RVing, pull up a camp chair, throw an extra log on the fire, and I will tell you about the rest of our adventure.

And yes, our friends finally arrived late Thursday, spending much more time in traffic (one hour just to make a left turn at an intersection) than my wife and I did. Their experience is a whole other blog entry!

Being stuck for hours on a narrow two-lane forest service road, with no hope of turning around, and separated from my wife with no form of communication…just another adventure in RVing!