You are here: Home / Top Stories / #Campout2016 Protects Wildlife (and People Too!)
This post may contain affiliate links or mention our own products, please check out our disclosure policy here.

This summer record numbers of people are playing in America’s outdoor recreation areas. To help new and experienced campers form a deeper desire to protect wildlife and wild places, the Great American Campout (also known as “#campout2016”) is happening from now until Labor Day on September 7. 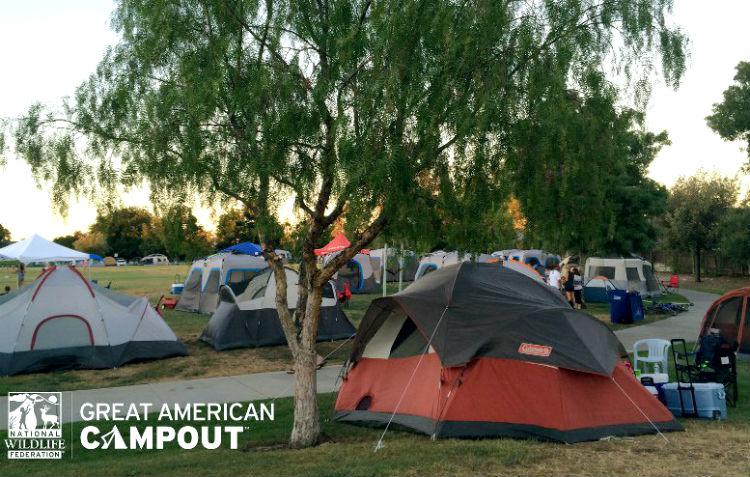 For decades the non-profit group has encouraged outdoor recreation in order to get kids and adults outside and into nature. Photo courtesy of National Wildlife Federation

The Great American Campout is a program of the National Wildlife Federation (NWF), one of America’s largest and oldest conservation advocacy organizations. For decades the non-profit group has encouraged outdoor recreation in order to get kids and adults outside and into nature. NWF works in communities across the country with more than 4 million members and partners like the Disney Worldwide Conservation Fund to protect wildlife and reconnect people with nature.

“The body, mind, and spirit benefits from outdoor play are well-documented and numerous and create a lasting connection to nature and wildlife that will help you have a happier, healthier family.” — National Wildlife Federation

The National Wildlife Federation is asking people of all ages to make an online pledge to camp anywhere at least once this summer. Whether it’s in a tent or RV, in a backyard or national forest, the campaign is to encourage people to spend time learning about the outdoors.

The NWF is also encouraging pledge takers to use social media and help this message go viral.

From “#campies” snapshots of outdoor fun, to promoting public campout events around the U.S., the Great American Campout is the groups biggest annual opportunity to help people practice common sense in the outdoors.

#Campout2016 activities include entering for a chance to win a “Camper Starter Pack” and photo sharing of camping trips on the NWF’s social media sites (use the hashtag #campie and #campout2016). Ultimately the group hopes that campers’ experiences will encourage more people to participate in outdoor recreation the rest of the year.

The 10-year old NWF campaign is more applicable than ever. This year alone, the numbers of preventable tourist accidents and deaths at popular destinations like Yellowstone National Park are on the rise. A short list of mishaps and tragedies for both wildlife and humans includes:

“Approaching wild animals can drastically affect their well-being and, in this case, their survival,” say National Park Service representatives in a recent press release. “The safety of these animals, as well as human safety, depends on everyone using good judgment and following these simple rules.” Those rules include:

As more people discover the magic of camping and the outdoors, shocking human and wildlife encounters are inevitable. But by gearing the Great American Campout toward families with kids, the NWF is working to ensure that the next generation of campers puts a stop to those headlines.

“We have a national responsibility to get our children outdoors, for their health, their intellectual enrichment, their daily happiness, and to instill a conservation ethic in future generations,” the NWF writes on their website.

For more great tips about how to protect yourself and wildlife, see RV Life’s recent article “Six Ways RVers Can Avoid Animal Attacks.