You are here: Home / Top Stories / Canadian Snowbirds Brace For Cold Winter Season
This post may contain affiliate links or mention our own products, please check out our disclosure policy here. 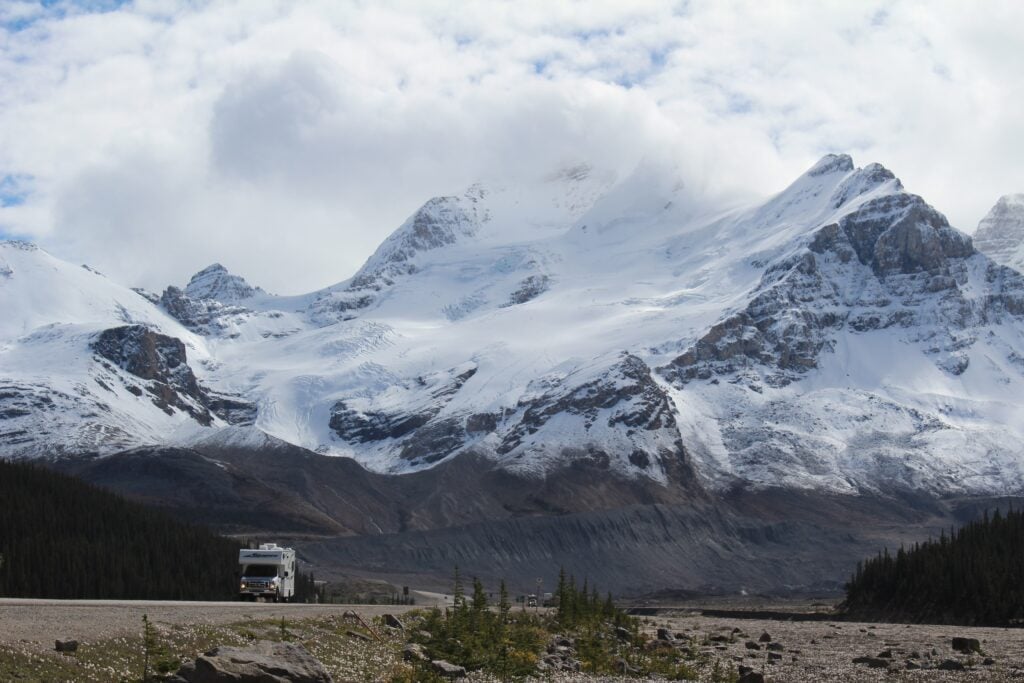 Meanwhile, Canada and the U.S. are preventing all non-essential vehicle traffic from crossing between the two nations. To the disappointment of Canadian snowbirds, RVing south for winter is not considered essential.

“Afraid to think about winter, haven’t been here for at least 30 years. Hope there won’t be any snow,” reports Dagmar Lauber of Penticton, British Columbia.

This year, Canadian snowbirds like Lauber who normally take their homes with them are hunkering down for the long season. Most will stay home. But many of Canada’s full-time RVers are flocking to Lauber’s region. It’s located in Canada’s warmest winter province, British Columbia.

Valeria Frech, a northerner who usually winters in Southern California, is prepping for the shift. “We need some warm clothes, haven’t been in winter weather since 1973.”

Frech, along with at least 50,000 other Canadian snowbirds who typically pack up their RV and move south for winter, are bracing for a cold winter season in their home countries.

Where are full-time Canadian snowbirds going this winter?

When surveyed in a Facebook group for Canadian snowbirds who winter at Fountain of Youth in Southern California, those with a permanent stick home appear to be taking the forced change in stride.

“Walter and I will be enjoying a Canadian winter at home on Vancouver Island. We will NOT travel to any country where there is a disregard to advice from medical professionals,” says British Columbia resident Ferne Gurka.

However, residents of easterly colder provinces aren’t as enthusiastic about staying put. “We are staying home in Alberta and going to freeze,” says Carol Anderson. Her Saskatchewan neighbor agrees. “Shopping for winter clothes. Frost here already. No plans for escaping,” reports Cherryl Murphy.

An article in the Toronto Star Newspaper reports that the estimated 50,000-200,000 full-time RVing Canadians are scrambling for winter spots. A huge migration is underway as nomads flock to some British Columbia RV parks and campgrounds that stay open year-round.

According to the Camping and RVing British Columbia Coalition, only about 150 campgrounds in the province offer winter camping. Many of these locations don’t offer full hookups after September 30.

Another article published by the Canadian Camping and RVing Council reports similar conditions. BC campgrounds with full-hookups have little room to spare. Many report that next summer’s reservations are going quickly too.

J.J. Belanger, general manager of Crystal Cove Resort in Tofino, said the 1,000 RV sites between Tofino and Ucluelet are booked solid all summer. Reservations for Crystal Cove’s 70 sites are already 80% booked for next summer. Calls about winter reservations are starting to pour in. He said private campground operators are asking hotels about partnering for a record number of RVers.

“You’ve got a couple of hundred thousand snowbirds in this country, and the only place they are coming is B.C. They won’t be camping in Manitoba in the middle of winter,” said Belanger.

Winter looks bleak for Canadian snowbirds without RV park reservations or a home base. But a winter housing program by the Canadian Camping and RV Council (CCRV) is making sure nobody freezes to death.

Amid concerns about Snowbirds who will be unable to venture South this winter struggling to find adequate accommodations, and with assistance from The Hotel Association of Canada, we have secured discounts from hotel providers that campgrounds can extend to their guests for the colder months when parks are closed. Please share this link with anyone who may be in need of accommodation: https://ccrvc.ca/resources/hotel-access-program-for-canadian-snowbirds/

CCRV officials partnered with several hotel chains. Together they’re giving lower hotel room rates. Canadian nomads without a four-season RV will find it helpful. For more information on the program, visit Hotel Discount Program for Canadian RV Snowbirds. You can also learn more about the new housing program in this Camper Report article.