You are here: Home / Top Stories / RVing Couple Shares Their Experiences & Worst Fears
This post may contain affiliate links or mention our own products, please check out our disclosure policy here.

Marsha Petry and Janet Shown of Buffalo Creek, Colorado are not completely new to RVing, but have recently upgraded and are about to embark on the next chapter of their lives with a new rig.

We have all been there at one time or another, and all had similar struggles with the learning curve, fears, and uncertainties, and what we are needing out of our rig.  Sometimes we find that learning curve more than once!

Marsha and Janet recently agreed to share some of their newbie and not-so-newbie experiences, dreams, and trials that might help others considering taking the RVing plunge. 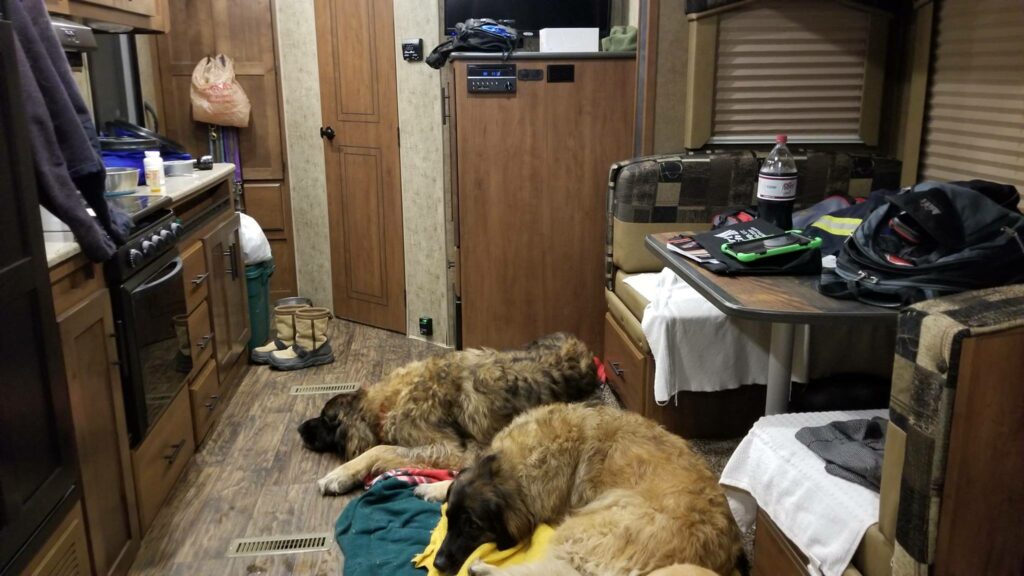 Camping with a family of large dogs can create space issues! (Photo by Janet Shown)

In the beginning, Marsha and Janet decided to get an RV as a way to extend the camping season and to be able to travel with their dogs—large Leonbergers—and gear.

“We both have always loved outdoors activities—backpacking, camping, hiking, skiing and snowshoeing,” Marsha says. “In the early years when we were dating, each of us took our dog(s) and cared for our own dog(s)—it was fairly simple… but then we started to share our backpacking tent, and that tiny tent got pretty cramped with dogs and people.

We got a bigger tent, which in turn lent itself to more car-camping because the tent was too heavy to pack.  When we moved in together we decided to get more dogs! and car-camping with the large tent became the standard mode.”

Soon they were out camping every weekend, which involved loading and unloading the truck roof racks and setting up the large tent to accommodate their five giant dogs, who were more than happy to track in all sorts of dirt into the tent.  Once September rolled around and snow descended on the mountains, camping trips had to stop.  During one winter, they began to think about the benefits of using a trailer instead of tent camping.

Marsha outlined the benefits of a trailer as:

After their first experiences with a trailer, she adds: 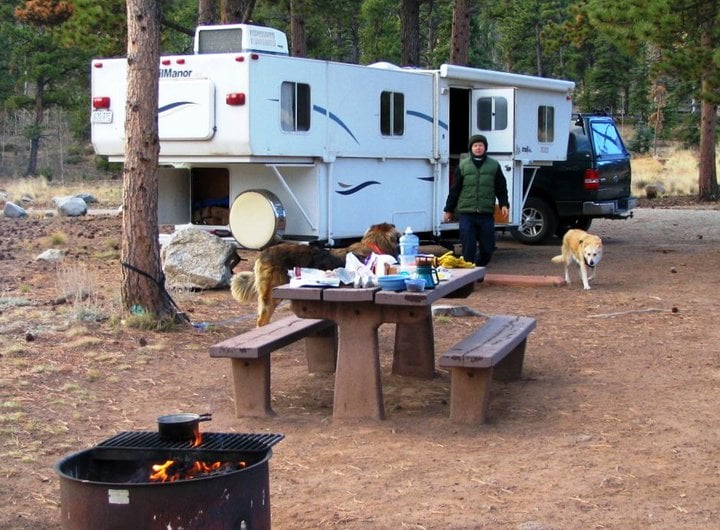 Marsha and Janet camping in their first trailer, the Trail Manor 3023 (Photo by Janet Shown)

They found a lightweight, hard-sided pop-up style Trail Manor 3023 trailer that their Ford Ranger truck could haul.  They took the little trailer across the country between California and Maine, and joined the local Trail Manor club to participate in the club outings.

For many years, they used their trailer from spring through fall.  And then, life happened (as it often does) and between family obligations and building a home, any time they had to go camping got consumed with other tasks.

Eventually, Marsha and Janet were able to think about the possibility of retirement ahead.  They were able to reflect on how their lives had changed and came to realize how much they missed their camping trips.  They had given away the first trailer and started looking for a rig that they could use year-round as much as possible.

In the fall of 2018, they found a trailer they wanted, an Outdoors RV Timber Ridge 21FQS, and a Ford F250 tow vehicle.  Marsha and Janet’s “Must Have” features that made this the rig for their next chapter of adventure including a slide-out (must have more room for dogs), heated water storage and insulating for 4-season camping, room to walk on both sides of the bed to avoid crawling over one another and for ease of making the bed, power next to the bed, a large sink/prep area and counter, lots of windows in the sitting area, and a toilet far from the sleeping area. 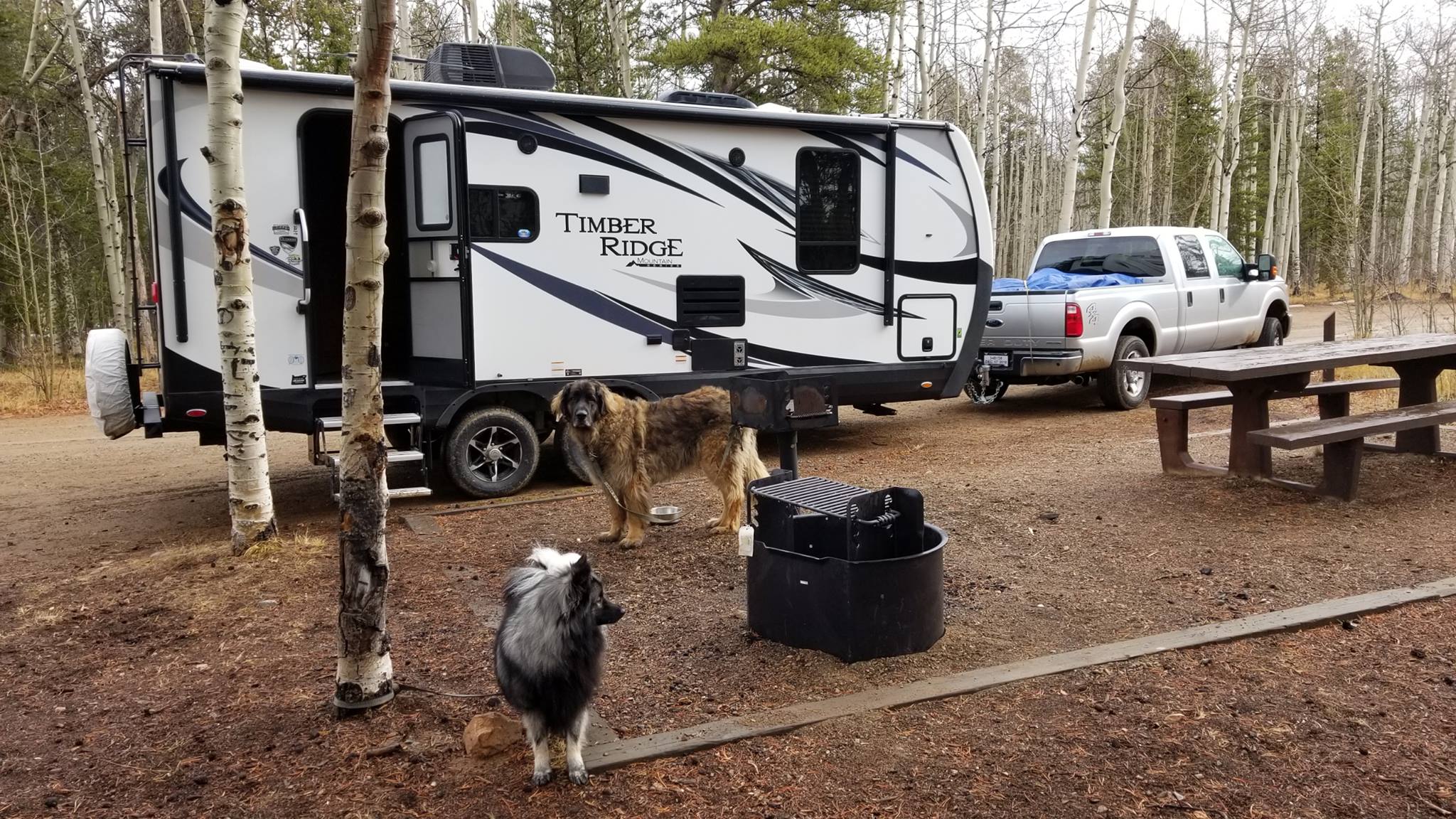 They also considered some of the “Nice to Have” list items like a microwave, solid surface sink/counter, a toilet that uses main water (not a separate water storage), a cabinet by the back door to hold leashes, wet clothing, gear, and an extra large propane tank.

Marsha and Janet are now looking ahead to traveling with their new rig.  They plan on taking a 3-month trip to Canada as one of their first adventures and spending quality time together with their dogs while traveling around the country catching up with friends they haven’t seen in years.

They would love to try to do extended boondocking with added solar to maybe go for a few weeks or months off-grid.  They have a condo in Arizona and are hoping to snowbird south for the winter months while spending summers camping and possibly campground hosting.  Full-time RVing is a definite maybe—Janet would be eager to try, but Marsha is more reserved about that prospect at the moment.

When asked about the concerns or “unknowns” for planning their RV trips, they shared several that are food for thought.

In addition, Janet fears not having the technical knowledge and RV handling ability to run things if Marsha is hurt or there is an emergency.  Marsha does most of the techie stuff and driving and Janet knows she needs to be comfortable doing those things but currently is not.

Marsha’s biggest fear is the increasing lack of remote boondocking locations that they enjoy exploring.

“We were always able to find out of the way places for backpacking and tent-camping but more people are now full time RVing, working/living out of cars, and even full-time boondocking.  Twenty or thirty years ago it was rare to see people living in their cars and, when someone did, it was usually a rare, dire circumstance; nowadays, it’s a “thing” to RV full time or live & work out of a car.