You are here: Home / Top Stories / Endless Fun in Baja
This post may contain affiliate links or mention our own products, please check out our disclosure policy here.

Baja California is so different from mainland Mexico that we often refer to Baja as Mexico Lite. Like Alaska in the U.S. or the northern territories in Canada, Baja has always been Mexico’s frontier. The two Baja territories were the last to be proclaimed as Mexican states—Baja California in the north in 1953 and Baja California Sur in the south in 1974.

With the Pacific Ocean on the west and the Sea of Cortez on the east, the Baja Peninsula has twice as much coastline as the state of California. Mexican Federal Highway No. 1 runs 1,061 miles from the U.S. border to the peninsula’s tip at Cabo San Lucas, and since the highway opened in 1973, RVers have made this magnificent peninsula a snowbird destination, staying on beaches, in the desert, and at RV parks and campgrounds.

There are differences between traveling in Baja and the rest of Mexico. Ultra-low sulfur diesel (ULSD) fuel, mandated in the U.S. for diesel vehicles, is available across Baja but not on the mainland. Unlike the rest of Mexico, Baja does not require vehicle owners to obtain vehicle import permits but only requires tourist permits. On the mainland of Mexico, there is an extensive network of toll highways and Libre (free) roads, providing an expensive but fast travel option. Other than a relatively short highway from Mexicali to Tijuana (Hwy. 2) and from Tijuana to Ensenada (Hwy. 1), there are no toll roads on Baja.  Fortunately very little of the original narrow Baja highway exists; in fact you can now drive from San Jose del Cabo through Cabo San Lucas, Todos Santos and onto La Paz on four lanes with decent shoulders!

Since 2002, we have driven the length of the peninsula round-trip 21 times, and as operators of caravan tours, we have developed favorite places to visit. Here are five of our favorites:

The Valley of Guadalupe
Just a short drive across the Mexican border at Tecate, take Hwy. 3 and before you know it you are in the wonderful Valle de Guadalupe. This is Baja’s premiere wine country, with a Mediterranean climate that is ideal for growing grapes. Few microclimates in the world can claim such desirable characteristics of elevation, soil, seasonal change and temperature.  It may surprise you to know that the grapes of Napa Valley owe much to the vineyards of the Valle de Guadalupe, since much of their original stock originated there.

No visit to Baja is complete without a stop in Guerrero Negro, Spanish for Black Warrior and known as one of the best places to view the gray whales in Scammon’s Lagoon. Guerrero Negro is just south of the 28th parallel, which separates the northern state of Baja from Baja Sur. At $50 per person the whale watching tour here is absolutely extraordinary and unique, as mothers often push the calves right up to the boat and you can touch them!  For young and old alike, this is an experience that rivals any  “Wonder of the World.”

About 1,500 gray whales are born in Baja lagoons each year, and more than half of those are born in Scammon’s Lagoon.

The first of the gray whales migrating south from Alaska begin to arrive at the calving lagoons of Baja in late December to early January. Most have arrived by mid-February to mid-March, and by then, the lagoons are filled to capacity with nursing, calving and mating gray whales. Many people on our tours have actually touched the whales—simply a thrilling encounter.

There are three camping options—two RV parks and one seaside campground.  About 30 minutes from town is the Ojo de Liebre Lagoon Campground.  It is only accessible during whale watching season (mid-December through mid-April) and is inexpensive and very tranquil. You camp around the edge of the lagoon and can listen to the whales at night. Tours are also available.  We have never visited this campground as the drive out has been reported as rough to hideous. RVers who have made this journey talk about the shake and rattle as they roll along (not enjoyable in a motorhome).

The RV park options are Malarrimo and Mario’s. We stay at both on tour. Malarrimo (named after the famous Baja Beach) is in town and has working showers, an excellent gift shop, a good restaurant, a convenience store and the best whale watching tours on Baja.  Mario’s, located just north of town, is less expensive and also has a restaurant and hosts whale watching tours. 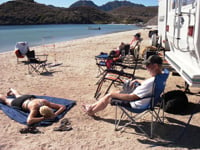 Bahia Concepcion, just south of Mulege, is a popular RV destination for many snowbirds, with 12 beach campgrounds.  The Bay of Conception is 23 miles long and the largest bay on Baja.  The waters off most of its beaches are so warm, calm and shallow that even the most timid landlubbers enjoy swimming, kayaking, paddle boarding and generally frolicking in the water.

The experience of camping on a beach in the Bay of Conception grows on RVers so much that many spend the entire winter.  Hiking and ATVing are popular, and the region has more than 350 cave painting sites, more than anywhere else in North America. We stay at Playa Santispac, which has a couple of decent restaurants, with many gringo regulars showing up Saturday nights at Lupe’s. Many Mexican families work the beaches, some collect camping fees, others sell baked goods, fruit, vegetables and fresh seafood.  Mulege vendors arrive daily to sell hats, hammocks, clothing, blankets, carvings, pottery and jewelery  (What colour? How many? Almost free!)  All supplies are available in Mulege, including propane, gas, diesel, ice and water. It has Wi-Fi, good restaurants and all the groceries you will ever need.

Los Cabos
San Jose del Cabo, Cabo San Lucas and everything in between make up what is known as Los Cabos, the most southern tip of the Baja peninsula.  This is probably the most popular snowbird destination on Baja.  At a latitude of 22 degrees north, Los Cabos is farther south than Havana, Cuba, and during the winter is rarely below 55 degrees at night or above 80 degrees in the day, with no rain and only tropical breezes.

In the span of a few short years, Los Cabos has become one of North America’s hottest golf destinations.  It has almost two dozen courses, including the Tom Weiskopf designed 18-hole Desert Course at Cabo del Sol and the 27 holes of golf designed by the great Jack Nicklaus at The Palmilla Resort.

We enjoy swimming and snorkeling at our three favorite beaches, Playa Las Viudas, Bahia Santa Maria and Bahia Chileno, on the corridor between Cabo and San Jose.  Less than an hour north and you’re in Los Cerritos and Pescadero, where you can enjoy some terrific boogie boarding and surfing.  If you’re into art, San Jose and Todos Santos are where you want to be, with great art districts and many activities that are sure to be of interest. Whether it is a walk around the Cabo inner harbor and the 150,000-square-foot Puerto Paraiso Shopping Mall, a visit to Walmart or Costco, or watching the cruise ships and tourists go by, you will not get bored.

Los Cabos has too many restaurants to count, ranging from Mona Lisa, our favorite stop at the high end, to the affordable and fun Latitude 22, home of No Bad Days.  Unfortunately there is only one RV park left to stay at in Los Cabos, Villa Serena, across from Home Depot.

La Paz
La Paz means The Peace in Spanish and it is the capital of Baja California Sur.
La Paz holds several annual events including Carnaval, the six days before Ash Wednesday; Fiesta de La Paz on May 3, and a parade for Dia de La Revolución (Mexico Revolution Day) on November 20. It is also the finish line for the Baja 1000 off-road race every other year. We have attended Carnaval and the Dia de la Revolución parade, and you should not miss these if you have the opportunity to attend.

There is a great public beach less than an hour away called Tecolote. Many RVers spend the winter here; fishing is a big attraction.  The communities of La Ventana and Los Barilles are popular with wind surfers and kite boarders. La Paz has a wonderful malecon (boardwalk) and is as close as you can get in Baja to the feel of a large Mexican mainland city. We stay at Campestre Maranatha, just north of La Paz in the community of El Centenario.  This is a great RV park, which doubles as a bible camp operated by our friends Jose and Lucinda (Cindy) Nunez.

Dan and Lisa Goy have operated Baja Amigos RV Caravan Tours since 2009 and took their first RV trip to Baja and mainland Mexico in 1985. They present Baja RV workshops and seminars at trade shows and RV rallies.