You are here: Home / Great RVing Destinations / Fishing On The Trask River Didn’t Go As Planned
This post may contain affiliate links or mention our own products, please check out our disclosure policy here.

by Peggy Dent
June 19, 2020February 25, 2022Filed under:
Table of Contents show
Fishing the Trask River
Intruders
Embarrassment on the Trask
Officially the world’s worst fisherman
Fishing as a Spectator Sport
Read more of our fishing stories:

As I’ve mentioned previously, I didn’t like to fish in crowds.  Even if it meant fishing in less desirable locations, I was willing to make the sacrifice to get away from others. I preferred the isolation because I didn’t feel like other fishermen took me seriously, and that magnified my lack of confidence.

If you’ve read Part 1, Part 2, and Part 3 of this four-part series, you probably realize my ineptitude wasn’t just a feeling, but a reality. 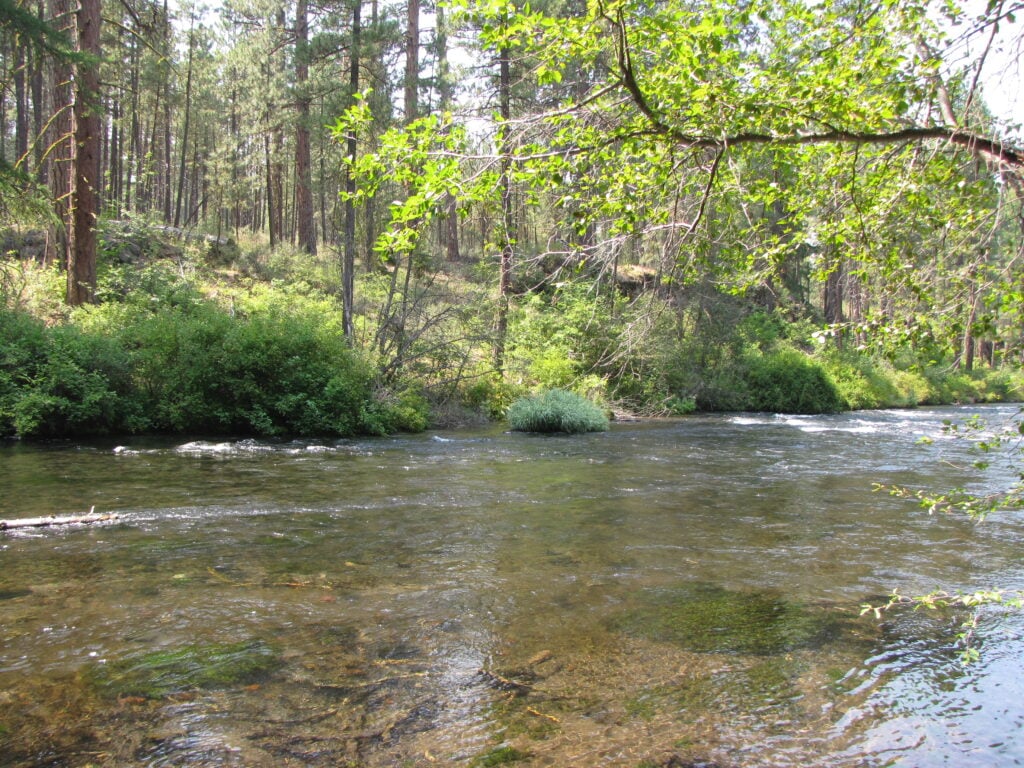 Fishing on the Trask River. Photo by Peggy Dent

One morning I was fortunate to find a prime fishing hole on the Trask River in Oregon devoid of any other fishermen. I was so excited because it was the perfect drift for a left-handed fisherman, and my “gold (fish) fever” had me believing I would probably catch a fish in this fishing hole.

I scurried down the embankment, got set up, and started fishing. The river was perfect. It was the perfect depth, perfect speed, and perfect color.  I knew the next thing was the right presentation, and I was using the most popular set-up for the Trask so I had confidence in it.

Next, I had to adjust the weight on my line to match the speed of the current. After trying a couple of different weights and testing the “bounce” I had my presentation and set-up perfected.  Now all that was needed was patience.

Then I heard it.  The dreaded car doors clicking shut on a car (probably a pick-up) on the road above me.  I didn’t need to turn around. I knew the routine.

Fishermen stop at all the fishing holes, get out of their cars to scope out the fishing hole, and see who’s fishing it.  They may just watch for a while then move on, or not… There are no rules on the river, just some basic courtesies and those are loosely observed or ignored based on perception and respect.

As soon as I heard the car doors, I tensed up.  This fishing hole was perfect for one fisherman, more would be a crowd.  I continued to try and fish normally, knowing that I was being watched and evaluated.

I wanted to demonstrate that I was in complete control of that section of the river and that there wasn’t room for more than one fishing line in this hole.  I could hear them talking while they watched and then it happened.  I shot myself in the foot. 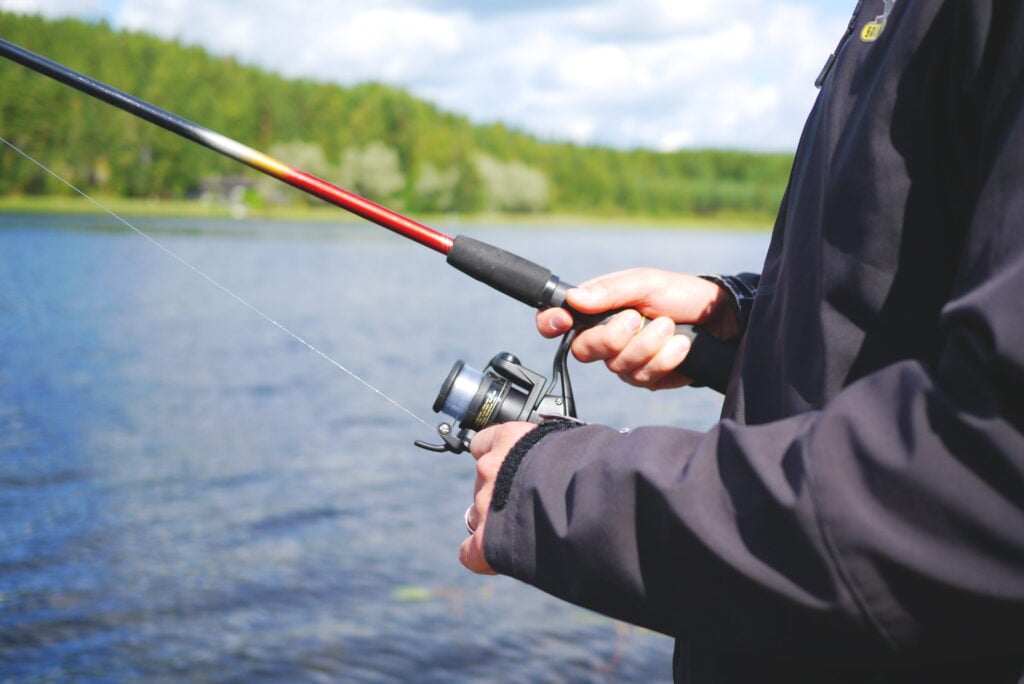 Fishing on the Trask River didn’t go as planned

Embarrassment on the Trask

In an effort to demonstrate that I was fishing the entire hole from top to bottom, I overcast my line upstream to reach the very top of the inflow into the drift, and I inadvertently cast my line right into an overhanging tree branch.

There it was, my perfect set-up with the bright red yarn, dangling drop sinker, fishhook and roe, tangled hopelessly in the overhanging branch, and in that moment, I heard the fishermen above me grunt (or was it a laugh) and then their car doors open and reclosed and I knew what was coming.

The next few minutes tells the whole story. While I jerked and tugged on my entangled line and tried to retain some semblance of dignity, these two guys happily scrambled down the embankment with rods and tackle boxes in hand.

I quickly packed up my gear in embarrassment and grudgingly gave up my perfect fishing hole.  My embarrassment was complete. At that moment, if there was any doubt about my fishing ability, all you had to do was look up, where you could see my gear dangling from a branch with about 20-feet of line drifting in the wind above the river.

The four posts in this series record only a few of the many unsuccessful fishing experiences that haunt my memories and have led to my claim of the worst fisherman title. It’s uncanny, all my memories had the same outcome. No fish, just frustration.  But I didn’t give up easily.  Every spring I could feel the gold (fish) fever stirring in my mind.

Everyone I knew fished and they had stories and pictures and even real fish to show for their efforts. They fished in Hood Lake, East Lake, Crane Prairie, Detroit Lake, in the Columbia River, or in some obscure pond on the backside of nowhere, and I would try to follow them, paying close attention to their copious directions to these obscure places, and their even more detailed descriptions of their set-ups and techniques, but always with the same results. Nothing, no bites, no action, and no fish, just more lost gear. 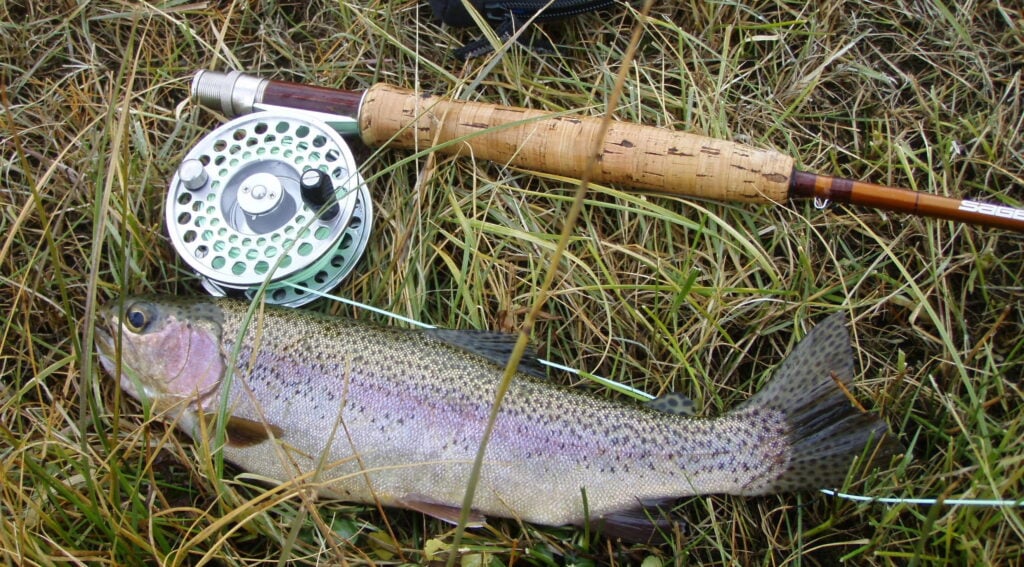 Fishing as a Spectator Sport

I even thought of fishing as a spectator sport. I’d go to Bonneville Damn on the Columbia River and watch people fish for sturgeon.  That was the only specialized rod and reel I didn’t own and the only license I didn’t purchase.

After years of this frustration, even when I had my gear with me and all the appropriate licenses, I slowly began to notice that I just didn’t have the heart for the disappointment any longer.  I started finding excuses not to fish on these trips. “It’s getting late”, “I don’t have the right bait”, “I think it’s going to rain”, “Is that my mom calling?”

Any excuse would do, and it was then that I realized the fish had won. I had finally achieved the dubious honor of being the World’s Worst Fisherman and this achievement came after a lifetime of fun memories, time spent in beautiful places, and unforgettable adventures. The title wasn’t something I could stuff and put on the wall, but it wasn’t a waste of time or a disappointment either.

At least now, the rivers, lakes, and steams will not be polluted with any more of my fishing tackle.

Read more of our fishing stories: