You are here: Home / Blog / Golfing on the moon, 45 years ago today
This post may contain affiliate links or mention our own products, please check out our disclosure policy here. 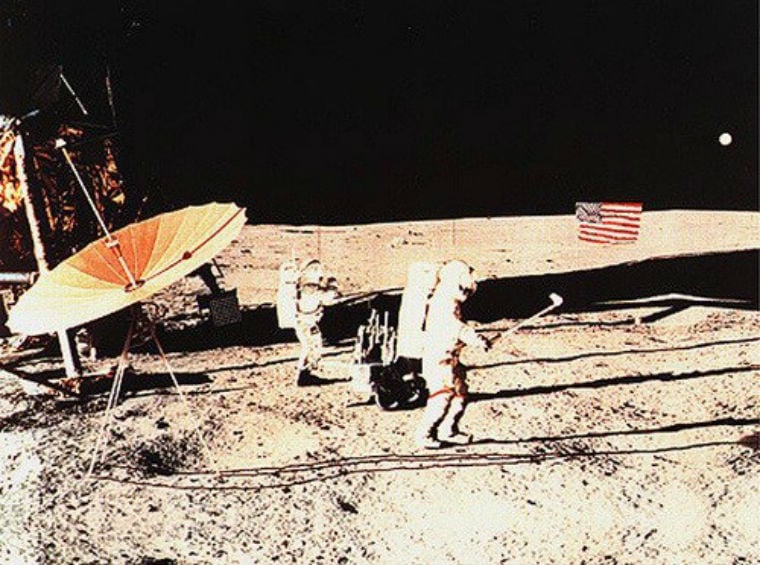 Scientists “guesstimate” that astronaut Alan Shepard‘s ball traveled more than 900 yards. On earth, it would have made it to roughly 200 yards.

Though some golf courses seem like they are out of this world, there is only one golfer who can legitimately claim to have golfed on another planet. It was 45 years ago today, on Feb. 6, 1971, when astronaut Alan Shepard teed up and hit a golf ball on the moon. With the moon’s gravity pull only a sixth of that of the earth, scientists “guesstimate” that the ball traveled more than 900 yards. On earth, it would have made it to roughly 200 yards. Some speculate that even today, that golf ball is still in space. The club Shepard used, however, made it home, and is on display at the United States Golf Association Museum in Far Hill, NJ

Using a makeshift six iron, Shepard hit two golf balls on the lunar surface, becoming the first and only golfer to do so. While commander of Apollo 14, Shepard was one of only 12 men to walk on the surface of the moon.

The seed for golfing on the moon was planted when Shepard was giving comedian Bob Hope a tour of NASA back in the 1960s. According to USGA museum officials, while in the low-gravity simulator, Hope started taking his trademark golf swing. Fast forward to Shepard’s trip to the moon a decade later, and the astronaut knew he wanted to do something special while on the moon, thus was born the idea of bringing along a golf club and a few golf balls on the Apollo 14 mission.

Though a regular golf club was too large to carry aboard the space ship, Shepard got some help from a Houston-area golf pro. According to the Smithsonian National Air and Space Museum, Jack Harden, a pro at the River Oaks Country Club, attached the head of a Wilson Staff six iron to an instrument used for rock collecting.

When it became show time for Shepard on the moon, he casually dropped two balls on the lunar surface. He immediately shanked the first ball, and used the excuse that his suit was too bulky – at least his excuse was original. The second ball was a perfect shot.

Ironically, the astronaut never revealed the brand name of those two golf balls. Manufacturers and their marketing teams would have paid dearly to discover that fact. After retiring from the space program, Shepard lived in a home overlooking Cypress Point in Pebble Beach, CA., passing away peacefully in 1998, taking with him that long-kept secret of the golf ball manufacturer.