You are here: Home / Blog / This Seaside Village Is A Central California Gem
This post may contain affiliate links or mention our own products, please check out our disclosure policy here.

About 25 miles south of San Francisco is the picturesque seaside village of Half Moon Bay. While visiting this area with endless beaches and photo opportunities, you’ll hear the term “Coastside” used frequently. It refers to the San Mateo County Coastside, which is made up of more than 300 square miles of breathtaking California countryside. 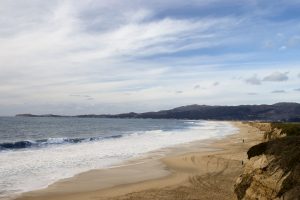 Half Moon Bay. Photo via Wikipedia

Set in the heart of the Coastside is Pelican Point RV Park, which is a short walk to the Pacific Ocean in one direction and the town of Half Moon Bay in the other. 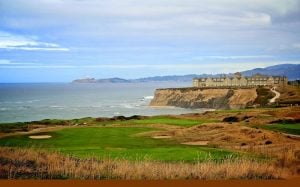 The Coastal Trail begins right outside the park, and is popular for bicycling, walking, or getting to the beach.

For golfers, accessing the nearby Half Moon Bay Golf Links is a must. Though pricey, it is well worth the money to experience golf with a backdrop of incredible scenery.

With 180-degree sweeping ocean views, Half Moon Bay Golf Links features two breathtaking courses: the firm and fast links style of the Ocean Course, and the American traditional parkland style of the Old Course, with its iconic cypress trees and dogleg fairways. 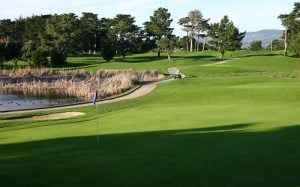 Half Moon Bay Golf Links is also part of the castle-like Ritz-Carlton hotel and spa. Like the golf, they have great food and amenities, but it comes with a price.

You can find more details about Coastside California on VisitHalfMoonBay.org.  To read more about Pelican Point RV Park, see what other RVers said on Campground Reviews.