You are here: Home / Maintenance, Modifications and Repairs / Installing the 360 RV Universal Holding Tank Roof Vent Siphon Cap
This post may contain affiliate links or mention our own products, please check out our disclosure policy here.

One of the most important systems on our recreational vehicles are the holding tanks. Some RVs will have multiple holding tanks and what is placed in the tanks needs to be vented for a number of reasons. If there is any pressure in a tank and a person opened a blade on a toilet, that could be a very unpleasant experience – therefore venting prevents any surprises.

Although most RVs have 2 tanks, the tanks are typically segregated for black and gray water. Although a black water tank in most cases would be judged to be the critical tank, one has to consider that the contents are chemically treated and most often flushed using internal spray nozzles. In reality the black water tanks typically wind up statistically cleaner. 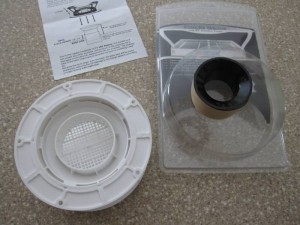 A gray water tank will hold sink, shower, galley and wash water. By in large we would assume that the content of the gray tank is just slightly dirty water but in reality gray water tanks will always present the most pungent of odors. Gray tanks are typically not flushed or treated and accumulate all types of grease and kitchen debris from the galley. The contents therefore can be very gaseous and present a terrible odor. Venting the gray tank is essential.

All RV tanks will typically vent through the roof just like a house. The stacks are normally seen to made from PVC and are typically 1 ½” in diameter. Once the stack sticks through the roof, the OEM takes measures to seal the immediate area where the pipe comes through the roof. A cap is fitted on the end of the pipe and it is expected that it will flow gasses from the tank and vent those above the roof. 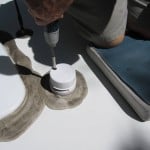 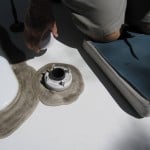 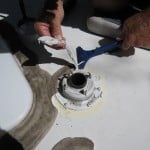 a. Remove 1 screw
b. Pull the cap and set aside
c. Remove existing sealant around base to expose screws.

In reality what many RVs will experience is that OE caps promote a positive pressure in the stack and therefore push out odors inside the coach. Many devices have come to market recently including directional vane feature devices of all types. These devices will almost always have some type of venturi orifice and it is expected that underway the venturi creates a vacuum in the stack and vacates odors. The RV 360 (shark fin) is the original device that was engineered and manufactured which actually accomplished this task. Many others since its introduction were cloned and re-engineered and you can see any number of these at RV Shows.

Not wanting to rest on their laurels, the RV 360 Products Company again revisited the problem with the stack and actually replicated flow events on powerful computer systems. Observing the pressures on the stack under various conditions both underway and stationary, a condition was observed where the venturi type vane might be improved. 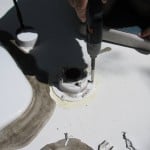 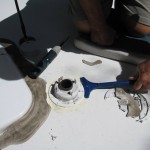 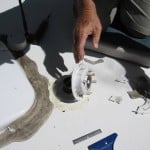 a. Remove screws from existing base
b. Cut the sealant between the roof and the base
c. Remove the existing base

In order to address this deficiency, various computer models were considered in order to provide a 360 solution under all operational conditions with the same results whether the stack is in a dynamic or stationary state. A design was observed where negative pressure in the stack could be achieved, Omni directionally, with no moving parts or venturi. Enter the newly engineered 360 Siphon.

The 360 Siphon is a fixed cap that when installed is engineered so that airflow from any direction or velocity will always create a negative pressure in the stack extracting fumes from the holding tank. Basically it all has to do with a design that is similar to an airfoil and that pressure on one part of the airfoil will be less creating lift. 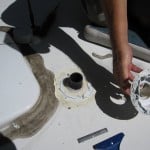 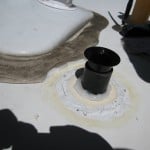 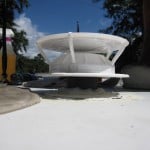 a. Inspect sealant in between stack and roof, discard old base unit
b. The water sealant collar goes onto the vent stack
c. Trial fitting proves the stack must be cut

I wanted to try out a 360 Siphon vent cap so I ordered one from Doug Swarts at Drainmaster. Drainmaster’s only business is RV waste holding tank solutions. This new product compliments their current product line which consists of the Drainmaster 12 volt powered gate valve and the Polychute system. Both these systems have been reviewed by professional RV instructors one such being the respected Gary Bunzer, the RV Doctor.

The 360 Siphon comes in a blister pack and is comprised of 3 pieces. There’s the white cap that we will all see first and then there’s a shaped pipe insert which is called the water sealant collar that is pushed into the end of the pipe. The kit also ships with caulking tape which is used in between the base of the siphon cap and the roof.

Our test vehicle, a 2004 Winnebago Industries Brave, was provided by Beau Endres, who is a part time instructor for RV Driving School. For those of you that came to the National Rally, Beau is the guy that gave us that exceptional fire safety seminar. Beau presents 2 day RV driving course for folks that come to the Myrtle Beach Area in summer and he resumes training in Florida during the winter months. 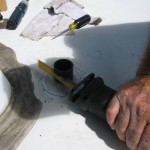 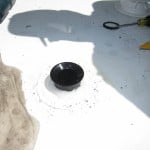 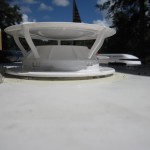 a. Measure twice and cut once. We’re using a battery operated saw-z-all.
b. Install the water sealant collar again
c. Fit the Siphon cap on the collar and check the proximity to the roof (observe about a 1/8″ gap or less)

Disassembling the old cap was fairly easy. A single screw holds the cap into the base of the unit which was removed. The cap was lifted off and set aside. The existing self-leveling caulking was actually beginning to come off since it was easy to reach in using your fingers and to pull off lengthy strips of the stuff. A 4 inch wide razor scraper was used at a shallow angle to completely clear off the remaining caulk around the base. The screws were removed from the old base. Using the scraper again, we cut the seal under the cap and were able to remove and discard the old cap.

We completely cleaned the area using a mild cleaner and dried the area. The sun took care of drying everything out really well today. What we were left with was a piece of the stack that was about 2 inches tall. We left the sealant around the pipe between itself and the roof in tact and did not alter it. 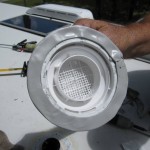 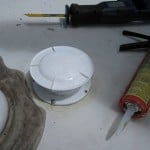 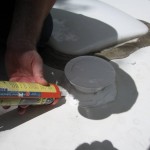 a. Using the provided caulking strip, carefully lay and follow the outside edge of the base
b. Fit the cap on the seal and stack, secure with 5 screws (I used stainless)
c. Lay in a heavy bead of Dicor self leveling sealant and allow it to flow

Measurements are required on the exposed vent stack and the length of pipe that is required for the siphon cap is approximately 1 1/8”. When measuring you always want to measure 3 times and cut once. In our case we measured lots of times but getting the cut right on the first pass left us a little too tall so the cap didn’t sit on the roof. We took a second cut and we were right on.

The caulking tape was applied to the bottom of the cap. The insert was pushed down into the stack as far as it would go. Having previously purchased a small quantity of 1 inch long, #6 stainless screws, the cap was secured to the roof using 5 screws. The screws are angled a bit and using a power driver they tapped themselves through the roofing material in our case, fiberglass. We did not sock these things down on the first pass. Once all the screws were in, we manually tightened the screws just until you could see a tiny amount of caulking tape bulge out from under the cap. 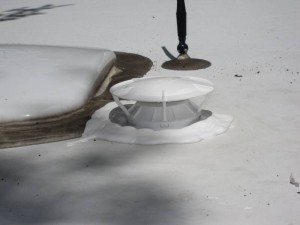 Completed installation of the RV 360 Siphon

Once the cap was in place, the next and final step was to use a tube of Dicor, White, 505-LSW self-leveling sealant. We cut a large hole in the nozzle about 1/4 of the way back. I applied a liberal amount of the caulk on the base and it spread out and did a wonderful job in sealing the base of the siphon. We picked up all the debris, tools and other stuff off the roof and we were out of there. We climbed down and retreated into the air conditioning to enjoy a tall glass of cold water.

The installation took more time in prep work than installing the 360 Siphon itself but once it was all secured it looked just like a nice professional job. On a scale of 1 to 10 in difficulty, I would rate this install a solid 4. Thanks for reading. You can find out more about the 360 Siphon on the Drainmaster Website.

Don’t miss out on seeing the Video proving out the technology.