You are here: Home / Blog / How To Get Rid Of Ants In Your RV
This post may contain affiliate links or mention our own products, please check out our disclosure policy here. 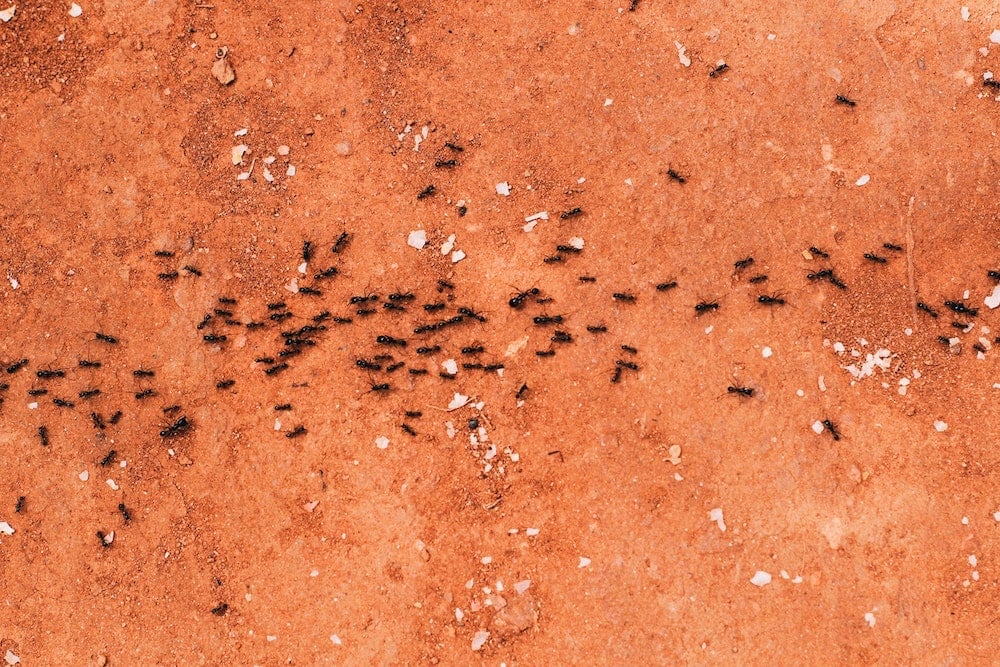 Black ants can be killed with natural products.

If you’ve ever had an infestation of ants in your RV, then you know how disconcerting it can be. We can relate. Our new RV came with ants.

In 2019, we bought a new motorhome from a dealer in Florida, and apparently our RV had been on their lot long enough to become the permanent residence for at least two colonies of ants.

Chemical pesticides are never an option in our home.  We believe these harsh chemicals are dangerous to humans and even more so for our canine companions. We were desperate to find a natural and effective way to kill the ants we could see. And, also all the ants in the colony. We believed they were somewhere between the outer and inner walls of the RV.

After doing some research, we decided to feed the ants a half-and-half mixture of our own design.  The first ingredient was something they would readily eat and take back to the colony to feed their queen and the developing brood, and the second ingredient was identical in texture and composition, but it was there to kill the queen, the brood, and all the forager ants.

The primary ingredient that attracted them was confectioners’ sugar and the ingredient I used to kill them was baking soda.  I have also read that Borax, instead of the baking soda, will do the job nicely.  I did finally source and procure a box of Borax but by then the problem was nearly resolved with the baking soda, and I felt the soda was safer for the dogs, so I never tested the Borax. 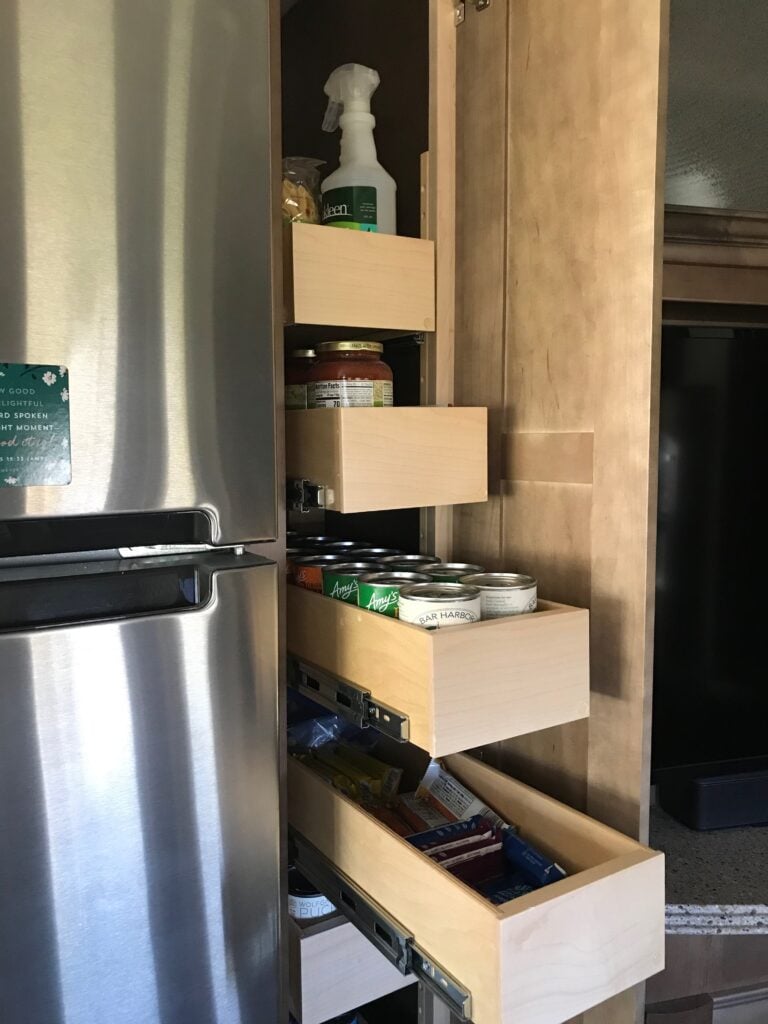 Ants happen. They could be in the pantry, on the countertop or dashboard, or even crawling across the ceiling. Photo by P. Dent

The method I used was to create a flat surface for the bait by folding a piece of tin foil until it was fairly stiff but could still be flattened onto the surface closest to the concentration of the ants.  Then I put 1/8 teaspoon of both ingredients on the tin foil and mixed it thoroughly.

I first tried using a small paper plate instead of the foil, but it was like creating an obstacle course for the ants, which unnecessarily obstructed their efforts to take their prize back to the colony.  I wanted the forager ants to locate the bait, eat some, grab some, and head back to the colony as quickly as possible and creating a flat surface was better than having them crawl up the underside of the paper plate to locate the bait. 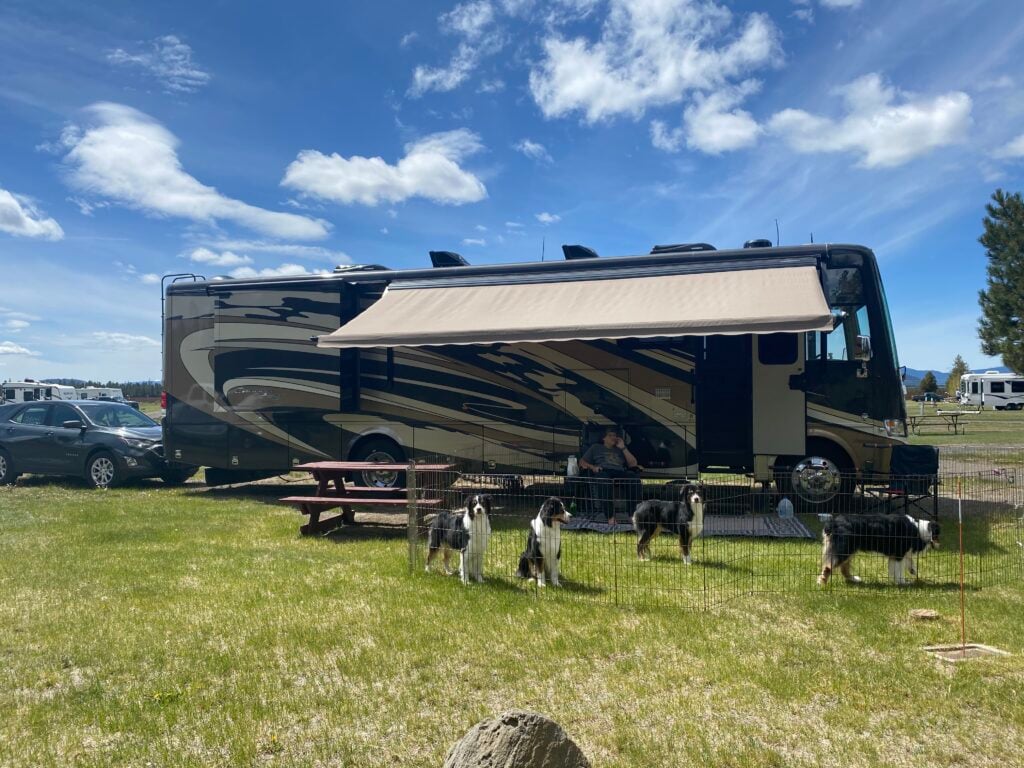 This is why we needed a natural alternative to dangerous pesticides. Photo P Dent

Changing the RV ant bait daily was the solution

This mixture will harden and become less effective in about 24 hours since it absorbs moisture from the air, so the mixture needs to be replaced daily.  I found that the ant activity was more intense on the flat tin foil sheets then on the paper plate and the foil could be easily wadded up and thrown away each day when I refreshed the bait.

My philosophy of why this worked is not very scientific. But I believe that the ants couldn’t tell the difference between a particle of sugar and a particle of soda. After sampling some of the bait (presumably the sugar particles) some ants determined that it was suitable to take back to the colony.

The ants that sampled soda particles first may have continued their search until they eventually sampled sugar particles, and then arrived at the conclusion that the bait was indeed food.  Once the foragers established a path between the bait and the colony, other ants joined in the process of carrying the bait back to the brood and queen.

Fortunately, most of the ant activity was at night.  In the morning I would kill all that were still on the counter and clean the counter with a natural disinfectant spray.  I did my best to keep them under control all day, then put out fresh bait in the evening.  This process took at least a week, but slowly I noticed that there were fewer ants showing up around the RV, and then one day there were none.  Since then, I have not had any ants anywhere in the RV and I am truly thankful for that. 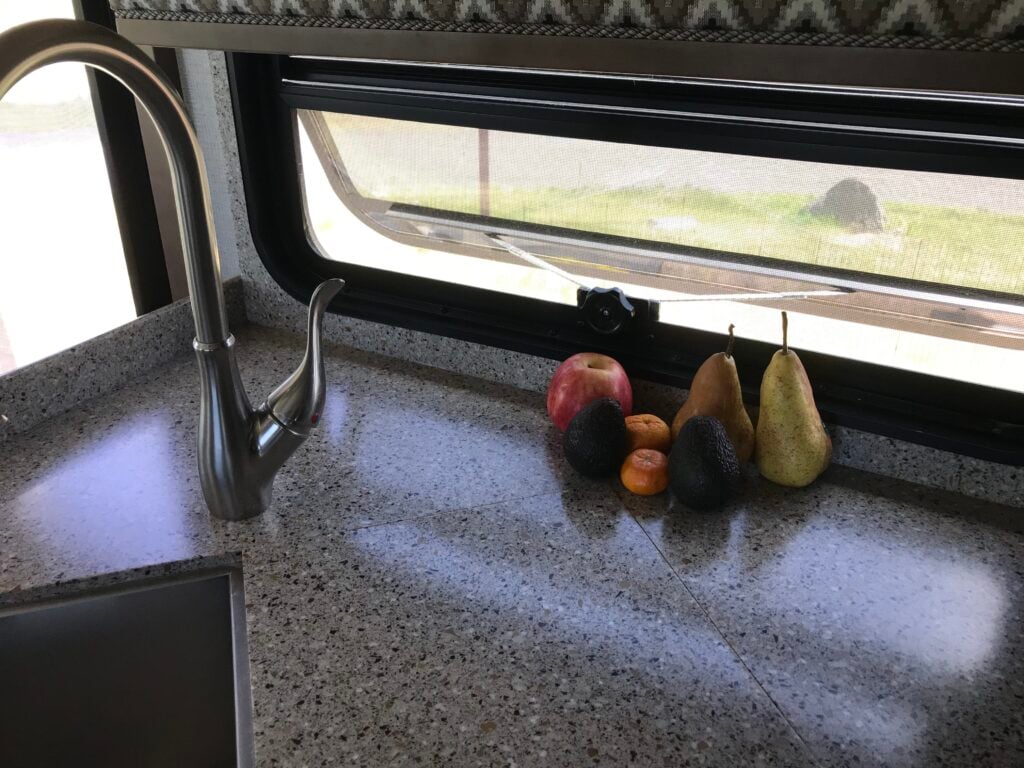 Ants can be on the countertop or in the sink. Photo by Peggy Dent

Other Natural Ways to Get Rid of Ants in Your RV

There are other things you can do to prevent an infestation of ants. I wish the dealership had been more proactive in preventing the infestation in the first place, but they didn’t. Here are more ways to get rid of ants in your RV.

If you’re in an area where ants are prevalent, you can use Diatomaceous Earth around the outside of your RV to prevent them from establishing a new colony in your RV.   This is a natural and completely safe powdery compound that is mined from calcium deposits on the seabed.

Put DE anywhere under and around your RV where ants might gain access.  You can put it on your electrical cord, sewer connection hoses, water line, tires, or anywhere ants might establish a path into your RV.  Ants can gain access from overhanging foliage, so don’t park your RV where tree branches touch your roof, or they can crawl up and under anything that is connected to the ground.

Diatomaceous Earth is such a fine dry powder that it literally clings to the dampness found at the joints of any exoskeleton insects (ants, fleas, ticks) causing the joints to freeze up, much like a motor freezes up if the oil gets too gummy. Because it only works when it’s dry you may need to repeatedly apply DE to exterior surfaces.

If your environment is too wet to use DE, other options include Wondercide flea and tick spray. That’s just cedar oil. Diluted vinegar is also effective as an ant repellant.  Of these three, I think DE is the most effective, but it must be dry to do any good.  Of course, it’s better to prevent an infestation rather than deal with it after the fact, but that’s not always possible.

If you have a problem with ants in your pantry, don’t despair, just use the bait, be persistent, and be patient.