You are here: Home / Blog / New Sights to See on the Olympic Peninsula
This post may contain affiliate links or mention our own products, please check out our disclosure policy here. 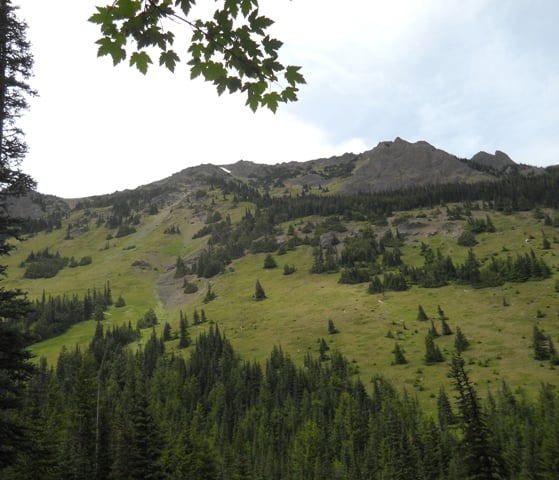 The mountain side near the wreckage of the B-17 bomber that crashed in 1952.

In my last entry my wife and I were stranded on the Olympic Peninsula after enjoying the better part of a week crabbing, clamming and exploring. As promised, I will be sharing some of our experiences in the next couple of blog installments.

A recent study revealed that hiking was the number one activity enjoyed by RVers. With that in mind, let’s take a look at a hike that includes something of interest for every member of the family. The Tubal Cain Mine Trail in Olympic National Park offers a glimpse into the life of hopeful miners of the early 1900s. In fact, it`s  a somber reminder of the sacrifice the members of the military make with gorgeous scenery, creeks to splash in, and the anticipation of finding a geocache or two.

The trail you will be hiking was built by those looking for mineral wealth in the 1890’s. It was built for pack animals carrying heaving loads and therefore is comfortably wide with a minimal grade making it suitable for everyone in the family. 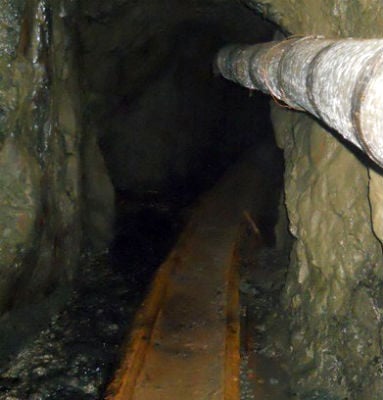 A portion of the Tubal Cain mine.

Mining History: Copper and Manganese were discovered in the area and claims were staked on Iron Mountain in 1901, sending a rush or miners to the north Olympic Mountains with the hopes of quick riches. Like most rushes, the potential wealth of the area was over promoted and the area died a slow death, including the namesake Tubal Cain Mine and others in the area. Those looking to explore the mining past will find the best remains at Tull City and the Tubal Cain.

Military Remembrance: In January 1952, a B-17 was returning to McChord Air Force Base after assisting with a Canadian rescue mission. Flying in blizzard conditions with a crew of eight, the plane clipped a ridge and skidded down a steep snow-covered slope stopping near the deserted mining camp of Tull City. Three of the eight crew members were killed in the crash and the survivors, not knowing the serviceable buildings of Tull City were nearby, built emergency shelters until they were airlifted out the following day.

Scenery: The forested hike to the mine and wreck site is very beautiful by itself, but those wanting a better, up close glimpse of the majestic Olympic Mountains will want to either continue up past the plane wreckage (a short distance to an open cirque) or continue past the Tubal Cain Mine towards Marmot Pass. Once you have soaked in the history and beauty of the area (or if your legs grow tired), simply return the way you came. 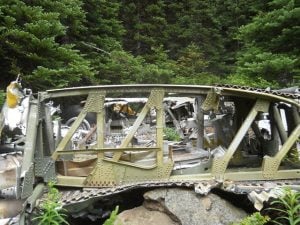 The closest developed campground to the trailhead is: Dungeness Forks Campground operated by the USFS But before you access this campground, due to the steep one lane unpaved road access trailers and motorhomes are not recommended. The closest and most convenient public campground with services is: Sequim Bay State Park. Many private campgrounds are also available in the Sequim area.

Exploring old mining areas, paying respects to those who served and died for our country, and just enjoying the beauty of the Olympic Mountains is just another adventure in RVing!