You are here: Home / Top Stories / You Can Visit Santa Claus’ House In North Pole, Alaska
This post may contain affiliate links or mention our own products, please check out our disclosure policy here.

Yes, there is an actual town called North Pole, Alaska.  It is a small town of about 2,000 people located about 20 minutes drive time from Fairbanks.

It is not the geographic North Pole, in fact, it is about 200 miles south of the arctic circle, but it is known for its year-round Christmas decorations and a 42-foot tall Santa Claus statue.  In fact, Santa Claus (his legal name) sits on the City Council.

One of the highlight attractions of North Pole is, of course, the Santa Claus House.  This is the magical location where you can visit Santa, Mrs. Claus, and the reindeer team.  The magic of Christmas brings out the child in even the smallest Grinch heart. 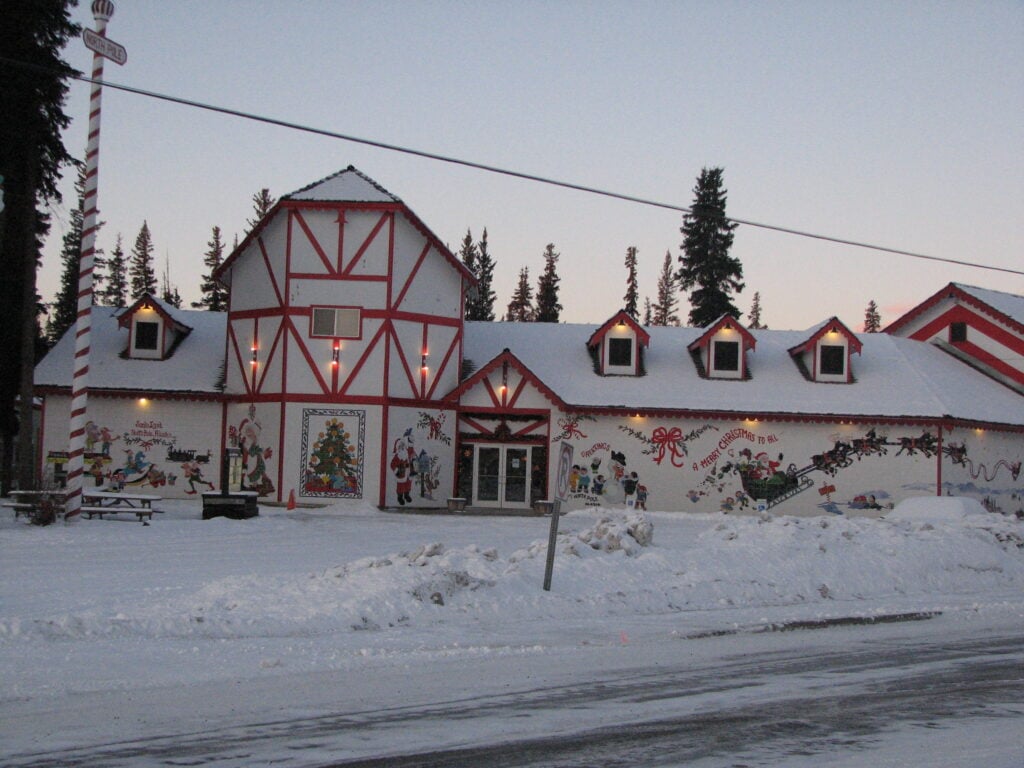 The back story for the Santa Claus House is quite sweet.  The Miller family came to the Fairbanks area in 1949 and established a trading post where goods were traded for furs from the surrounding villages.

Each Christmas, Con Miller would wear an old Santa suit to do his fur trading.  In 1952, the Millers established a general store in the town of North Pole.  One of the local children asked Con if Santa was building a new home, inspiring the general store to be named Santa Claus House.

Since its time as a general store and post office, the Santa Claus House has undergone many transformations, adding additional wings and the Antler Academy where the reindeer go to flight school.  The Miller family (now in its third generation) still owns and operates the Santa Claus House, although it has become a Christmas themed sight-seeing stop and gift shop more than its roots as a trading post.

The Antler Academy is located next door to the Santa Claus House.  This is an up-close way to see Santa’s live reindeer and learn about these fascinating animals.  During the non-flying summer months when the reindeer are not busy with Christmas tasks, you can take a tour to go inside the pens and interact with Santa’s team.

For children young and old, the Santa Claus House will bring a smile to your face and Christmas cheer to your heart any time of the year.