You are here: Home / Blog / Camping Along The Yellowstone River In Montana
This post may contain affiliate links or mention our own products, please check out our disclosure policy here. 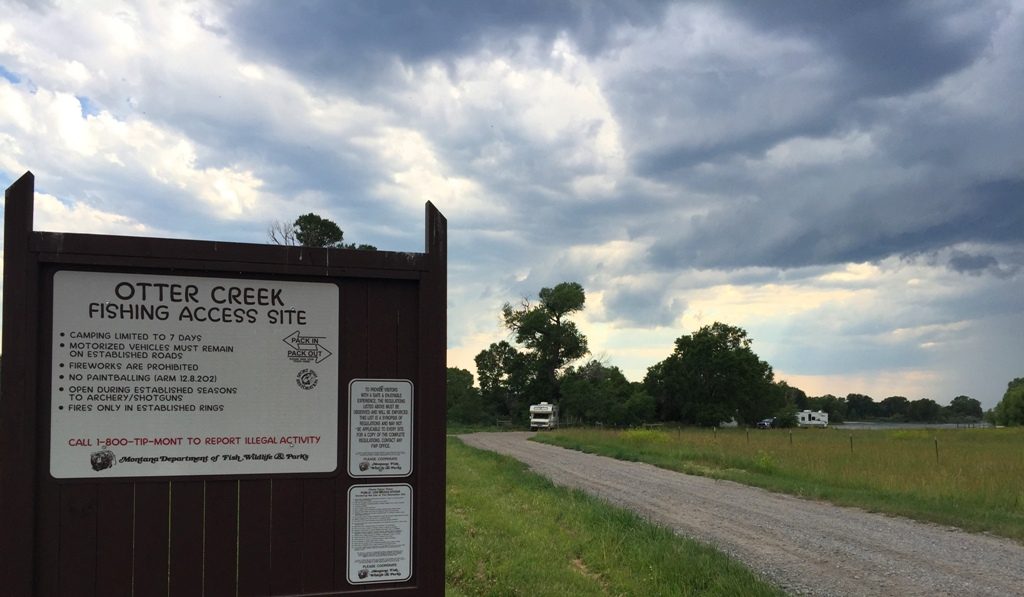 Camping Along The Yellowstone River In Montana

Needing a convenient and free spot to camp for the night while traveling through Montana via I-90, I looked over the list of Fishing Access Sites (FAS) and found Otter Creek FAS near Big Timber not too far off the freeway.

The site is along the banks of the Yellowstone River, just off a paved road, and best of all, overnight dry camping (there are no hookups available) is free!

As we approached on the road above the site, I saw a number of RVs already camped there and as it was close to dinner time, I hoped there was one more site available for us.

As we circled through the area passing by the already occupied sites while searching for open sites, I found it odd that there was a total absence of people in or around the RVs or anywhere for that matter. Despite the heat, there was nobody sitting outside in their lounge chairs under their awnings, in fact, their awnings weren’t even deployed.

Closer inspection revealed the RV windows were closed and the fact there were no generators humming to run the air conditioners, lead me to believe the RV owners weren’t in their RVs either.

Next, I noticed there were no tow vehicles parked in front of the travel trailers and fifth wheels. One RV had a couple of tents set up in front, of which one had been blown down by the wind. It began to feel like one of those sci-fi movies where the main characters drive into a town only to find the residents had mysteriously disappeared!

About that time, I spied an open level shady grassy space on the banks of the river, hunger and fatigue quickly overcame the fear of man-eating creatures lurking in the river, and I quickly pulled in. 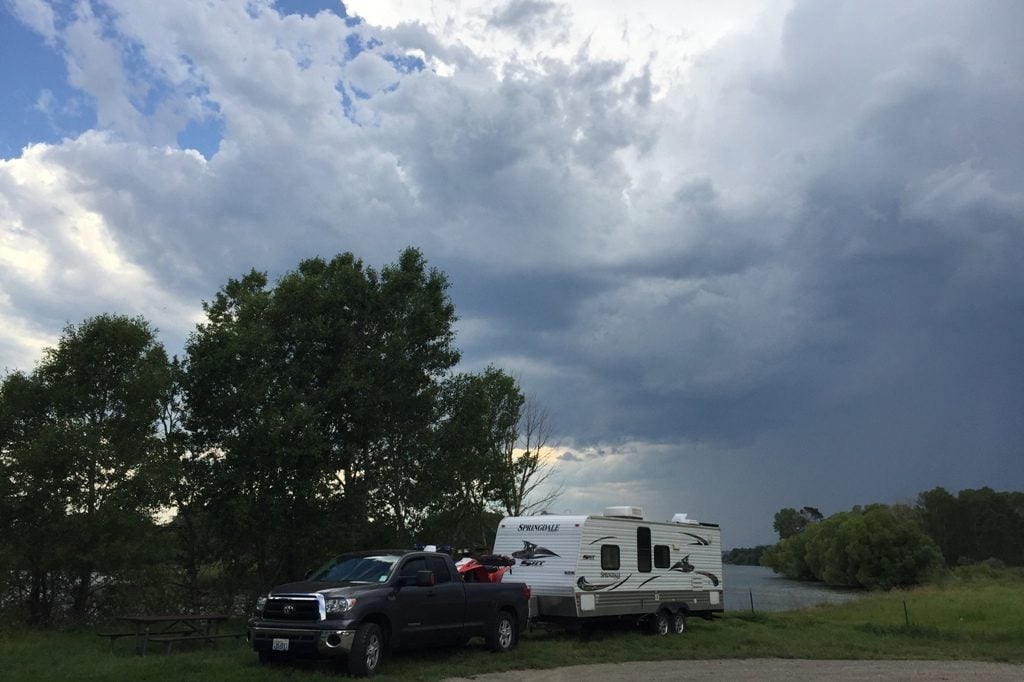 Since the site was level, we proceeded to cook dinner prior to unhitching the trailer and putting the jacks down. Just as we were finishing dinner, the next strange occurrence began to unfold when we spotted another RV coming down the hill into the fishing access site, slowly passing by our space either looking at our rig or seeing if they could squeeze into the remaining space in front of us, then proceeding to the other end of the access site where there were other areas to camp.

In short order, they were passing by our space again, this time stopping, at which time a lady got out of the vehicle and came towards our entry door (maybe she was checking to see if there were really people inside, unlike the other RVs). I stepped to the door to ask if I could help and she asked if we were staying. I let her know that we planned to stay the night and leave sometime the next day after visiting friends, that I just hadn’t had the chance to unhook and put the jacks down.

This is where it got real strange. She replied, “We are staying longer,” implying they were more entitled to the space than my wife and I staying only one night.

Now I could tell you how I responded, but I am more interested as to how the readers of this blog would have responded to this statement and its implications. Please share.

Also, to answer the question as to why there was nobody occupying the other RVs parked in the camping area? It wasn’t the plague, aliens or river creatures; it was the 50th Annual Montana Boat Float the coming weekend which brings hundreds of people, watercraft, and RVs riverside to participate.

Camping by yourself in a nearly “full” campground and then being asked to give up your space, just another strange adventure in RVing!