You are here: Home / New RV Products and Gear / The Dangers Of Portable Shelters & Other Outdoor Camping Gear
This post may contain affiliate links or mention our own products, please check out our disclosure policy here.

by Peggy Dent
February 27, 2021April 4, 2022Filed under:
Table of Contents show
The One Camping Accessory that Can Ruin Your Whole Day
The Dangers Of Portable Shelters & Other Outdoor Camping Gear
Will portable shelters hold up against the wind?
This is the danger of all portable shelters!
An out-of-control portable shelter swirling in the wind can do a lot of damage to an RV or car.
Other dangerous outdoor camping gear
It doesn’t take that much wind to be dangerous.
Outdoor dog pens 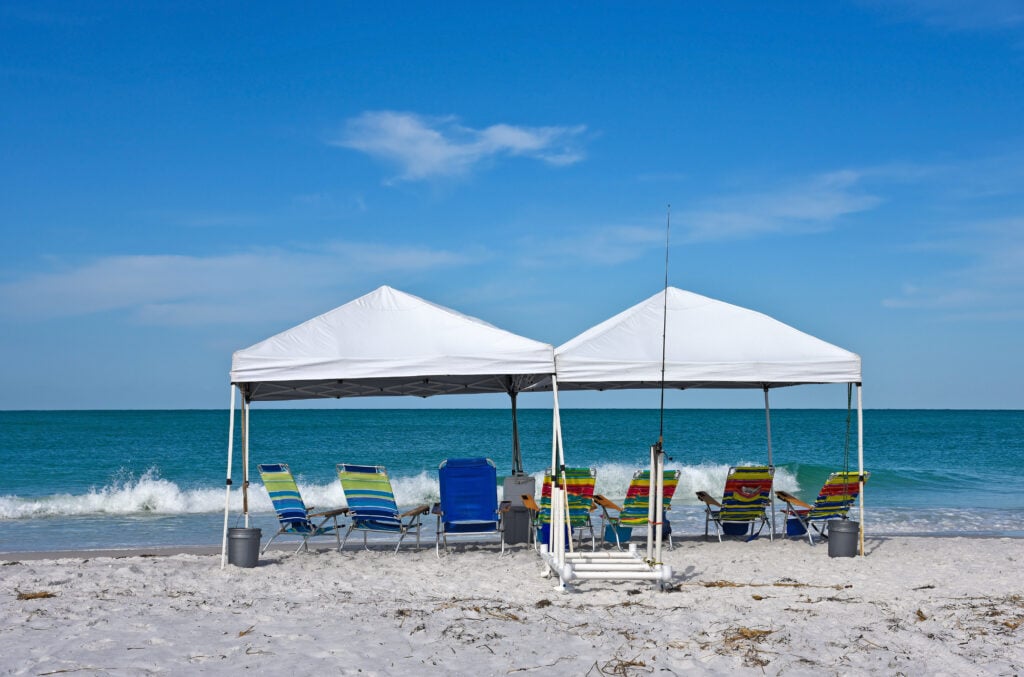 The One Camping Accessory that Can Ruin Your Whole Day

Portable shelters are a popular camping accessory, but most people never consider the dangers of these shelters when purchasing them. They want a lightweight covered shelter that is easy to set-up and store.

Either they want protection from the rain or a convenient way to get repositionable shade.  They’re better than the awnings attached to our trailers and motorhomes. These portable shelters can be moved for maximum shade wherever it’s needed. 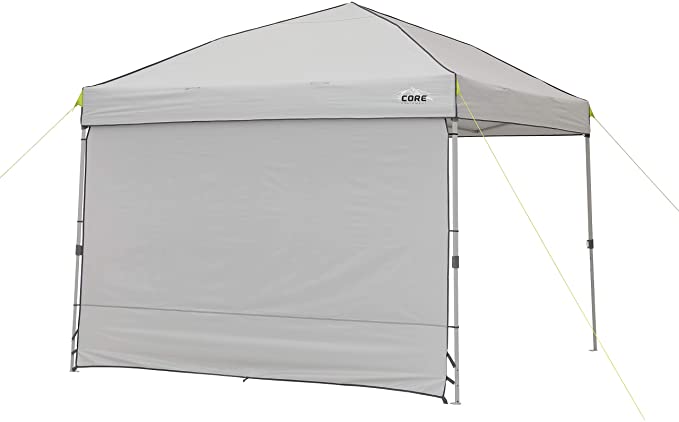 Portable shelter from Core with side panel and properly installed tie-downs.

Most people set them up over picnic tables or folding chairs around the fire pit. They want to enjoy more of the outdoors without getting soaked or sun burned. You can even buy side panels. Enclose a portable shelter on one or more sides for maximum weather protection.

The Dangers Of Portable Shelters & Other Outdoor Camping Gear

Portable shelters for RVs seem like a great solution to many of the weather problems that can diminish our outdoor experiences. But are they really a viable solution to too much rain or too much sun?

Will portable shelters hold up against the wind?

They come with four collapsible metal legs, a tightly fitted canvas top, and pegs to anchor the legs to the ground.  But most people set them up without the anchor pegs because one of two conditions usually exist. The ground is too hard to allow the pegs to be hammered into place. Or the ground is too soft to provide any real anchoring effect.

Most people use a portable shelter. They intend to move it to where it’s needed most. Anchoring it to the ground is counter-productive. The anchored pegs need removal every time the shelter is moved.

This is the danger of all portable shelters!

They are very lightweight and have a huge fixed “sail” made out of their canvas top. It takes very little wind under this sail to turn a portable shelter into a kite. Wind can lift the entire structure into the air, metal legs and all.

We have been at dog agility events where multiple canvas shelters were swirling through the air 20 or 30 feet above the ground. They twist and collapse. Their metal legs and framework bend and break as wind whips them through the air.  It’s very dangerous and virtually impossible to try and catch one of these structures if it’s fully airborne. 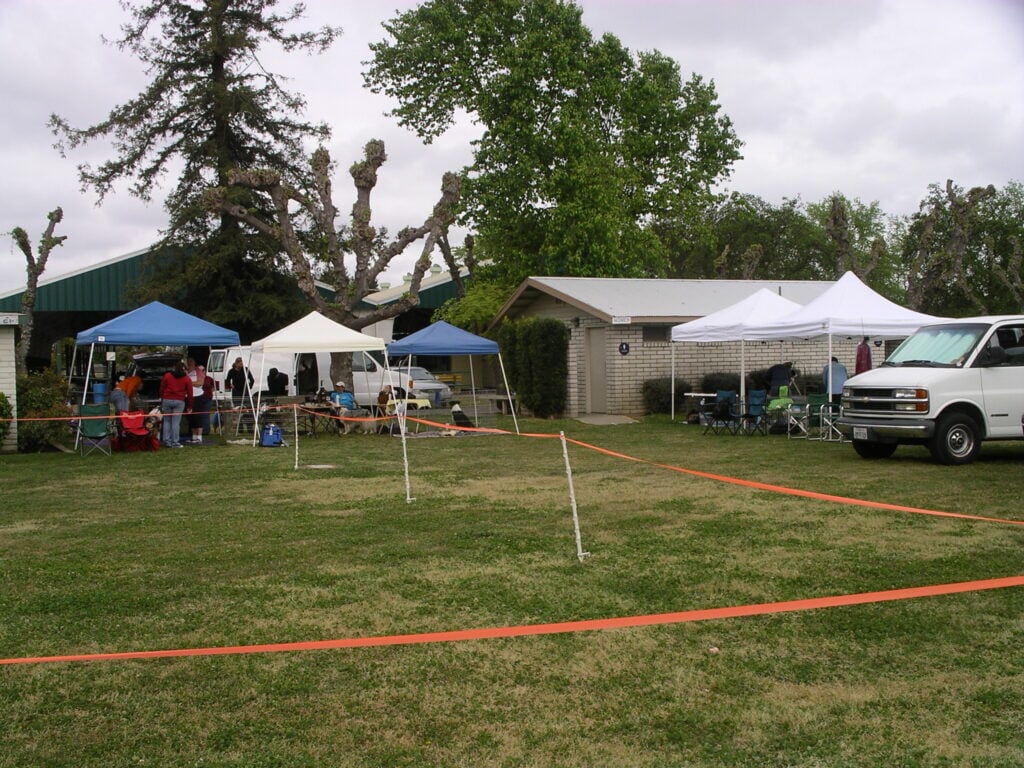 It doesn’t take much wind to move these portable shelters. I was watching (and worrying about) the portable shelter in the campsite next to ours when a small gust of wind lifted and moved it at least two feet. The wind was barely noticeable. But the canvas top caught the up draft of the wind. It lifted the structure completely off the ground.

An out-of-control portable shelter swirling in the wind can do a lot of damage to an RV or car.

Fortunately, there wasn’t much wind that day. The following day the neighbors packed up and left before the sustained winds of 20 MPH with gusts to 40 MPH arrived in the park.  You can see the damage those winds did to another shelter on the opposite side of the campground in the next two pictures in this article.

Even if they are pegged to the ground, it doesn’t take much wind to pull out the pegs. Or twist the structure until it’s mangled beyond usability.

How many twisted portable shelters have you seen in campground dumpsters?  That appears to be the fate of most of these structures.  They seem like such a good idea, until they’re not. On a calm day they are great for shade or as protection from the rain. But how many days are like that?

Portable shelters are not the only dangerous outdoor camping gear. I think campers need to be more aware of the dangers to themselves and others when they leave outside gear set-up in their campsites. Anytime it gets windy this gear is a hazard.

We pulled into a campground in Tennessee about an hour after a 70 MPH straight-line wind gust blew through the area. Trees were down, huge limbs had to be cut off many RVs, and there was camping gear strewn all across the campground: folding mats, chairs, barbecues, tables, propane tanks (some with their connecting hoses torn off), and portable fire pits.

Any of this debris flying through the air in 70 MPH winds could be a deadly projectile.  A folding chair could go right through a window or break an arm if it slammed into you at 70 MPH and a damaged stem on a propane tank can turn the tank into a bomb. 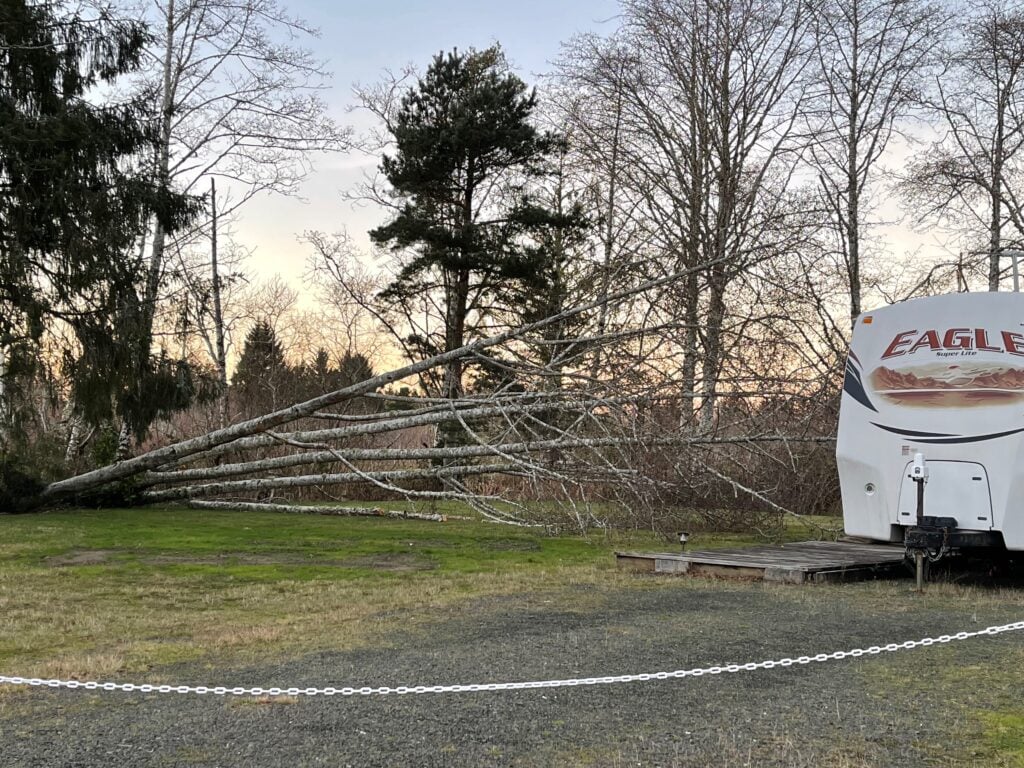 When the wind can topple a tree like this, it can also send your barbecue crashing into your RV or your neighbor’s RV.  Photo P Dent

It doesn’t take that much wind to be dangerous.

We were camped at Winchester Bay on the Oregon Coast and watched the wind break the metal restraints on the huge metal garbage bin and send it rocketing across the parking lot, toward a parked truck, like an out-of-control freight train.

Fortunately, several campers were out in this windstorm. We were able to run down the garbage bin and redirect its path before it slammed into the truck.  During that storm, anything and everything that had been left outside of any RV went sailing through the park. Some of it all the way into the bay.

At Winchester Bay, we had a 3-foot-high X-pen set-up for our dogs. X-pens are open wire constructions and offer virtually no wind resistance, but the wind still knocked it over and wedged it up against the door of our motorhome.

We had to exit through the driver’s door to get the X-pen off of the motorhome door. Our X-pen was anchored with pegs, but was toppled by the wind.  If the wind can knock over an X-pen with no wind resistance, imagine what the wind can do with a 10’ by 10’ sail tightly strapped to a metal frame. You don’t need to imagine it. The picture below shows the damage and the danger. 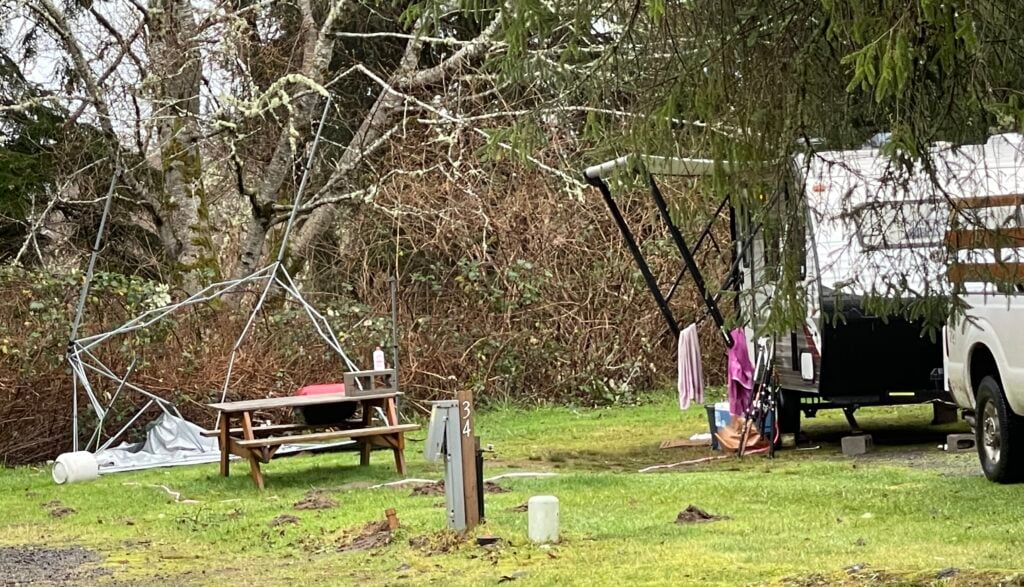 This is a twisted portable shelter after a moderate wind storm. See the frame is twisted and broken. The canvas top is partially ripped off. And the sharp legs sticking up. It shows the dangers of portable shelters when they are not properly anchored. Photo by P. Dent

Portable shelters can be a dangerous outdoor camping accessory. If you really want to use one, I strongly suggest that you anchor it securely to the ground. Pay attention to weather forecasts. Always dismantle it for windy conditions.

If your neighbor sets a canopy up in windy weather, share this article. Do it before their portable shelter blows out of their site and into yours!

Don’t just take our word for it. Youtubers Pure Living For Life share their experience in the video below. See how a huge windstorm destroyed their portable RV shelter:

See also: RVing In High Winds Doesn’t Have To Be Scary