You are here: Home / Blog / Ride Elvis Presley’s Favorite Roller Coaster
This post may contain affiliate links or mention our own products, please check out our disclosure policy here. 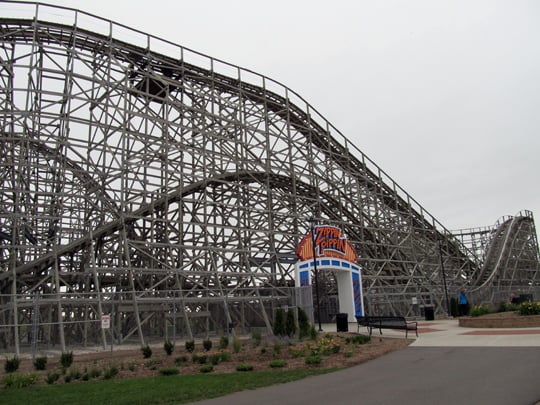 If you’re a fan of The King, you know that Elvis Presley’s favorite drink was Coca Cola, his favorite car was a Cadillac, and his favorite color was pink. But did you know he also had a favorite roller coaster— the Zippin Pippin? And you can ride it at historic Bay Beach Amusement Park in Green Bay, Wisconsin! The small park, open since 1892, is also home to bumper cars, a Ferris wheel, a merry-go-round, the Scrambler, the Yo-Yo, and numerous kiddie rides. Perhaps the best part is that ride tickets are only $.25 each, with most adult rides requiring one or two tickets. The Zippin Pippin Roller Coaster requires 4 tickets, so for just a dollar you can have as much fun as Elvis must have had! 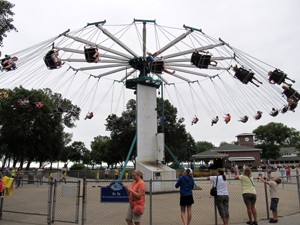 Truth be told, the Zippin Pippin at Bay Beach Amusement Park is not the original that Elvis actually rode. The restored coaster you see today was rebuilt here in 2011 using the exact specifications of the original 1923 wooden coaster that operated at Libertyland in Memphis, Tennessee until 2005. It is a classic out and back coaster that reaches a height of 65 feet and travels up to 45 mph. According to the informational sign, Elvis rented Libertyland on August 8, 1977 from 1:15 am until 7:00 am to entertain a group of about 10 guests. Decked in a blue jumpsuit with black leather belt, huge belt buckle with turquoise studs and gold chains, the King of Rock-n-Roll rode the Zippin Pippin repeatedly during a two-hour period. Elvis’s Libertyland rental was his last public appearance. He died August 16. 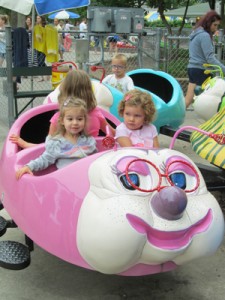 Bay Beach is the ninth oldest continuously operating amusement park in the United States. Situated on the east bank of the Fox River as it flows into Green Bay, the park is a budget-friendly place to spend a couple of hours or all day. Concessions and souvenirs are reasonably priced, and you can bring a picnic if you 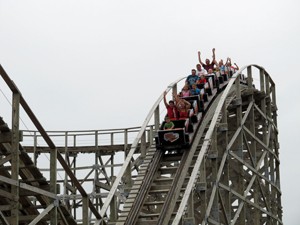 prefer to spend your money on dessert— cotton candy, sno-cones, ice cream— instead of burgers, fries, and pizza. There is no admission charge to get into the park, and parking is also free. Be sure to take a ride on the Bay Beach Train (two tickets). The route takes you on a short tour of the grounds along the picturesque bay and back to the train depot. All aboard!