You are here: Home / Great RVing Destinations / The Best Route 66 Landmarks And Attractions
This post may contain affiliate links or mention our own products, please check out our disclosure policy here. 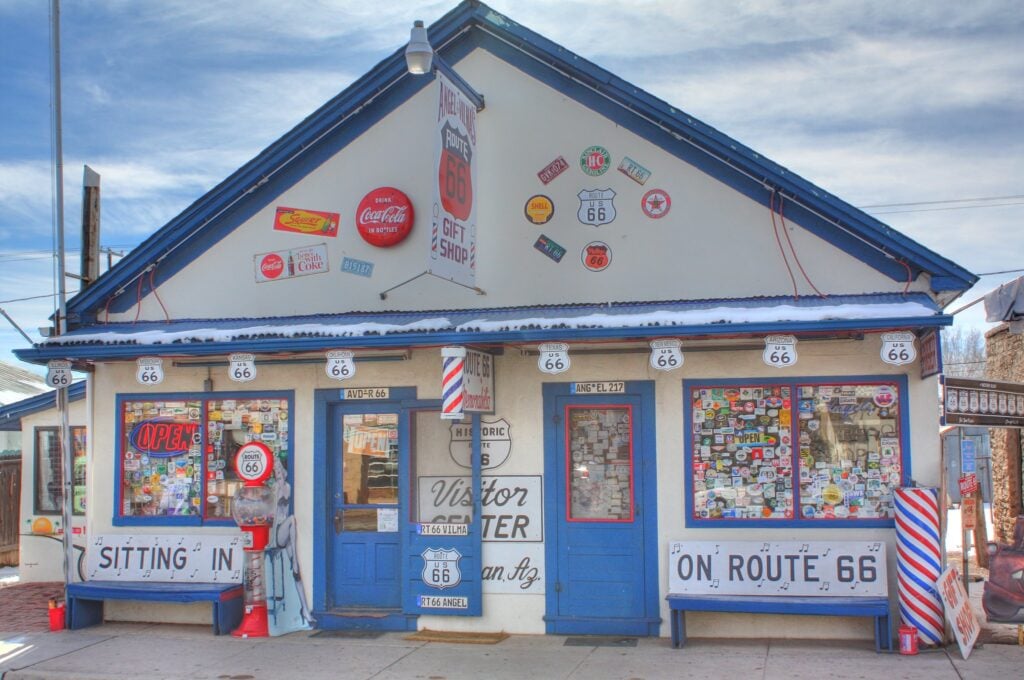 Seligman, Arizona gift shop – One of many Route 66 landmarks and attractions. Photo via Flickr Creative Commons

Get Your Kicks at America’s Top Route 66 Landmarks

From Illinois to California, Route 66 runs through 8 states and nearly 2,448 miles. Even if you only want to experience a part of this epic road trip, there is still plenty for a family to see and enjoy.

These are some of the must-see Route 66 landmarks and tourist destinations along the way.

You might want to start your trip at Chicago’s Grant Park. This marks the eastern terminus of Route 66. Several relics of Route 66’s heyday remain near the park, including Route 66 signage and the Clarence Buckingham Memorial Fountain. This is one of the largest fountains in the world and was constructed one year after Route 66 was completed. The fountain has lights at night and live music.

Head southwest to Pontiac and visit the Route 66 Hall of Fame or take a rest stop and see the historic Swinging Foot Bridges. 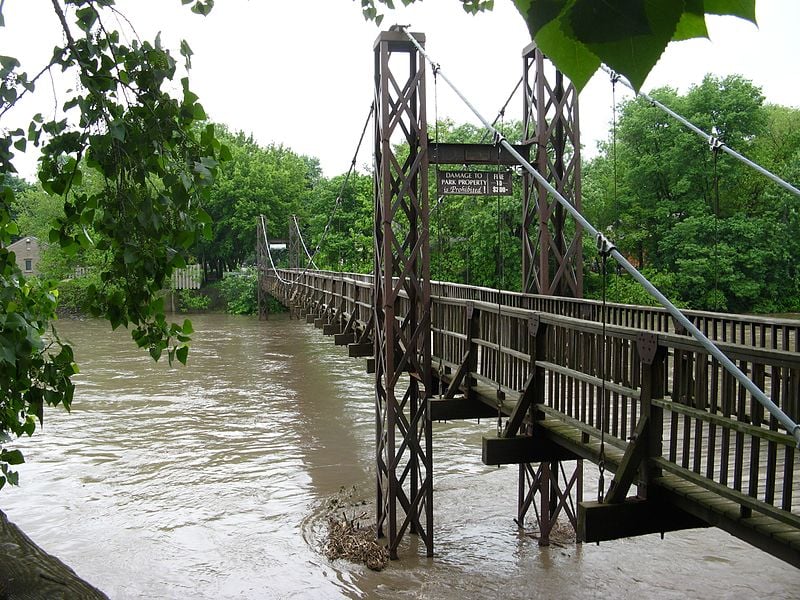 While passing through St. Louis, check out the “Chain of Rocks Bridge.” This famous bridge was a mile long and more than 60 feet above the Mississippi River.

It was a landmark for travelers who drove down Route 66 and a significant Route 66 attraction. Today, the bridge is linked to more than 300 miles of trails on both sides of the river and has become part of the Route 66 bikeway. It has also been listed on the National Register of Historic Places since 2006.

Cross another signature bridge in Devil’s Elbow and visit landmarks from the trail of Tears in Waynesville. Spend a day in Springfield, the Route 66 official birthplace.

Drive through the heart of downtown Joplin and don’t miss the Candy House Gourmet Chocolates where you can watch the candy makers in action, get free samples and tour the factory.

Murals at City Hall were created by Thomas Hart Benton and depict Joplin during the mid-20th Century. He focused on Route 66 and its relevance to the vitality of Main Street.

Route 66 only covers 13 miles through Kansas but be sure to check out the Route 66 attraction Cars on the Route in Galena for souvenirs. The old Kan-O-Tex service station at the north end of Main Street was restored by four women and was dubbed “Four Women on the Route.”

It opened as a tourist attraction which helped lead to the rebirth of Galena’s stretch of Route 66. It is now called “Cars on the Route” and the emphasis is on the connection to the movie Cars.

Oklahoma is home to the longest drivable stretch of Route 66 covering 426 miles. As you travel to your next destination, check out this giant milk bottle atop a grocery building in Oklahoma City. A favorite spot of route-goers, the store was listed on the National Register of Historic Places in 1998. The milk bottle was placed on the top of the building in 1948.

Just off I-40 and halfway between Elk City and Clinton, are two museums dedicated to all things Route 66. The National Route 66 Museum in Elk City is one of the most comprehensive with a journey through all eight states and plenty of memorabilia, including antique cars and Popeye memorabilia.

At the Oklahoma Route 66 Museum, located in Clinton, you can learn about the road’s construction, see vehicles from that time and take part in interactive activities. At the end of the museum, you can stop by the drive-in theatre or check out the gift shop.

“They have a lot more than we expected. Very nice selection of memorabilia. Knowledgeable workers. We very much enjoyed our visit. Thank you.” Athena Elliott via Google reviews

As you continue your journey, Route 66 bisects the Texas Panhandle. Don’t miss Route 66 attractions such as Shamrock’s Tower Station and U-Drop Inn with its Depression-era, art deco theme.

Stop in McLean, a ghost town preserved in time. Near Amarillo, be sure to wander the famous highway and see the Cadillac Ranch, one of Route 66’s most popular attractions. The sculpture is made up of ten old Cadillacs, half buried nose down, standing as a monument to America’s “Golden Age of the Automobile.” Graffiti is encouraged with passersby allowed to leave their mark.

Don’t miss the galleries, antique shops, and historic saloons in the Route 66 Historic District just west of downtown Amarillo. The MidPoint Café in Adrian marks the hallway point of the road trip.

Cadillac Ranch provides visitors with an opportunity to make their own mark on Route 66. Photo via Flickr.

As you continue west into New Mexico, you might want to travel the Route 66 Scenic Byway. This route offers spectacular views and allows you to experience the real Route 66 as it ran through New Mexico in its heyday.

Along the way, take in high desert landscape with red-hued cliffs or pine-wooded hills and valleys. Motels and 1950s diners with restored neon signs line portions of Route 66 while others wind through the wooded foothills of the Sangre de Cristo Mountains.

Travelers who opt for this road in New Mexico are advised to arm themselves with maps and road guides before setting out.

Near Albuquerque, New Mexico, the Route 66 Casino hotel features a Vegas-style casino themed with Route 66 memorabilia and is kid-friendly with Kids Quest and Cyber Quest arcade.

Indulge in the world famous half-pound Laguna Burger, served up fresh daily at the 66 Pit Stop location at exit 140. Route 66 shuttles provide complimentary rides. Laguna Burger was featured on the Cooking Channel and has been the location for several motion picture films.

Check out this mural in Tucumcari, New Mexico. Photo via Picryl.

Near Holbrook, stop at the Hubbell Trading Post on the Navajo Reservation or drive through Holbrook and see the Wigwam Motel, a museum of Historic Route 66 and the Hashknife Outfit, one of the west’s largest cattle ranches. It is also within walking distance of Goldies Route 66 Restaurant and the Grand Canyon Brewery.

In Seligman, Delgadillo’s Snow Cap Drive-In is still run by the original owner’s family. To lure visitors, Juan Delgadillo sliced off the top of his 1936 Chevrolet hardtop and adorned it with trinkets and an artificial Christmas tree. This restaurant takes on a funhouse vibe with fake doorknobs, slightly used napkins, and outhouse bathrooms behind the building.

Take the 159 miles of two-lane blacktop road all the way to Kingman and then brave the hairpin turns through the Black Mountains to the mining town of Oatman. Watch out for the wild donkeys that roam the streets or get to the Oatman hotel to see a bank robbery with all the Old West characters. 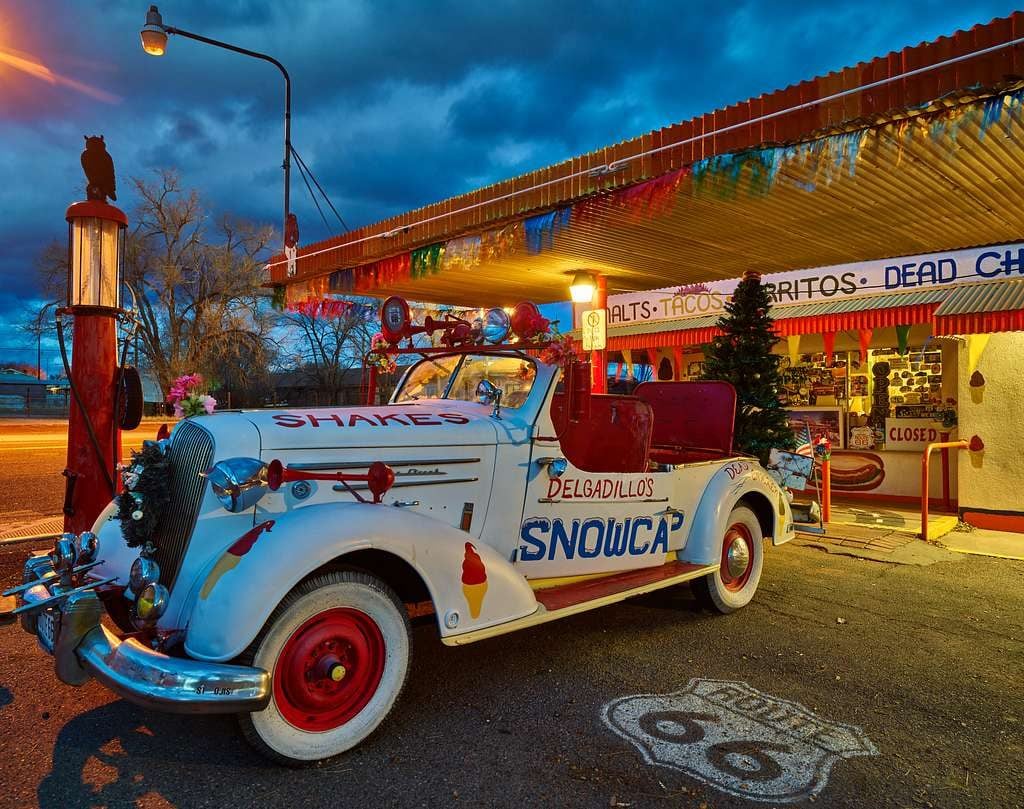 After crossing into California, stop in Oro Grand to see Elmer’s Bottle Tree Ranch. Order a burger at Emma Jean’s Holland burger in Victorville. Check out the Fair Oaks Pharmacy, a 1915 soda fountain in Pasadena.

The original western terminus of Route 66 was in downtown Los Angeles, but the route was extended to Santa Monica in 1935. A sign at the end of the Santa Monica Pier marks the “End of the Trail,” with a Ferris wheel, arcades, street performers, and plenty of restaurants and bars. 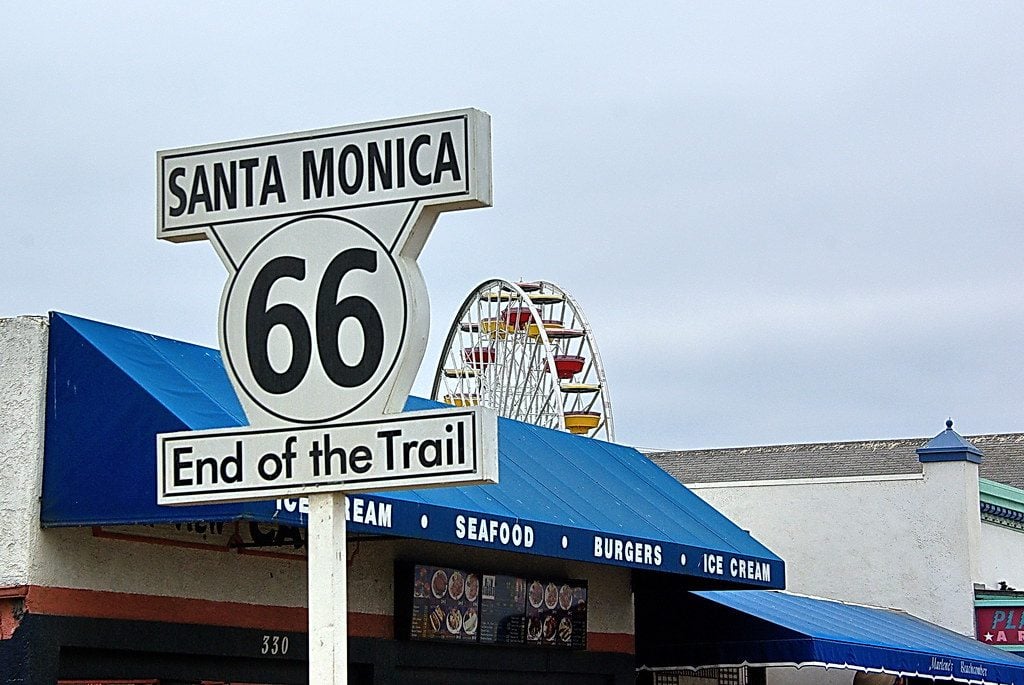 You can find even more Route 66 landmarks and points of interest while planning your route with RV LIFE Trip Wizard and the RV LIFE App. These online planning tools make it easy to plan an RV-safe route. They can also locate interesting sites along the way, all according to your travel preferences. Get RV LIFE Trip Wizard with its accompanying RV LIFE App, and start planning your adventure today!

Terri and her husband, Todd, are full time RVers and work campers. They have been living full time in their RV for nearly three years with their Cavalier King Charles Spaniel, Newton, and their Mini Aussie puppy Remi. They are currently wintering in Arizona with plans to continue their travels next summer. Writing is Terri’s passion but she also loves hiking, kayaking and anything she can do outside.