You are here: Home / Great RVing Destinations / The Best State Parks & National Parks Off Route 66
This post may contain affiliate links or mention our own products, please check out our disclosure policy here. 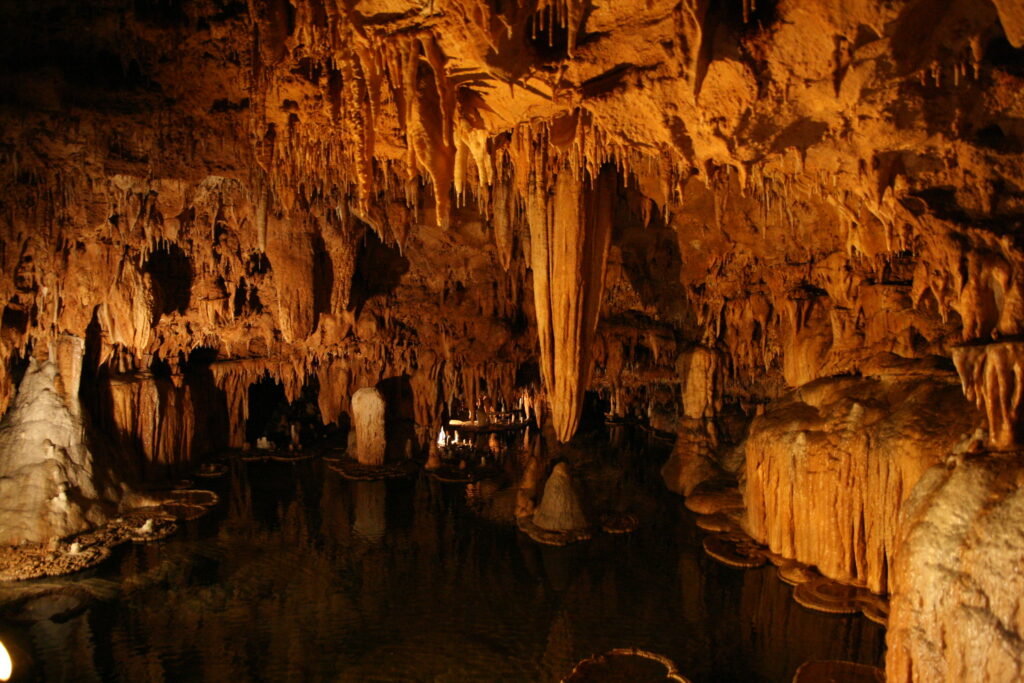 RVing Route 66? Here’s Where to Stay.

Many who choose to travel the historic Route 66 are enamored with its history. Others simply want the badge of honor that says they have traveled the famed route themselves. RVers love to see national parks and interesting state parks along their travels. So, what parks will you find on your way from Chicago, Illinois to Santa Monica, California?

Route 66 takes you right through Springfield, which happens to be where Abraham Lincoln lived for 17 years. You can take a tour of his home; it is set up to look like it was over a century ago.

It’s not just the Lincoln Home that has been preserved. The Lincoln Home National Historic Site consists of about four blocks and includes various sites like the Jameson Jenkins lot, a part of the Underground Railroad. Several houses still stand from the 1800s and some are available to tour.

Considered one of Illinois’ most picturesque destinations, Starved Rock State Park is less than 60 miles southwest of Route 66 from Joliet.  Situated in the central plains, Starved Rock is an anomaly with its canyons, sandstone bluffs, lush vegetation, and abundant wildlife. The topography was the product of violent torrents of meltwater from nearby melting glaciers about 20,000 years ago.

While Starved Rock State Park is open year-round, the best time to visit is in the winter and spring months when the park’s many waterfalls are flowing.  RVers seeking to explore every nook and cranny can opt to stay at the park’s campground.  Recreational activities abound and include bald eagle viewing, hiking, camping, fishing, boating, ice climbing, and hunting. Guided hiking tours and seasonal events are regularly scheduled.

For more information on Starved Rock State Park, head on over to the visitor center.  Learn all about the history and culture of the area, including the legend behind its name.  In addition, Starved Rock Lodge conveniently offers fine dining.

The Gateway Arch represents St. Louis’s role in expansion to the West. According to the NPS site, “The park is a memorial to Thomas Jefferson’s role in opening the West, to the pioneers who helped shape its history, and to Dred Scott who sued for his freedom in the Old Courthouse.”

The park’s most prominent feature is a 630-foot tall arch. Visitors can take a tram ride up to the top. When traveling through St. Louis, it is considered a must-see, and Route 66 travelers will be happy to know the route runs right through the area.

Since one of Missouri’s nicknames is “The Cave State,” it only fits that Onondaga Cave State Park is mentioned. Located just 7 miles off the beaten path from Bourbon, the state park is just as magnificent below as it is above ground.

After settling into your site at Onondaga Cave State Park campground, it’s time to take your pick on outdoor adventures.  Take a guided tour of Onondaga Cave and glimpse its remarkable formations–stalagmites, stalactites, and active flowstones. Stretch your legs and hike or bike trails leading to panoramic views of the Meramec River.  Canoe, kayak, fish, or swim all day and take a break to participate in a ranger-led nature presentation.

Onondaga Cave State Park is bustling with activities fit for every family member in the morning, noontime, or evening.

Formerly known as Red Rock Canyon State Park, Red Rock Canyon Adventure Park is operated by the town of Hinton, Oklahoma due to state budget cuts. What was once used as a winter campsite for Plains Natives and a pitstop for westward-bound settlers is now a popular rappelling area.

Red Rock Canyon Adventure Park’s red sandstone cliffs serve as the backdrop for all kinds of outdoor adventure. Besides rappelling down the canyon, other activities include walking on nature trails, hiking on a rocky trail, and fishing. Modern amenities like picnic areas, a playground, a swimming pool, and a bathhouse accompany the park’s campground.

Located just 25 miles south of Amarillo, Palo Duro Canyon State Park is our nation’s second-largest canyon.  Whether you decide to stay for the day or overnight, visitors and campers will have lots to do. A scenic drive of about 16 miles leads to the floor of the canyon.  The state park features miles of hiking and biking trails, horseback riding, wildlife viewing, and park-provided educational programs and hikes.  There is even a musical performed in the park’s outdoor amphitheater each summer.

Palo Duro Canyon State Park is open year-round.  If you plan to visit during the summer, be advised that the area quickly reaches temperatures over 100 degrees F, so plan accordingly.

The most extensive collection of ancient ruins north of Mexico is located in New Mexico. From the I-40, you have to take the NM-371 N and then turn right on NM-57 to get there. The site preserves an ancestral Puebloan culture dating between 850 and 1250 CE.

Chaco Culture National Historical Park protects the most advanced ancient villages in the Southwest. The buildings that dot this otherwise flat landscape reached up to five stories high and had hundreds of rooms. The stonework that has lasted for well over 1,000 years is a sight to behold. Though this site is about 60 miles away from Route 66, it’s worth a visit. There is a campground in the park as well.

Route 66 runs right through the Petrified Forest National Park. This park is filled with fossils from the dawn of the dinosaurs, known as the Late Triassic Period. If you love to hike and love geological history, you will want to spend some time at this park. In addition to the abundance of fossilized logs that give the park its name, you can explore historic sites, badlands, and desert flats.

There are no places to stay inside the park, but the nearby town of Holbrook has several RV parks to choose from.

Many people say the size of this famous river gorge is difficult to comprehend even when you are there. The canyon is 18 miles wide at one point and 5,280 feet deep (1 mile). That’s three and a half Empire State buildings stacked on top of each other.

Many Route 66 travelers like to take a detour off the route to see Las Vegas, NV, along the way. That makes the 80-mile detour visit to the Hoover Dam & Lake Mead National Recreation Area not so bad. Though the recent drought has caused Lake Mead to drop to historic levels, the dam itself that provides power to the areas is a sight to see.

Many people enjoy visiting the area, which has ample hiking activities and watersports such as boating and fishing. Plus, it’s only half an hour from Las Vegas. RVers can avoid the big city campgrounds by staying at the full-hook RV park by the lake.

If you plan to visit this area, keep in mind that summers are hot, with temperatures rising into the 100s daily. You will want to stay at a park with electric hookups because your AC will need to be running that time of year.

Right off of Route 66, between Needles and Amboy, California, lies Mojave National Preserve. The landscape looks like it came right out of an Old West movie. Visitors will find volcanic cinder cones, dunes, and Joshua tree forests.

If you are passing through in the spring, you will spot wildflowers throughout the area. One can also find abandoned mines and historic homesteads while exploring the mountains, mesas, and canyons of this park.

Like many national parks, the campground does not have full hookups, but it does fit big rigs and has a dump station.

The following video has some nice views of the campground from a couple who traveled there in a campervan.

There is plenty to do and see on a Route 66 RV adventure. When planning your trip, it’s great to have tools like RV Trip Wizard to find gas stations, RV parks, and many other points of interest. RV Trip Wizard gives you RV safe directions and can be used with the RV LIFE app to get turn by turn GPS navigation right from your phone.

Levi Henley and his wife, Natalie, workamp around the country in their
26-foot motorhome. Along with writing for RV magazines, they recently
published their first book together, Seasonal Workamping for a Living: How
We Did It. They share their experiences and RV-related tips on their own
blog henleyshappytrails.com as well as videos on their YouTube Channel,
also called Henley’s Happy Trails.