You are here: Home / Top Stories / Simplify The Process Of Dumping Your Waste Tanks
This post may contain affiliate links or mention our own products, please check out our disclosure policy here.

Dumping the waste tanks is a necessary evil in the RV world. Long lines at dumping stations, working with cumbersome hoses, rinsing the plumbing, and the scary risk of leakage are just some of the many realities of completing this thankless task. 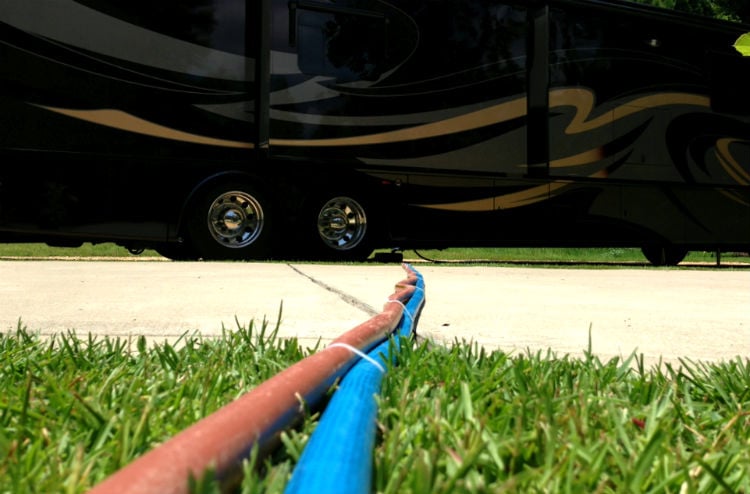 “This a process that should be uneventful and in a lot of cases that I have seen over the years, it hasn’t been,” says Doug Swarts, owner of California-based Drain Master, manufacturer of the Waste Master Transfer System and the Drain Master Electric Waste Valve, designed to simplify the dumping process in a few easy steps. “For years the transferring of waste has always been a gray area in the RV industry and needed to be addressed more for RVers.” 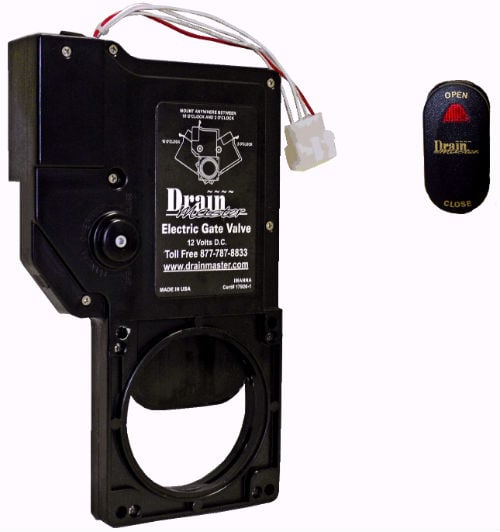 Installation takes approximately one-hour and is designed to fit most RVs as it uses a little more space than manual valve systems.

The Drain Master Electric Waste Valve, which is designed to simply waste water dumping process, replaces manual or cable pull valves and operates on a 12V DC platform that can run on any house battery of an RV.

It simply attaches to the black and grey waste tanks, and electronically opens and closes a three-inch ABS gate valve at a lighting speed of less than one second. The system is operated via a control switch that can be mounted inside your RV, the plumbing bay, or both.

According to Swarts, to operate, simply take out the transfer hose, put it in the sewer inlet at the dumping station, open the nozzle lever, push the valve buttons on the control panel, and the system does the rest.

Featuring 303 stainless steel gears to provide optimum torque for the waste gate, the Drain Master Electric Waste Valve system is said to accommodate most pipe sizes and highlights a set of exclusive seals to ensure reliability against leakage or wear. In fact, during initial testing, Swarts explained the unit was trialed for 3,000 cycles, which is the equivalent to RVers dumping the tanks three times a week, 52 weeks of the year, for 19 years.

“This was a system that was designed to withstand all the rigors of RVing and the outdoors environment,” said Swarts. “In the event of limited or no power, the valves can also be opened and closed manually.”

Ideal for serious do-it-yourselfers with minimal parts, installation is said to take approximately one-hour and is designed to fit most RVs as it uses a little more space than manual valve systems. For instance, it measures 10″ (w) x 6″ (h) x 1 3/4″ (d) and additional space may be required if RVers are installing 1 ½-inch piping.

For enthusiasts who stay at a campground for long periods of time (or full timers for that matter), Swarts explained that they can leave the hose attached to the system (depending on space in the plumbing bay), which greatly reduces and/or eliminates the common spillage of waste into the ground water and environment.

“The greatest single benefit of the system started with cleaning up the environment, which was one of the real key points of devising this,” said Swarts. The second part was the designing of a product that would withstand the rigors of commonly dumping the tanks repeatedly over a long period of time.”