You are here: Home / Top Stories / Understanding Lithium Batteries For Your RV Solar Power Solutions
This post may contain affiliate links or mention our own products, please check out our disclosure policy here.

Am Solar is proud to sponsor this article.

A solar power system in an RV is an efficient, practical, environmentally-friendly means of accessing power on the road. Yet, while using solar energy as a source to run everything in your RV is one thing, having that power when you need it can be a different story. 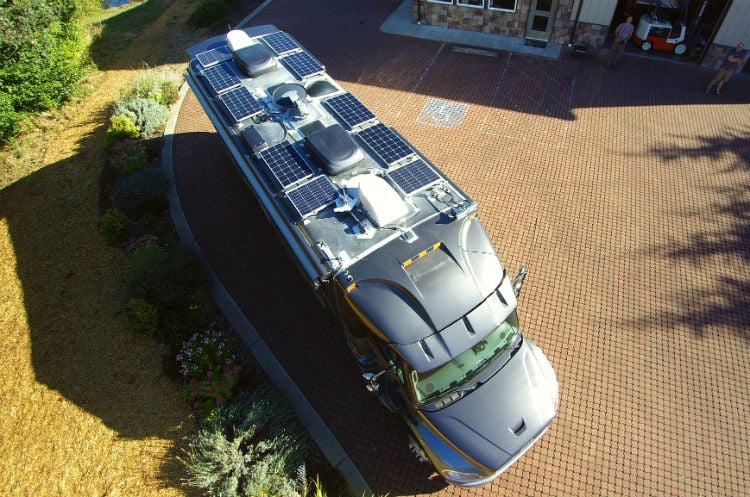 In simple terms, lithium batteries effectively store solar power from the sun and act as an energy buffer in an RV.

“Probably 50 percent of customers that order a solar system request lithium batteries, which efficiently store power from the sun,” says Garret Towne, president of AM Solar in Springfield, Oregon, a company that designs and manufactures solar power systems for the RV consumer market. “Lithium batteries have a lot of advantages, plus there is not a lot of maintenance and they are an easy charge.”

Towne explains the role of lithium batteries through an interesting analogy. 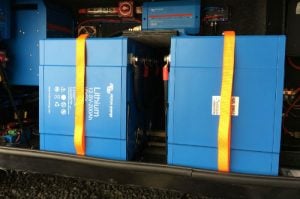 In even simpler terms, the lithium batteries effectively store solar power from the sun and act as an energy buffer in an RV.

While AGM (or lead-acid) batteries are a viable alternative, lithium batteries have additional advantages. For example, users can typically use approximately 50 percent of the power from an AGM battery before recharging. However, lithiums can draw power from as low as 80 percent of usage before needing a charge.

They also discharge a relatively constant voltage. Microwaves or other RV appliances, for example, can work quite easily off of a 60-amp hour battery. AGM batteries, however, require approximately 300 amp hours for this type of load.

“Lithium batteries can put out a lot more currents than lead-acid batteries,” says Towne. “As an example, a Sprinter van with a 200-amp hour lithium battery bank, when fully charged, can easily run all appliances, including a mini-fridge, microwave, the LED lights, laptops, and other electronics. In this case, an RVer wouldn’t really have to worry about power.”

Other advantages of this solar power solution: 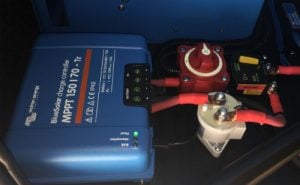 Options are plentiful when it comes to choosing power or a solar system for your rig.

“The power per cubic foot is much higher with lithium batteries over AGM batteries and the power per pound is much higher,” says Towne. “They also charge more quickly by solar energy, which means RVers don’t have to connect to shore power quite as long or even run a generator for long periods.”

Additionally, if RVers have a high output alternator in their RV, lithiums charge in a few hours while traveling. This means they can always attain a full charge even during unfavorable weather conditions.

Towne continued to explain that there have been some concerns about lithium batteries being susceptible to potential fires. But, he says the technology in the AM Solar lithium batteries is inherently non-combustible. 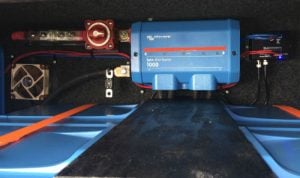 Lithium batteries are available in a variety of configurations to accommodate the often tight confines of RVs.

Are lithium batteries right for you?

On the retail pricing side, lithium batteries are considerably more expensive than AGM batteries. However, the benefits and value are much greater.

For example, lithium batteries have a lifespan of up to ten years (while AGM lasts up to five). They also charge faster, offer 3 ½ times more usable amp hours than AGM batteries of the same weight, and have a higher resistance to cold environments. In fact, they deliver more than 80 percent of its energy in -20°C temperatures.

“Lithium batteries are more expensive but the cost pays off in the long run,” says Towne. “If you are going to have your RV for just two years, definitely consider an AGM battery bank. If you’re are thinking of full-timing or planning on traveling for many years, lithium batteries are the way to go.”

Where to buy lithium batteries

Options are plentiful when it comes to choosing power or a solar system, regardless of class, make and model. Determining power options is perhaps just as important as the system that receives the solar energy for your lifestyle.

With many years of customer support and understanding top solar tech, AM Solar provides the right systems for RVers. To look into solar power options visit AM Solar or contact one of their installers to ensure the right choice for your life on the road.