You are here: Home / RV News / The New Starlink For RVs Will Keep You Connected
This post may contain affiliate links or mention our own products, please check out our disclosure policy here.

by Lucinda Belden
June 4, 2022June 6, 2022Filed under:
Table of Contents show
Stay Connected While Camping With Starlink For RVs
How does Starlink For RVs work?
The benefits
What’s changed recently
The cost of Starlink for RVs
Additional considerations
No use while in motion
No pro-rating on the pause feature
Lower priority for RVers
There are coverage gaps
Can’t switch from residential to RV service and back
Where to place the Dishy
Power usage
Existing network hardware 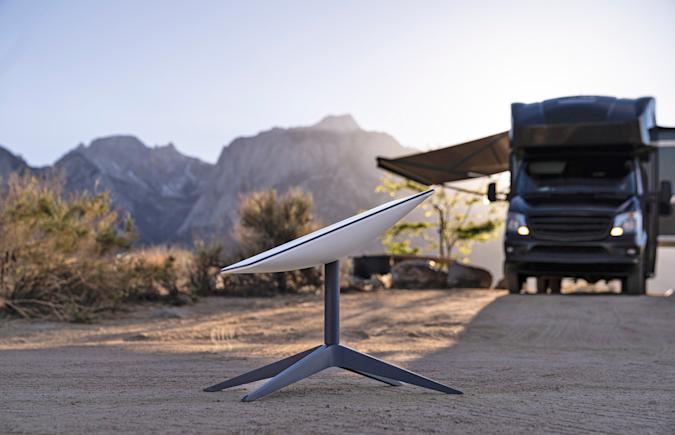 Stay Connected While Camping With Starlink For RVs

As a technical family, we rely heavily on the internet. People often ask us where we prefer to stay when we’re out on the road as fulltimers. Our answer is usually “near the cities, because we need good Internet access for work”. And that is the truth; we heavily examine the cell system coverage maps and check campground reviews before booking any campground.

We are also firm believers in redundancy and have cell packages from AT&T, Verizon, and additional hotspot data on our T-Mobile phones. And we all know, of course, that campground Wi-Fi is rarely worth even attempting.

But now, with the new Starlink RV just announced, we are really excited! This mobile internet will allow us to do more boondocking. While Starlink does have upfront costs, these expenses should easily be recouped by more off-grid camping during our travels.

In addition, for roughly the same monthly cost as any of our current cell packages, Starlink RV has potentially much greater speeds. According to PCMag, speeds can range from 5 Mpbs (Megabits per second) download to as high as 250 Mbps! The best cell speeds we’ve seen, infrequently, is about 110 Mbps.

How does Starlink For RVs work?

The transmitter/receiver you receive (called “Dishy”) performs an automatic alignment to get the strongest signal it can to the satellite array. As of May 2022, SpaceX has placed 2,400 satellites in low-earth orbit, and far more will be added in the future.

The satellites communicate with ground receiver stations, which are connected to high-bandwidth capable network connections to handle multiple user connections from Dishy transmitters. The included router is a full-feature Wi-Fi router that can provide connectivity to your phones, laptops, and more.

The greatest benefit from utilizing Starlink as your RV’s internet source is that satellites can offer coverage where cell towers are not or cannot be built. For those of us working or requiring consistent internet access, this is the most prized feature.

When we first started RVing fulltime several years ago, we had a vision of being able to park our rig anywhere and save money by not paying campground fees, but still be able to work. After the first time we parked in the boonies and didn’t have cell-based internet, that dream was crushed. From then on, we tended to stay in campgrounds.

The second greatest benefit, and one we have not seen with cell-based services, is the ability to pause your service. For example: You travel during the summer in your RV, but the rest of the time you’re at home, where you have a great fiber connection already and don’t need Starlink. You can ask Starlink to stop your billing (and service) until you request re-activation. Now you can take that three-month summer trip and have your internet too. (Sorry, you probably can’t pause your home internet service, but ask your vendor anyway!)

If you are someone who spends a lot of time on the phone, you may be able to take advantage of Wi-Fi calling too. This is where your phone uses an internet connection instead of a cell connection (it’s all digital, anyway). Just like replacing non-existent cell service with Starlink, you can now also make and receive phone calls in areas where you previously couldn’t. Wi-Fi calling is great for keeping in touch with the office, the kids, and the grandkids!

With Starlink RV, they have essentially combined those two packages into the same cost, and Starlink is prepared to work with us that travel the country.

The cost of Starlink for RVs

As stated above, Starlink has combined the residential service and portability feature into Starlink for RVs. This means the $110/month plus $25/month (Portability) equals the $135/month you’ll pay. The upfront costs are $599 for the Dishy and related hardware. 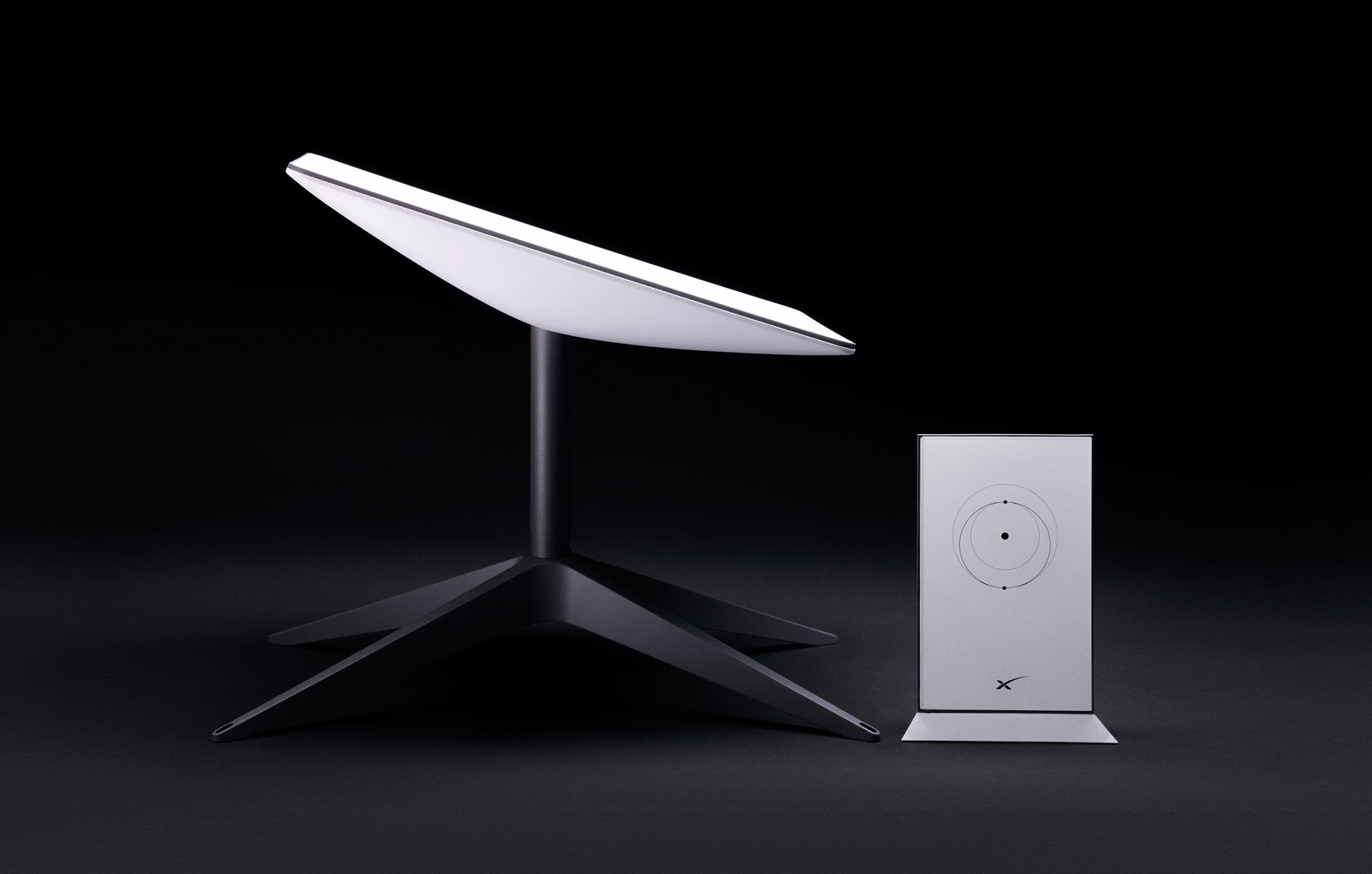 No use while in motion

Even if there were a great location where you could mount the Dishy and it wouldn’t fly away while on the road, there are two factors limiting this. The first problem is the dish will orient itself automatically when you set it up to get the best signal. Hills and turns wouldn’t play well with this, and you would find yourself waiting for it to capture a signal almost constantly.

The second, and most important, reason is that Starlink forbids it. The conditions of using Starlink means that you won’t attempt to use the unit while in motion. Break this rule and you could find yourself without service permanently and no refunds.

No pro-rating on the pause feature

Even if your vacation RV trip starts on the 25th of the month, re-activating your service means you will pay the full $135 for just the five or six days left remaining in the month.

If you deactivate the service on the 15th after two weeks of traveling, you are still paying for the rest of the month, even if you don’t use the service. There may be situations where resuming service isn’t worth the cost, and just relying on your existing cell service or bandwidth packages might be the economical choice.

Starlink RV has a lower priority than the other Starlink services. This means that if you’re using Starlink during peak hours or if an area has high congestion (lots of network traffic by other Starlink users), you’ll receive lowest priority on the network.

The truth is, though, if you’re in an area with no cell coverage, it’ll probably be years before this is a problem, unless you’re attending a large rally like Burning Man or an Escapees Escapade.

There are coverage gaps

As you can see from the map below, there are areas that are considered “Waitlisted”. This may be only related to the home address, and being in another location may solve the issue. It may also be a lack of ground stations in which the system connects to the physical backbones of the internet. 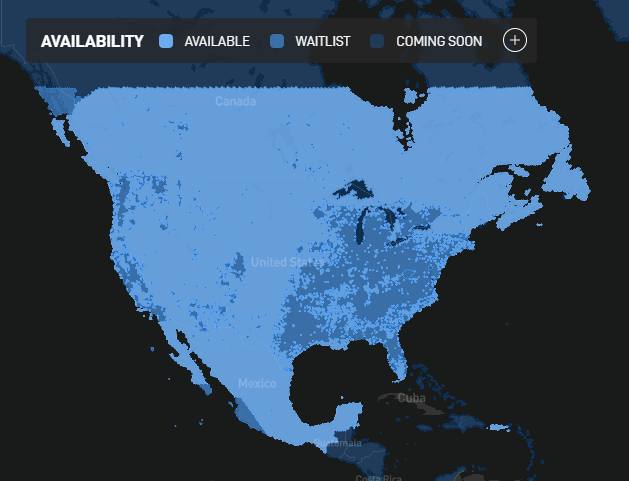 In these situations, you may find your Dishy attempting to acquire a signal repeatedly and never locking in. We discussed redundancy earlier; this is still important if you rely on internet access.

In addition, you must have a clear view of the sky between your Dishy and the satellites. Trees, buildings, and other obstructions will prevent you from acquiring a signal and being able to access the internet with Starlink. Cell-based services do not suffer from this particular issue.

Can’t switch from residential to RV service and back

If you are a seasonal traveler, you need to choose between Residential+Portability and Starlink for RVs.

Why does this matter? The Residential service has access to higher priority than the RV product. Consider what your needs truly are before choosing a package because you can’t switch. If you wanted both, you’d have to pay an additional initial cost and have a second Dishy.

Where to place the Dishy

There are security features built into the Dishy, but if your mindset is like ours, you might be thinking about theft. After all, $600 is a good chunk of money to invest, and Dishy must be placed outside.

Things on the ground can be hit by lawnmowers or be subject to vandalism. Things placed on the RV roof require climbing a ladder for each setup and again for removal.

Lastly, Dishy comes with a 75-foot cable to provide power; you’ll need to consider how you’re going to route this. You’re going to need to connect this cable to your router, which means coming into the rig somehow.

If you are going to place Dishy on your RV roof, we recommend some form of mounting base to prevent a windy day from blowing your $600 equipment onto the ground!

There are two components to the system: Dishy and the inside-only router. Dishy itself requires a single connection, and that 75-foot cable is built on “power over ethernet” (PoE), meaning that the single cable provides both power and network connection. That power is provided by plugging the Dishy cable into the router and plugging the router into a normal 110-volt AC power socket.

It’s unlikely you’ll be able to do a direct 12-volt DC wiring setup. Instead, you’ll need to rely on campground power, generator power, or batteries and an inverter. The system uses about 100 watts per hour, so you’ll need to factor that in.

For boondockers, this might mean turning the system off when you aren’t needing to utilize it to reduce power consumption. Remember, an inverter has additional power-loss due to the overhead of just using the inverter.

When we got started on our fulltime journey, we installed a Pepwave system to provide internet and local area networking to our household. We have AT&T and Verizon SIM cards for the redundancy, but the system also has a WAN (“wide area network”) port.  This is so you can plug in a standard ethernet (RJ-45) jack to allow another network to provide an outside connection.

The current, second-generation Dishy and its router do not come with this capability (the original first generation version does), but there is an ethernet adapter you can add.

The Pepwave allows us to use “Wi-Fi as WAN”, much like connecting to campground Wi-Fi. In this case, we are able to use the Wi-Fi of the Starlink system in the same manner.

If your existing system has a WAN port, you might consider this, as it allows (in our case) the Pepwave to choose the best connection available. The approximate cost is $25.

To learn more about the new Starlink RV service, visit their website at www.starlink.com/rv.

One of the best parts about RVing is engaging with the community of traveling enthusiasts. iRV2 forums allow folks to chat with other RVers online, and get other perspectives on everything RVing, including products, destinations, RV mods, and more.

Lucinda Belden is a travel writer and advisor.  She gets her inspiration from her and her husbands full-time RV lifestyle, her avid motorcycle/sidecar adventures, and world travels.  Lucinda is the Program Director for MyRVRadio.  Follow her stories and adventures at fb.com/DirectionWideOpen.