You are here: Home / Top Stories / Step Into The Past of Pendleton, Oregon
This post may contain affiliate links or mention our own products, please check out our disclosure policy here. 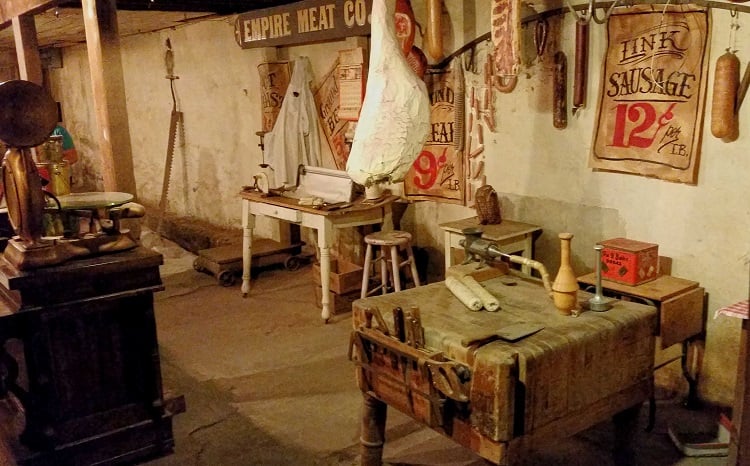 A portion of some of the services that were once offered in The Pendleton Underground. Photos by John R. Swaim

Sitting in my travel rig while enjoying an early morning cup of coffee, I see fellow-wheeled voyagers packing up and rolling out. They must have stopped for an overnight rest and are now heading back on the road to somewhere. My questions are: why be in such a hurry? Why not stop for a day or two and explore Pendleton, Oregon?

There’s a lot to do in this small town situated on the Oregon Trail, and neither the town nor a goodtime are hard to find. Located in the North Eastern part of the Beaver State, the municipality is located right off of the I-84 Interstate. From our base camp east of town, it’s a quick gallop to a day of exploration, surprises, and discovery – above and below ground.

The first and probably most famous locale associated with the name Pendleton is the manufacture of fine-colored woolen shirts. There are two wool product producing industries and the one you think you know, well, isn’t here. Those infamous, warm, winter frost-blocking outer garments aren’t made in Pendleton. In fact, that factory is located across the Columbia River and three hours west, in Washington. What is fabricated within the city limits is some of the most beautifully-crafted Native American design blankets my eye’s have ever had the pleasure of scrutinizing. From raw wool beginnings to finished product, they are all made onsite and everyone is invited to witness how they are weaved. A tour of the factory floor reveals the publicly-known secret that began in 1909. Large laundry hampers full of multicolored wool thread on giant spindles greet visitors. Giant machinery does everything from drawing and spinning raw wool into thread to monster weaving apparatuses that create a finely finished, cold-rejecting cover that is truly American art.

These are not just run of the mill production output products. Custom orders are created for numerous requests from Native American organizations, tribes, associations and colleges for unique designs defining their heritage. Every company employee is proud of the family-owned business and that pride is displayed daily. The staff answers questions and explain the preservation processes of these important early history-saving endeavors. 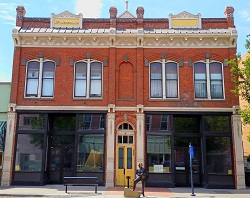 back into ones childhood and simpler times. Friendly folk in restaurants are always willing to share a story or two about the town’s history. It’s hard to believe that this calm, old wheat farming, sheep- and cattle- raising town has a jaded past. In fact, at one time, it was not such a quiet place. In its wilder days, the town was home to no less than 30 saloons and gaming houses, and 18 brothels. Young, wild and gangling range riders and dirt-crusted sod busters would drink and revel on most any day of the week into the wee hours.

Today, Pendleton is much calmer compared to its wild past – at least for 51 weeks of the year.

Annually, in September, the old days are reborn. Since 1910, the city annually hosts the Pendleton Round Up, Oregon’s largest and one of the nation’s best rodeos. During Round Up, the town’s population of approximately 17,000 swells to more than 70,000.

Rodeo cowpokes and Native Americans converge on the town stadium as assorted Wild West wannabees emulate them and greenhorn tourists invade the city. Revelry of the past is reignited and the town’s untamed days are given a rebirth (except the part about the brothels). Any RVer planning to attend should reserve their temporary homestead early or boon docking on the open range might add to their Wild West experience.

An antique store in Pendleton.

If you’re still not convinced that this calm, quiet place has a raucous past, leave the streets and venture below into the quiet Pendleton Underground. This tour provides an authentic feel of the past and defines just how rowdy Pendleton once was. Chinese Immigrants, who remained primarily out-of-sight, dug out, by hand, a series of tunnels and living quarters beneath the town. These connected a lower city, running the length and breadth of the avenues above. A different life thrived down here with sleazy bars and speak easy’s ran non-stop. A Chinese laundry flourished and dirt-encrusted range roamers could get a bath and have their clothes washed and flat-ironed before venturing upstairs to visit the working girls. There was even an ice cream parlor, a fresh meat market, and bowling alley – all situated below the morally civilized businesses.

Visiting Pendleton would not be complete without a trip to the Umatilla Indian Reservation and the Tamástslikt Cultural Institute, the only Native American museum along the Oregon Trail. The Institute preserves the heritage and tells the story of the Cayuse, Umatilla, and Walla Walla tribes. They lived in the area centuries before it was discovered by pioneers of European descent and settled by the continuing expansion of the United States. The museum places visitors into the daily lives of the Native people and tell the story of living in balance with nature. It was ancient culture that was misunderstood and deemed primitive. It was also nearly destroyed by violence and disease. This is an insightful piece of American history that no one visiting Pendleton should pass by.

All in all, an avid road roller would do themselves pleasure checking out Pendleton for a few precious days. It’s not hard to do. Within the vicinity are numerous RV parks to reside in and for the most part, they have vacancies all year – except for that one particular week in September.