You are here: Home / Blog / The Silver Gypsy: God Bless All Volunteers
This post may contain affiliate links or mention our own products, please check out our disclosure policy here.

by Sharlene Minshall - The Silver Gypsy
February 19, 2014Filed under: 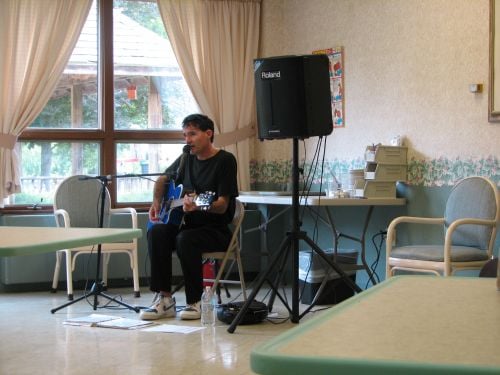 I visited my oldest brother’s widow, Mary, when I was in Michigan last summer.  I walked in the dining room as she was eating lunch.  She sat by herself.  I walked up, gave her a kiss, and asked if she knew who I was.  She said “Nooo.”  I said I was Sharlene and her face brightened into a big smile when she realized who I was.  I hadn’t seen her for four years and a lot had happened in her life since that time.  However, she hadn’t forgotten she was as close to being my big sister as anyone could be.

After lunch, I asked if she wanted to go outdoors.  I had talked with my nephew, her son, and he said that was one of her favorite things to do.  We chatted as we went along following a grassy track and eventually we wound up quite a ways from the facility.  We were near a small lake with a railroad track down the hill and across the fence.  I asked her if she thought we could run down the hill and jump the fence fast enough to make a quick grab and climb into a passing freight car.  She looked at me so funny, laughed her sweet laugh and said, “Nooo, I don’t think so.”

When we returned, I didn’t realize we were going to set off all the bells by opening the door …but we did.  Kind and patient personnel made sure we got back inside but I was a little afraid they were going to put me in a room as well.

Something was happening in the music room and I asked Mary if she would like to go see and she agreed.  We waited patiently for everyone to arrive.  A few walked, most either wheeled themselves inside or someone brought them in by wheelchair or on a cart.

His name was Dean Jamison and in between singing songs from the 30s and 40s, he told a joke or a story to a room filled with 25 patients.  Once I looked over at the lady on the cart.  She was completely still in her blanket-bound world, except that a finger was going up and down against the cart.

“Listen to the rhythm of the falling rain…”

He continued to play, not at all disturbed by a decided lack of response.

He told a series of string jokes, “This string walks into a bar…”

“Because you’re mine, I’ll walk the line…”

And then, he asked them to sing along.

I’m back in the saddle again…”

One or two sang right out and enjoying it immensely.

“These two peanuts were walking down the street; one was a-salted”

As he sang and talked, Mary and a few others nodded off.  They awakened and others nodded.  The caregivers enjoyed the music, sashaying in and out doing their jobs while keeping an eye on the patients.

“There you go; break another heart…”

Dean finished his 45-minute program and began to take down his sound equipment.  He brought everything with him and said he stopped by several times a year.

I said my goodbyes to Mary, knowing I would see her two more times before continuing my trip. Since that time, she has moved three hours closer to her son and in that facility, they have therapy dogs once a week and Mary loves stroking the dogs.  God Bless until next week and if you are a volunteer or you know of people who volunteer in any capacity, give them blessings as well.