You are here: Home / Blog / The Silver Gypsy: Ye Olde Muddy Campground
This post may contain affiliate links or mention our own products, please check out our disclosure policy here.

by Sharlene Minshall - The Silver Gypsy
July 2, 2014Filed under: 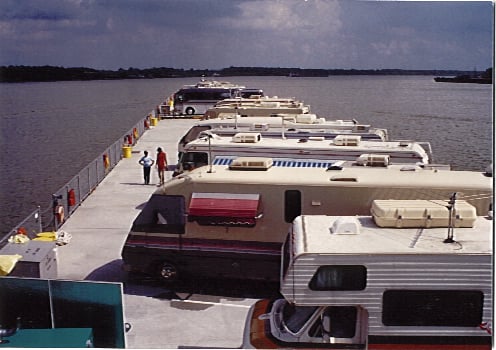 This story about very unique camping on the Mississippi River was published in 1995.  It was an amazing trip and I was blessed to experience it.

“Gentlemen (and ladies), start your engines.”

Like the pros they were, twenty-seven RVers scaled the levee on the Intercoastal Waterway at New Orleans, LA, crossed the ramp, parked on custom-built barges, and plugged into full hookups.  Excited Becky Thatchers and Huck Finns were on their way to a 450-mile modern version of a Mark Twain adventure on the Mississippi River.

Captain Ray Gaines of RV River Charters, Inc. of New Orleans, greeted us,  “Welcome to the most unique campground in the whole world.  Put your rig on true ‘cruise control.’  Sit back, relax, and let the world go by.'”

Three fuel barges were reconstructed and linked together to make an 800-foot cruising campground with a capacity for forty-two RVs.  Each barge stores l0,000 gallons of fresh water, and provides l0,000-gallon tanks for gray and black water.  A million pounds of concrete assures solid, level parking for even the largest rigs.

Life jackets waved from outside mirrors.  Preservers, fire-fighting equipment and alarms were appropriately spaced along the rail.  If necessary, a black button on the fire alarm would immediately kill the electricity to all barges.

A “bow thrust” was guided via remote control from the tugboat, LaGonda, our guardian angel.  Capt. Gaines assured us, “The water is never more than one-quarter-mile wide.  The depth is approximately twelve feet and the barge is nine feet high.  If we sink, we’ll be up to our necks in about three feet of water.”

We nested into our own RV spaces.  Flowers and plants held carpeting in place beneath awnings unrolled for shade.  No matter where we were, how many miles we traveled, what time of day it was, or what the weather did, we retreated into our own RV homes to sleep, eat, rest, entertain, or hide from the world.

Passing us as we progressed eastward along the Intercoastal Waterway, hard-working “I know I can” tugs pushed as many as thirty-six barges at a time.  Shrimp boats glided by with their arms folded.  Oil drilling equipment reached for the sky.  Swamped relics of bygone days grew rust and flowers.

Workers put tools down in surprise and shouted, “Where y’all goin’?”

At dusk we touched shore at Houma to pick up catered mufalettas, giant Cajun sandwiches filled with spicy seafood.

Only the hum of the engines, the 80 kW generator, and the night sounds disturbed the quiet of the wee hours.  A pale moon disappeared as the mist crawled over the railing along with the ghost of Jean Lafitte, renowned pirate from the days of yore.  Was he returning for the treasure legend says is buried in the bayou?  Only the shadows knew.

The Cajun Man, “Black” Guidry, appeared in the morning mist to take us through the purple hyacinth plants and the Spanish moss-covered trees to see the land where he was born and watch the herons, cranes, and egrets fish in the swamp.

He called up the alligators.  “They can’t see very well.  They come to the sound of my voice and the engine.”  As though on cue, an alligator startled everyone by leaping out of the water to snatch the offered chicken fat from a pole.

Our grande raft crowded the dock.  Costumed dancers twirled while we savored King Cake and the band played on.  Doubloons, necklaces, and masks were tossed.  It was a taste of Mardi Gras and a “Lagniappe” (Lan-yap – an extra measure) of hospitality from Morgan City.

“Drop anchor at Whiskey Bay and wait for the golden limousines.”  School buses found their way through the bayous of Acadiana where Cajuns are descendants of the Acadians exiled from Nova Scotia in l755 and immortalized by Longfellow in his poem, “Evangeline.”

McGee’s Cafe, a family restaurant on the edge of the Atchafalaya Swamp, is a reconstructed sweet potato shed where we stifled hunger pangs with Cajun Crawfish maque chou, blue channel catfish, stuffed crab, and syrup cake (exclusive to McGee’s).

A traditional Cajun band played the “Cajun Two-step” for the young at heart.  Outside, watching a glowing sunset beyond the bayou, others danced to the tune of lively mosquitoes.

The tug guided us through the fifteen-foot raise in the New River Locks and on into the great muddy Mississippi.  On-board activities included skits, an authentic Cajun storyteller; a juggling clown, and original songs.

On a land tour near St. Francisville, Richard Barnes, the owner of the Antebellum mansion, Greenwood, was our host.  “This is my home, please sit on the furniture and walk on the rugs.”  The house burned in l960.  Mr. Barnes’ family bought the charred remains and built an exact duplicate.

The Myrtles, an l850s plantation home built on sacred Indian burial ground, is authenticated by the Smithsonian Institution to be the most haunted house in America.  The voice of our hostess became highpitched and excited as she related ghostly activities she herself witnessed.  She made believers of us.

An avenue of 200-year-old Live Oaks led through twenty-eight acres of formal gardens to the elegant pillared mansion at Rosedown.  The 13′ 8″ Henry Clay bed was built as a gift for Henry Clay for winning the presidency.  He neither won nor had a house large enough to accommodate the huge bed.

Touring the USS Kidd and Nautical Center at Baton Rouge prompted wartime stories.  Known as “The Pirate of the Pacific,” the USS Kidd still flies the skull and crossbones.

At New Orleans, we docked beside the Riverwalk amid a party atmosphere with tugs whistling and The Natchez Paddlewheeler playing our song, “King of the Road,” on their calliope.  Charlie’s Jazz Band played us ashore with, “The Saints Go Marching in.”  A Strutter in gold shoes, red pants, black tails and a fancy umbrella, led a second line dance to catered bowls of seafood gumbo and bread pudding with hot sauce.

Our bus-tour hostess explained wrap-around balconies, row houses, shotgun houses with camelbacks, and great family tombs built above ground in the cemeteries.  New Orleans receives sixty-six inches of rain per year and sits three to ten feet below sea level.  This causes grave problems in the “Cities of the Dead.”

With three-day passes for buses and trolley rides, we descended on the French Quarter.  Cafe du Monde was the place to people watch and sin outrageously with Cafe au lait and beignets (bin-YAY), a square, hot pastry excessive with powdered sugar.

And then Bourbon Street…honky tonk and traditional Dixieland jazz…no matter the time of day or night.  New Orleans was the Court of Two Sisters, Pete Fountain, Pat O’Brien’s, the skyline at night and more..so much more..but it was time to go.

We gathered at eight a.m. on the tenth morning to a whispered prayer, “Please, Lord, don’t let it rain on the cinnamon rolls.”

Capt. Gaines said his goodbyes with, “Thanks for letting us ‘barge’ into your lives.”

Addresses, invitations, and hugs were exchanged.  We were strangers no more.  We departed, California to Maine, Washington to Florida, “til we meet again.”

Hope you enjoyed this fuel-free RV trip on the Great Mississippi River.  I could find no evidence that anything like it has been offered in several years.  God Bless and have a safe and Happy Fourth of July.