You are here: Home / Blog / Great Escapes: Chaco Culture National Historical Park
This post may contain affiliate links or mention our own products, please check out our disclosure policy here.

The Four Corners region of New Mexico, Colorado, Utah and Arizona is well-known for its ancient stone ruins and cliff dwellings that date back 1,200 years or more. The builders of these early dwellings were formerly referred to as Anasazi Indians, but the term Ancestral Puebloans is instead used today. Chaco Culture National Historical Park is a site best known for its multi-storied “great houses” that contain hundreds of rooms. Although the park is located in a remote part of New Mexico, it’s worth the trip— especially since it is a UNESCO World Heritage site. Only 21 unique sites in the United States bear this distinction, so you know Chaco is a very special place.

One of the great houses in the park, Una Vida, is a short walk from the visitor center’s parking lot. About 150 rooms and five kivas comprise this structure. Kivas are typically circular, subterranean, multi-purpose rooms used for councils and ceremonies. Una Vida is an excellent example of a mostly unexcavated site. From here, a nine-mile paved loop road accesses five major Chacoan sites. Self-guided trails are marked at each site so you can get a closer look. 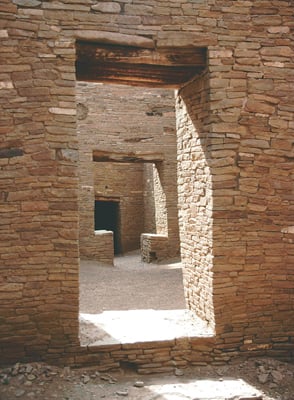 Pueblo Bonito, one of the most extensively excavated and studied sites in North America, was once four stories high and contained over 600 rooms and 40 kivas. Chetro Ketl, another great house, has an estimated 500 rooms and 16 kivas. Its builders constructed an immense elevated earthen plaza that rises above the surrounding landscape. Pueblo del Arroyo was erected in stages over a relatively short time and is comprised of about 280 rooms and more than 20 kivas. Kin Kletso seems to have been built in stages as well; this great house had about 100 rooms and five enclosed kivas. Casa Rinconada, on the south side of Chaco Canyon, is the largest known great kiva in the park.

The ancient people who lived at Chaco were highly knowledgeable and skilled in astronomy, so its only natural that the park offers astronomy programs, slide shows, and solar observations several times a week at the Chaco Observatory. Park lighting has been retrofitted to reduce light pollution and enhance night sky viewing. And because of the extremely dark sky that occurs at the park, groups of amateur astronomers often visit Chaco during the darkest moon phases of the year. The site’s observatory is open on Tuesday, Friday, and Saturday nights from April through October. 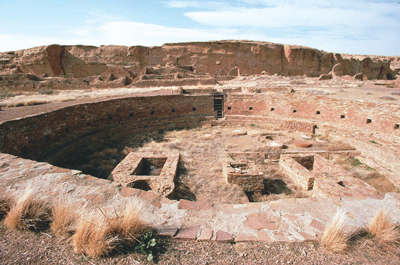 Pueblo descendants (modern Southwest Indians) say that Chaco was a special gathering place where many peoples and clans converged to share their ceremonies, traditions, and knowledge. As you explore the enormous stone ruins, you gain a greater appreciation for these ancient builders. Not only did they erect monumental public buildings, but they were also an accomplished people who built highly engineered roads, dams, canals, and irrigation systems.

Entrance is $4.00 for one individual or $8.00 per vehicle (includes all persons in the car). The Gallo Campground consists of 49 sites, on a first-come, first-served basis. No reservations. Each campsite has a picnic table and a fire pit with a grate. Camping fee is $10.00 per day. Reservations can be made in advance for two group campsites.