You are here: Home / Top Stories / 6 Cool Places To Watch Bat Outflights This Summer
This post may contain affiliate links or mention our own products, please check out our disclosure policy here.

Bats are one of the most misunderstood mammals.  They are the only mammals capable of true flight and are more maneuverable than birds.  Bats are a very beneficial group of animals; they pollinate flowers, control insects, and disperse seeds.

Nearly all the bat species found in the United States are insectivores, except for some flower-eating species that come in from Mexico. Bats reproduce slowly and are rapidly declining in numbers due to environmental factors, loss of habitat, hunting, guano mining, and new dangers such as wind farms. Currently, there are 77 bat species that are listed as endangered or critically endangered and over 100 additional species that are considered vulnerable.

Bats are nocturnal and spend their daytime sleeping in sheltered roosts to protect them from predators and the elements. Bats need different roosting conditions at different times of the year and will relocate to find a roost that meets their needs (i.e. raising young).  Roosts can be caves, mines, bridges, underpasses, hollow trees, or even in buildings.  Sometimes favorite roosts will house a number of bats or a colony.

Each evening, the bats emerge into the night sky in a spectacle known as an “outflight” which generally initiates at civil twilight and can last up to three hours, depending on the number of bats in the colony.  Watching the thousands of bats flying out of their roost in the twilight for a night of feeding on insects is a magical lifetime experience.

You should be very cautious around bat colonies that you do not stress them or introduce potential illnesses to their environments, such as the fungus that causes White Nose Syndrome.  It is better to view outflights in a controlled location to avoid inadvertently harming the bats.  Fortunately, there are some great places you can observe a bat outflight in the US.

Please note that evidence by bat researchers have shown that sounds and light from electronic devices (cell phones, cameras of any kind, computers, iPads, tablets, etc) can be detrimental to the flight navigation of bats—special photography permits may be required.  Here are some of our favorites.

The Orient Mine is the summer home to a bachelor colony of nearly 250,000 Mexican Free-Tail bats that spend the summer in this roost in the San Luis Valley. This is the largest bat colony in the state of Colorado.

The Orient Mine is an old iron mine that was active in the late 1800s-early 1900s.  The bats that live in the mine are now part of the chemical and pesticide-free agriculture practices in the San Luis Valley.

The mine, the Everson Ranch, the Valley View Hot Springs, and the old town of Orient are all part of the non-profit Orient Land Trust that was established to protect the 2,200 acres of land encompassing the area.  Ongoing tours and talks include the Bat Hikes as well as astronomy, geology, and wildlife hikes.

The Valley View Hot Springs is described as a “clothing-optional hippie hideaway where native fireflies float over naturally warm pools.”  They have 23 vehicle campsites with no hookups, dump stations, or use of generators. Reservations are highly recommended.

The largest known bat colony is northeast of downtown San Antonio in the Bracken Cave Preserve.  The cave serves as a maternity roost, where 15 million Mexican free-tailed bats roost and raise their young before the bulk of the colony hibernates or flies south to winter in Mexico.  This makes the Bracken Cave bats one of the largest concentrations of mammals on earth. 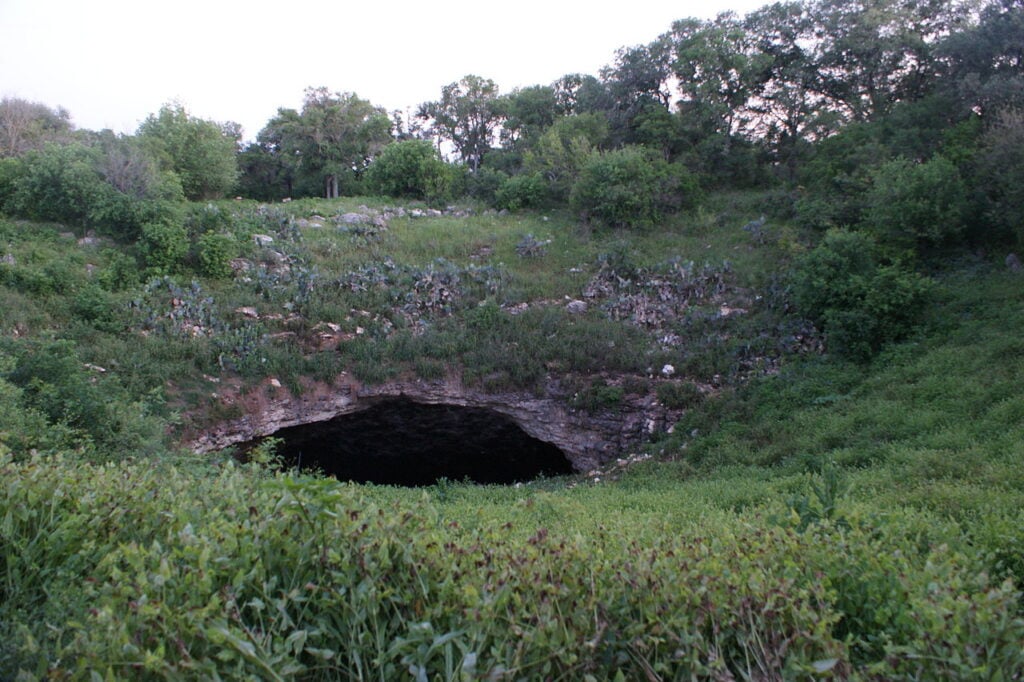 The entrance to Bracken Cave during daylight hours. (Photo by Daniel Spiess, Wikipedia)

The site is owned and managed by Bat Conservation International (BCI).  You must have a BCI membership and reservations to visit, but visitors will be treated to one of the most spectacular outflights in the world with only a few other visitors.

Located near the border between Wisconsin and Michigan’s Upper Peninsula, the Millie Mine is an abandoned iron mine that is home to a large breeding bat colony.

The 360-foot-deep opening to the mine shaft is protected by a bat grate—a special covering that allows resident bats to come and go, but keeps larger animals from falling in.  A self-guided interpretive program guides visitors through a short hike, and an observation deck uphill from the mine offers a fantastic view of the outflight during the summer and fall evenings.

Park your RV nearby at Rivers Bend Campground or Lake Antoine Park.

The Carlsbad Caverns were discovered around the turn of the 19th century when a cattle rancher saw bats swarming out of a hole in the ground.  Carlsbad Caverns National Park has a free bat flight program with an evening ranger talk at the Bat Flight Amphitheater each evening during the summer and fall months.

Thousands of Brazillian free-tailed bats emerge during sunset from the cavern’s entrance.  As a bonus, you can pair your bat viewing with a Night Sky Program to watch meteor showers or enjoy the full moon.

RV camping is not permitted inside the national park, but there are some great options nearby such as Carlsbad RV Park and Campground, and Buds Place RV Park.

This is a great chance to see bats fly from their roosts to hunt for insects over the nearby rice fields and wetlands of California’s Central Valley.  Many other species call the wildlife area home as well.

Camping is available just five minutes down the road at Sac West RV Park and Campground.

Outflights can be observed at Bat Cave in the El Calderon Area during the summer evenings.  Viewing outflights can be done on your own, or on some Saturdays, there will be a Ranger-guided tour starting one hour before sunset at the El Calderon parking area.  There are many inter-connected caves in the park that bats can use and many factors (such as weather) that may affect their activity, so be aware that the number of bats emerging can vary.

Stay nearby at Lavaland RV Park or at the Grants KOA.