You are here: Home / Blog / Being Prepared at Fort Flagler State Park
This post may contain affiliate links or mention our own products, please check out our disclosure policy here. 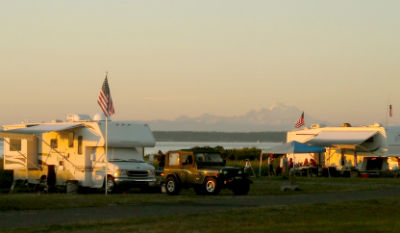 An early morning setting on our recent trip.

There are many reason to visit and experience Fort Flagler State Park. In fact, over the past few installments we have been revisiting a recent trip of mine along the northeastern section of Washington’s Olympic Peninsula.

I have shared my encounters of being stranded by on the world’s longest floating bridge, exploring historic mining operations, and finding little treasures along the way. This week I will share another experience at one of our favorite campgrounds and a few tips on how to be a better-prepared RVer.

My wife grew up camping at Fort Flagler State Park located on the northern tip of Marrowstone Island, just on the northeastern edge of the Olympic Peninsula. The 784-acre park boasts 19,100-feet of saltwater shoreline, remnants of a decommissioned coastal defense installation dating from the 19th century, wildlife, camping and shellfishing. It also consists of old concrete military bunkers set high on the bluffs overlooking Admiralty Inlet, century old military buildings and million dollar views over the water. It is one of the few places we return to over and over again with our RV. 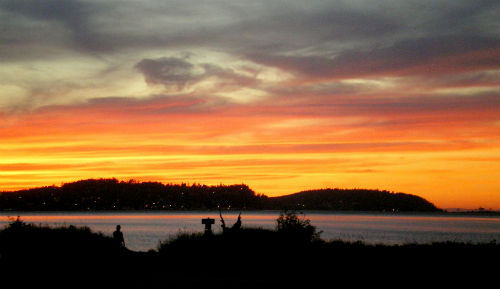 A sunset over Port Townsend.

Upon arriving for our latest stay, we were informed the park was experiencing problems with its electrical system and they were doing their best to get things back to normal. Now, those that follow this blog on a regular basis know that boondocking is our normal mode of camping so being without shore power impacts the way we use our RV very little. However, from what we witnessed from other RVers during a subsequent power failure demonstrated how many fellow RVers are not so well prepared. Let’s take a look at a few items others neglected.

Many RVers ran to get ice from the camp store or left the park in search of propane. Based on my years of being an RV dealer I can tell you one of two things were in play here: 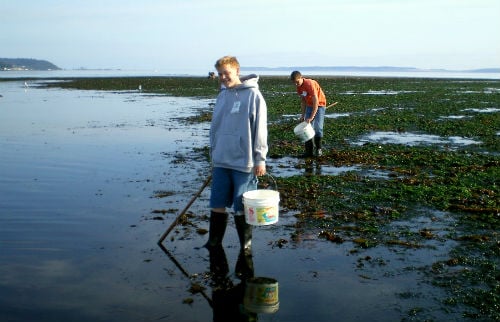 1) RVers came to the park expecting there to be electricity in their space to meet all their needs and did not fill their propane tanks prior to arriving. With no electricity to run their refrigerator and no propane as a back-up energy source, they were forced to go “old school” and buy ice.
2) Many RVers only camp where there are hook-ups and never dry camp. If their refrigerator quits operating on gas, many RVers don’t want to deal with the time or expense of having it repaired as long as it still works on electric. Thus, when the power failed they had no back-up.

The electrical failure also closed the restrooms for two reasons:

1) The sewer lagoon is up hill from the campground and requires electric pumps to get it there (portable toilets were brought into the park to remedy this problem). However, the dump station was also out of commission, so any RVers arriving with full tanks expecting to dump were also impacted.

2) The showers are coin operated and without power they won’t operate. While I didn’t witness the effects of the restroom closures, I can assure you there were RVers in the park that were lacking hot water due to the same two reasons listed above for their refrigerators. Lack of propane or only the electric side of their water heater was operating.

The Bottom line is RVers need to keep their rigs ready for self contained camping because you never know when you will need to do so. In other words follow the Scout motto and “Be Prepared”

This means keeping LP in the propane tanks, your appliances properly serviced and working on both gas and electric, batteries charged and in good condition and enough freshwater in the tank for at least a day’s worth of camping.

Even though we knew we had electrical service available every evening where we planned to camp, I still had our generator with us which proved fortuitous for us while waiting out the bridge closure.

Being prepared can keep you from experiencing a negative adventure in RVing!