You are here: Home / Top Stories / The Best Weapon To Survive A Bear Attack Isn’t What You Think It Is
This post may contain affiliate links or mention our own products, please check out our disclosure policy here.

Picture this: one minute you’re peacefully hiking on a beautiful wooded trail in the Northern Rockies, the next you’re fighting for your life when an angry bear charges.

If you had your weapon of choice, what would it be? Do you know the best weapon to survive a bear attack in the woods? Understanding basic facts about bear behavior and survival tactics can mean the difference between life and death. 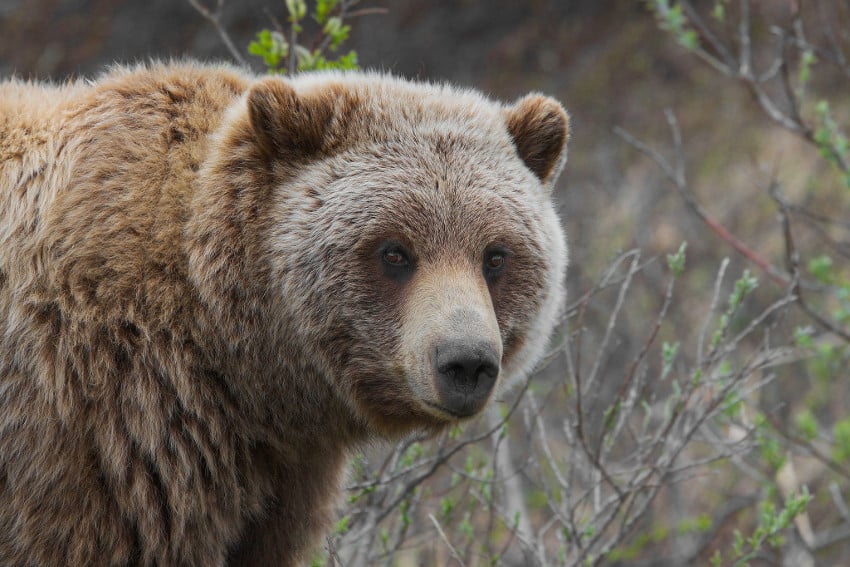 Brown, black or grizzly, you need to know how to stay safe in their territory. Image: Gregory “Slobirdr” Smith

More humans than ever are playing in remote bear habitat and greatly increasing the odds of a dangerous bear encounter. In June 2016, a grizzly bear killed a mountain biker near Glacier National Park and one week later, a backpacker was attacked in Denali. Some people might believe that these two could have been saved by a .44 Magnum but the facts prove otherwise.

Fact: Rifles and guns are statistically unlikely to stop a bear attack, but bear spray will. In fact, gun-toting hikers may even increase the odds of serious injury to themselves when attempting to use lethal force on an oncoming bear. 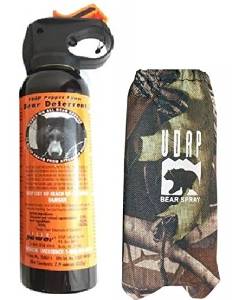 “Bear spray [has] a better success rate under a variety of situations … than firearms,” reports a 2012 Journal of Wildlife study entitled Efficacy of Firearms for Bear Deterrence in Alaska.

In addition, the authors go on to say that “We found no significant difference in success rates (i.e., success being when the bear was stopped in its aggressive behavior) associated with long guns (76 percent) and handguns (84 percent). Moreover, firearm bearers suffered the same injury rates in close encounters with bears whether they used their firearms or not.”

The study’s conclusion? Bear spray is a more effective weapon to survive a bear attack.

The other best weapon to stop a bear attack? Your brain

“Awareness of bear behavior is the key to mitigating potential danger,” says the US Fish and Wildlife Service in a “Bear Versus Bullets” report. Usually, human beings who disregard bear behavior facts are the cause of an attack.

When you avoid these behaviors and use your brain around bears, you increase the odds of staying safe when visiting bear habitat. Every wildlife lover needs to know these three important facts when encroaching on bear territory:

Be mindful when hiking near rivers and streams, in tall, grassy meadows or near berry bushes. All are preferred places for bears to eat and relax. When do they do it? Usually in early morning and late afternoon (but not always).

Usually, they stumble into it when searching for a meal. Use extreme care when cooking and storing edibles in the outdoors. Remember that RVs are like a giant lunchbox to bears. If your campground has bear-proof storage, use it. If you encounter an animal carcass on the trail, leave immediately as bears could be keeping watch on their next meal.

Bears give warning signals before attacking

These huge creatures don’t want to meet you, they just want to be left alone. If you get in their personal space, they’ll let you know it.

For example, bears stand up because they’re trying to smell you, not because an attack is imminent. If a bear looks you in the eye and has its ears pulled back, you are violating its space.

Whatever you do, don’t run. As anyone with a dog knows, many animals have a prey instinct and will give chase when something runs away from it. Instead, just back away slowly from the bear calmly, while keeping your hand on the bear spray canister.

Remember, bear attacks are still a rare event when you consider that more people than ever are camping, hiking, and visiting bear habitat. Be aware when you visit their home and you’ll have many opportunities to view these magnificent creatures from a safe (and far) distance.