You are here: Home / Columns / RV Golfer / Plan Your Next Trip To Charleston, South Carolina
This post may contain affiliate links or mention our own products, please check out our disclosure policy here.

Charleston, South Carolina is one of the most historical cities in the country with ties reaching back to the Civil War and American Revolution. Charleston, with roughly 130,000 residents, is located on the Eastern Seaboard, equal distance between Washington, D.C. and Miami. 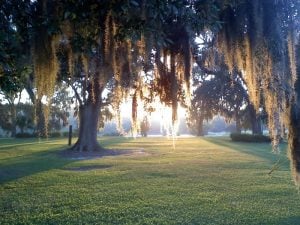 While exploring the many splendors of the Charleston area, a quality resort to park your rig is Oak Plantation Campground, one of the closest resorts to downtown Charleston just eight miles away.

Activities abound throughout Oak Plantation Campground. You can find an outdoor pool (not heated), a play area, disc golf, garden chess, and freshwater fishing in the resort lake with no license required. Nearby, you will find a Publix grocery store, along with various restaurants.

Charleston offers 20 courses in the area, with the closest to Oak Plantation the Links at Stono Ferry in nearby Hollywood. Offering much more than a links-style layout, the course opened in 1989 and was designed by Ron Garl. 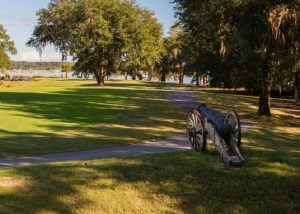 The popular par 72 championship course measures 6,756 yards from the tips. In addition to the stunning back nine, the course features a history lesson of sorts as this property was the site for a Revolutionary War battle in 1779.

Specifically holes 12, 13, and 14 were the exact location where the Battle of Stono Ferry took place, claiming nearly 300 casualties in the process.

That explains the redoubt–the earthen fortification–that’s still present on the 12th hole. The 18th, however, is a spectacular finishing hole. At just 343 yards, this is a short par four, but the stunning island green will definitely get your attention in more ways than one.

It’s easy to understand why Charleston is nicknamed the Holy City just by looking at the town’s skyline that’s dotted with numerous steeples.

Featuring more than 400 places of worship of different denominations, many of these picturesque pinnacles are flanked by the ever-present palmetto trees with their fan-like evergreen fronds. Here are a few more facts about Charleston.

• Spread over 128 square miles, the heart of city is located on Charleston Harbor, an inlet of the Atlantic Ocean formed by the confluence of the Ashley and Cooper Rivers, which also come into play on a few of the area golf courses.

• In 1743, Charleston merchant David Deas received a shipment of 432 golf ball and ninety-six clubs from Scotland. This led to the first organized golf played in America on pastureland near the corner of Pitt and Bull Streets. Golf enthusiasts in Charleston organized the South Carolina Golf Club on Sept. 29, 1786.

• The first official battle of the Civil War occurred at Fort Sumter in the Charleston harbor on April 12, 1861. Today, Fort Sumter is a National Monument and tours are available.

• Charleston established its first baseball team—the Sea Gulls—in 1886. In 2017, the Charleston RiverDogs were the local minor league baseball team, and an affiliate of the New York Yankees. “Caddyshack” actor Bill Murray is part-owner and “Director of Fun” for the RiverDogs. 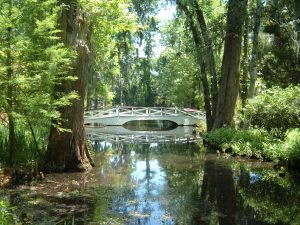 Set on 464 acres on the picturesque Ashley River, the property has seven bridges and a variety of themed gardens. Tours available include a guided overview of the plantation house, various garden tours, a nature train tour, as well as a rice field boat tour; Magnolia was originally a rice plantation.

A final note: Charleston is a great city to explore on foot. However, parking in the downtown area can be challenging at times. There are many attractions and activities in greater Charleston, and exploring them is easy any time of year.

For more information about the area, visit CharlestonCBV.com. You can also read more about other golf courses in the area on CharlestonGolfGuide.com, and find local campgrounds on Campground Reviews.

Rick Stedman is an avid golfer, RVer, and writer who lives in Olympia, Washington. Rick writes a weekly golf blog, The 19th Hole, for RV Life. You can reach him at rstedman@gmail.com.