You are here: Home / Great RVing Destinations / Explore This Historic Site Along Interstate 10
This post may contain affiliate links or mention our own products, please check out our disclosure policy here.

by Dave Helgeson
January 2, 2020Filed under:

In our previous entries, we have been exploring forgotten sites along California’s Interstate 10 in the Mojave Desert. If you love touching history and walking in the footsteps of those who made it, you will also want to be aware that I-10 cuts right through portions of General Patton’s WWII Desert Training Center.

The following is a brief overview condensed from a BLM (Bureau of Land Management) brochure:

“By the fall of 1941, the world had been at war for two years. Nazi forces occupied most of Europe, and in North Africa, German troops threatened to capture the critical Suez Canal. Later that year, Japanese pilots attacked the U.S. naval base at Pearl Harbor. Congress declared war on Japan. British Prime Minister Winston Churchill urged President Franklin D. Roosevelt to send the U.S. Army to support Allied troops in North Africa. However, America’s soldiers were not prepared for combat in the deserts of North Africa.

In February 1942, the U.S. Army assigned General George S. Patton Jr. to advance desert tank warfare and train U.S. soldiers for combat under the harshest desert conditions possible. In early March General Patton and his staff surveyed the southwestern United States and established the boundary of the Desert Training Center. It encompassed 18,000 square miles of rugged, desolate and largely uninhabited lands within the Mojave and Colorado Deserts in California, Arizona, and Southern Nevada.

He established auxiliary camps that provided logistical support for the divisional camps, including hospitals, medical units and supply depots, and arranged communication logistics with local and regional telephone companies. Patton located the camps near major roads such as Route 66 and railroad communities to transport troops, equipment.

With the surrender of Germany, the U.S. Army decommissioned the Desert Training Center in April 1944, ending the largest simulated operations in the history of military maneuvers.

In January 1947, the U.S. Army returned most of the withdrawn lands to the Department of the Interior, the majority now managed by the Bureau of Land Management (BLM).”

As noted above, the Desert Training Center occupied a huge swath of land, but luckily for those traveling I-10, much activity took place just south of Joshua Tree National Park which is accessed via I-10.

Here are a couple of historic markers you may want to visit during your travels through the area: 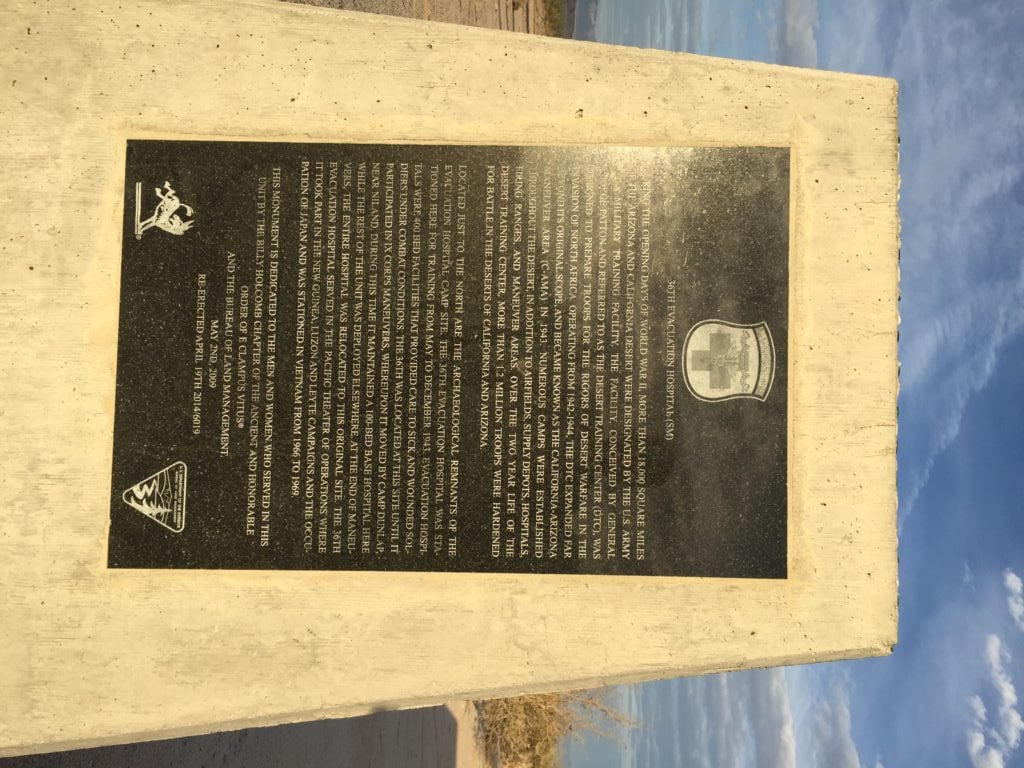 While visiting these markers, be sure to spend a few minutes exploring the surrounding desert where you are likely to find items discarded during training, remains of roads and hardware from buildings.

This is a great website to read more about the Desert Training Center along with many photos.

If you like to experience history in a museum rather than kicking around in the desert where it happened, you might enjoy a visit to the General Patton Museum where there is a dedicated exhibit to the Desert Training Center. The museum is located off Exit 173 at 62-510 Chiriaco Road, Chiriaco Summit, CA 92201 Click here to learn more. 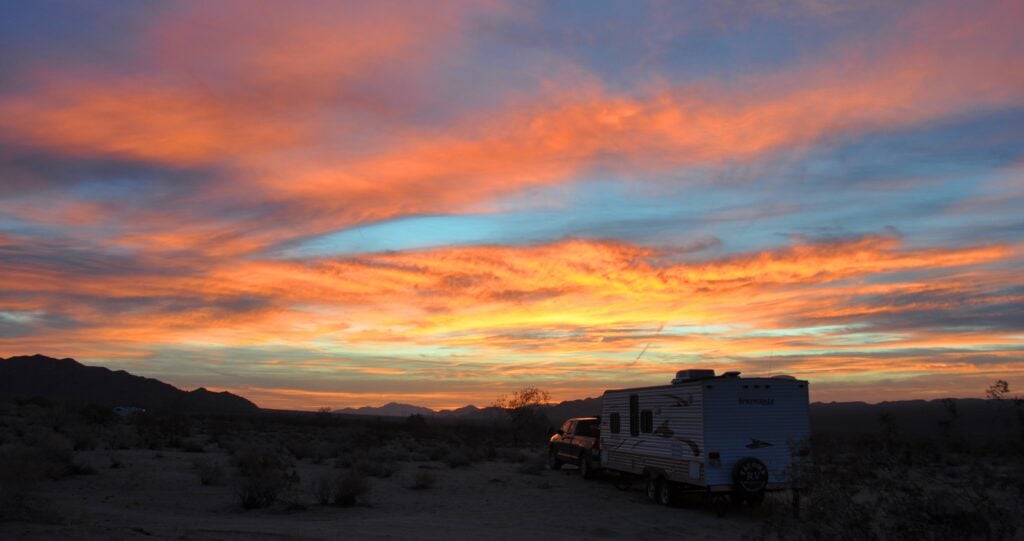 BLM allows dispersed camping (boondocking) over most of the land it administers, and there are some nice easy-to-access boondocking sites (pictured above) between I-10 and the entrance to Joshua Tree National Park along both sides of Cottonwood Springs Road. Click here for a complete listing of camping options outside of the park including the boondocking sites mentioned.

Visiting the training grounds of those who served, just another adventure in RVing!

Read our previous articles on the ghost town of Desert Center, California and the nearby abandoned town of Eagle Mountain.