You are here: Home / Blog / If You Like Arnold Palmer Tea, You’re Going To Love John Daly’s New Drink
This post may contain affiliate links or mention our own products, please check out our disclosure policy here.

Professional golfer John Daly has added another chapter to his moniker “grip it and rip it,” which made him a fan favorite for his long driving skills. He now fronts a new product: John Daly’s Grip it & Sip it.

Unconventional in most everything he does, Daly is one of the few professional golfers to drive an RV to tournaments. He owns a 45-foot-long, 2007 Prevost Featherlite.

His latest venture of touting Grip it & Sip it is a take-off of the Arnold Palmer drink that most golfers are familiar with. The Arnold Palmer contains iced tea and lemonade while the alcoholic version of that drink was called the John Daly and generally included a shot of vodka. 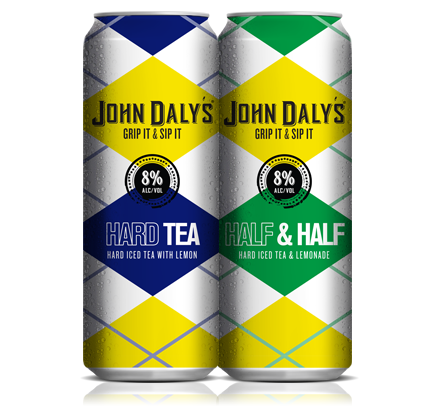 Finally legitimizing the John Daly drink, Daly partnered with Phusion Projects to release a line of drinks based on the classic cocktail bearing his name.

John Daly’s Grip it & Sip it is offered in two flavors: Hard Tea and Half & Half, which are made with real black tea and premium ingredients.

Available in ready-to-drink 16 oz. cans with 8% alcohol, this line of refreshing beverages offers an extra punch for those looking to kick it up a notch.

For Daly, collaborating with Phusion Projects to bring this drink to market was an easy decision.

“It was time to bring legitimacy to the John Daly cocktail. I wanted it to be an accurate representation of who I am. Phusion embodies the carefree and fun attitude that I do, so we got it right with this new line of John Daly’s.”

According to Phusion Brand Manager Kaitlin Lang, “While the name initially draws golf fans, John Daly’s drink appeals to those on and off the golf course. In the past year, the demand for hard tea and half & half flavor profiles has experienced double digit growth.”

With hard tea in a can remaining a relatively untapped category, Phusion and Daly saw an opportunity to enter the market with a premium product that embodies the golfer’s appealing personality. For more information about these new products, visit JohnDalys.com.