You are here: Home / Departments / RV Books / Follow The Adventures Of Maxie McNabb In This Book Series
This post may contain affiliate links or mention our own products, please check out our disclosure policy here.

Maxie McNabb is a woman with moxie.  She is the kind of person who makes wherever she is home, has wisdom and savvy, and feels easy to be around.  Maxie is a spirited 60-something retired widow and amateur sleuth who travels part-time in her Winnebago with her mini-dachshund, Stretch.

Although she has a home in Homer, Alaska, in recent years Maxie has discovered the joys of RVing to visit parts of the country she now has time to visit.  Like many of us, Maxie craves the freedom of the road and enjoys her solo travels across the country to visit friends, meet new people, and see the sights.

You can travel along with Maxie and Stretch on their adventures.  Maxie and Stretch are fictitious characters created in the fertile mind of Alaskan author Sue Henry and are featured in one of Henry’s book series of light mystery/thriller novels. 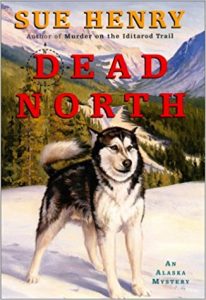 Sue Henry has called Alaska home since the 1970s and has a number of novels that she has written over the years in her spare time while teaching writing at the University of Alaska, Anchorage.  Henry is known as a writer that gives fantastic and accurate descriptions of the areas and cultures where her stories take place.  It is important to Henry to get the details correct for her stories.

When one of her characters in a previous book series drove the Alaska Highway in an RV, Henry bought herself an RV and spent months driving the Alaska Highway to do research for the story.  She spent 3 weeks driving each direction, exploring side routes, and visiting with other travelers along the way.

These experiences gave her a greater depth of writing for her character and the journey she takes during the storyline.  Sue Henry states in a 2001 interview:

“As I sat beside a campfire and watched a rising full moon paint a path of glittering gold across the waters of Kluane Lake, I was reminded that the spirit of the Klondike Gold Rush still lingers in that part of the country, which includes Dawson City, Whitehorse, and Skagway. Though anxious to finish the trip and return to my computer, I honestly couldn’t decide which was more appealing: traveling to do research for Dead North, or writing it and providing actual and armchair travelers with a sample of what the Alaska Highway has in store.”

This dedication to accurate travel detail is evident in all of Henry’s books.

We are first introduced to Maxie McNabb in Dead North when dog musher Jessie Arnold (from Henry’s first book series) agrees to drive a friend’s Winnebago back from Idaho after a fire destroys her home and meets Maxie on the Alaska Highway.  Maxie’s follow-on book series adventures start in Colorado with The Serpents Trail, where she helps a dying friend in western Colorado whose home was burgled. 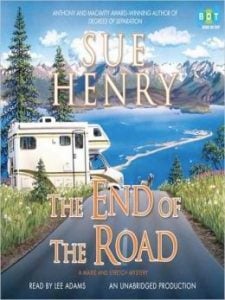 In The Tooth of Time, Maxie and Stretch are visiting Taos, New Mexico where she explores the secrets of the area in search of answers in the mysterious death of a woman with a troubled past infused with con men.

In The Refuge, Maxie flies to Hawaii to help an injured friend pack up her house to move back to Alaska.  Maxie decides to rent an RV and tour the island, but as they travel to a park called the Refuge, prowlers, sabotage, and stalkers present a mystery that must be untangled.

In the latest of the series, The End of the Road, Maxie and Stretch are back in their home in Homer, Alaska, where they help to solve the apparent suicide of a lonely tourist that they befriended at a local inn.

Sue Henry’s books are reminiscent to authors like Tony Hillerman, JA Jance, Dana Stabenow, Mary Jane Clark, and Nevada Barr.  Consider getting the audio book versions to listen to while you are driving!