You are here: Home / Maintenance, Modifications and Repairs / New Washer/Dryer Vent Installation
This post may contain affiliate links or mention our own products, please check out our disclosure policy here.

It’s funny how things just begin to degrade for no reason take for example the replacement dryer vent that we installed last year degraded to the point where the material that it was made from dissolved in the South Carolina sun.

I happened to have noticed one day that one of the vanes on the dryer vent was broken and yet another was missing altogether. On further examination I saw where 3 corners of the vent grill were cracked. I tried to place my hand on the plastic however it has degraded so badly that as soon as I it was touched, it collapsed on the bottom and I put my finger through the frame near the top..

Boy was I pissed. How does a company make a dryer vent that is allegedly rated for outdoor use only for it to last only 1 year? This is one situation if left unresolved that rain and other outside conditions could present a lot of problems to our coach and I wasn’t going to have that. So obviously I had to seek a solution that would repair this issue once and for all. In my travels I have seen few styles of dryer vent and the one that most appealed to me was the single piece chrome plated vent.

This is one project that I was not looking forward to to doing for a number of reasons. First and foremost the washing machine has to be moved and it’s a heavy piece to handle all by oneself. My W/D is mounted about 14 inches up off the deck and the way that I have been able to get it out of the enclosure is with the assistance of a milk crate. To prep the removal, I have to remove the doors, unplug the unit, and disconnect the fill hoses from the hot and cold water feeds.

You can see how much the vent degraded due to the South Carolina sun but I expect that it should have lasted for more than a year. You can see the holes in the frame where my fingers pushed through and the cracked corners.

The process of removal is to lift and pull the front of the unit to clear the shelf trim and then to walk it out a little at a time. Let me tell you there isn’t anywhere hardly to grab the washer so it’s a bit difficult to get it started. Once you can get the front of the unit out of the enclosure you can grab it a lot better. Continuing the removal, it’s far enough out at this point so that I can now lean the unit forward and place the weight onto the milk crate. A final lift and a slide forward allows the unit to rest on the milk crate. Now I have to pull the unit forward to give me a little working room so I have to get down on the floor and pull the milk crate away from the cabinet.

Now I can work behind the unit. On close examination I noticed that the vent adapter that was installed some 8 or more years ago was not positioned properly and that they had to someway cut the discharge hose adapter pipe at an angle so the W/D would fit back in the enclosure. Well that did work but what a hack job they did. For the lack of measuring the height and depth of the dryer in the enclosure the dealer drilled the hole in the wrong location. If the hole through the coach were some 3 inches higher it would have been a lot better of an install. They used a ton of caulking on the dryer vent to get it to stick in the hole I expect and pulling the old vent pipe out wasn’t easy. On the outside of the unit pulling the 4 corner screws out of the vent was easy and then all I had to do was remove the vent fragments. There was a ¼” thick sheet caulk type of material that I had to removed from between the side wall and the vent. Once that was removed, the only thing remaining was the large hole and some previous or unused holes in the sidewall from the old grill assemblies.

Installing the new vent kit begins with fitting the exhaust pipe adapter. This piece is about 3.5” in diameter and has a circular weighted flap that covers the opening. When I fitted the new hose adapter I found out that the hole was ½” too big. The hole looked to be about 4 inches. I’m scratching my head, how am I going to get this thing to fit? Well luckily the outside flange of the adapter was able to lie flat on the sidewall and through the 4 holes provided I saw solid sidewall.

Not wanting to repeat the previous boo-boo and being stuck with the location that I had, I measured everything and I saw that the new piece was going to fit since the adapter pipe was only about 4 inches deep rather than the previous pipe which was much deeper. I committed to securing the adapter as high and centered at the top of the hole as possible. I sunk 4 screws into the sidewall through the flange to secure the adapter plate. Once that was done, I put a bead of silicone all around the plate. Now that the adapter was mounted, what was I going to do with the gap around the opening. I asked myself, what would Mike Holmes do? That’s right .. spray in the foam filler.

I went to Lowes and rather than getting the hi-expansion stuff I got the low-expansion stuff which cost more and I used that. You have to use gloves with this product, it’s brutal. I sprayed the sealant all around the opening and stood back. The product began to expand somewhat and it rolled out from the hole and solidified in a few hours. Best thing here is the hole is sealed, no water or outside weather can get in and the foam itself has now become part of what’s holding the adapter. 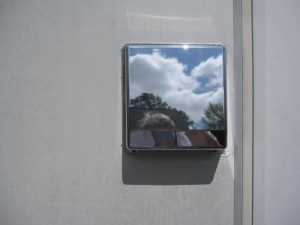 This vent is really better looking in person. I caulked over the holes on the bottom of the opening and it’s hard to see them from the driver’s seat!

A piece of 4” flexible conduit about 30” long is provided. I used a 4 inch clamp provided and slipped on the hose and tightened same. OK, so now I have an adapter and a short hose. How does that plug into the back of the dryer? Well it doesn’t have to. On the back of a Splendid washer the discharge duct hose is about 3 inches wide and it’s made of a flexible heavy gauge aluminum. This hose actually is secured to a flange on the back of the washer. 2 screws have to be removed at 6 and 12 o’clock. The adapter is internally threaded. What you do is hold the hose in one hand and while screwing counter-clockwise the adapter will screw right onto the hose and hold it tight. Restore the adapter and hose assembly to the back of the unit.

I took the free open end of the 3 inch hose and placed inside the 4 inch hose and taped the joint with A/C duct foil tape and wrapped a 3” piece of gorilla tape on top of that. Before I restored the W/D to the cabinet, I thought is a good idea to run the dryer to check for flow. I cycled the dryer ON and went outside. I reached up and felt a good flow of air coming out of the vent opening. Coming back inside I secured the dryer operation and began restoring the W/D back inside the cabinet. Man what a job it was getting that thing back in the hole. It’s heavier than I remember but I got it. It wasn’t anything that a few Advil couldn’t take care of.

I connected the supply hoses and restored the doors on the cabinet and the now almost 10 year old Splendid was none the worse for the wear. I went outside and got the chrome vent cover and slipped in down vertically from the top on the adapter plate. 2 holes were required below to hold the cover on so those were pushed with an awl into the sidewall and 2 stainless #8 screws were used to hold the cover. The install was solid, but to look at it there were still 3 holes in the side wall below the vent so I filled those in with white Dicor, non-leveling white caulk. I wanted to finish the weather proofing so I used a clear outside rated, sun resistant silicone caulk and laid a bead all around the chrome vent cover. Finished!

We went to the North Carolina State WIT Rally this weekend on the beach and the good News is that the vent didn’t fall off. So there you have it.