You are here: Home / Great RVing Destinations / 9 Things You May Not Know About Red Rocks Amphitheatre
This post may contain affiliate links or mention our own products, please check out our disclosure policy here.

Red Rocks Amphitheatre is a unique outdoor venue located in Morrison, Colorado (about 15 miles west of Denver). Red Rocks has hosted multitudes of world-class concerts where musicians take advantage of the natural acoustics from the surrounding rock formations. 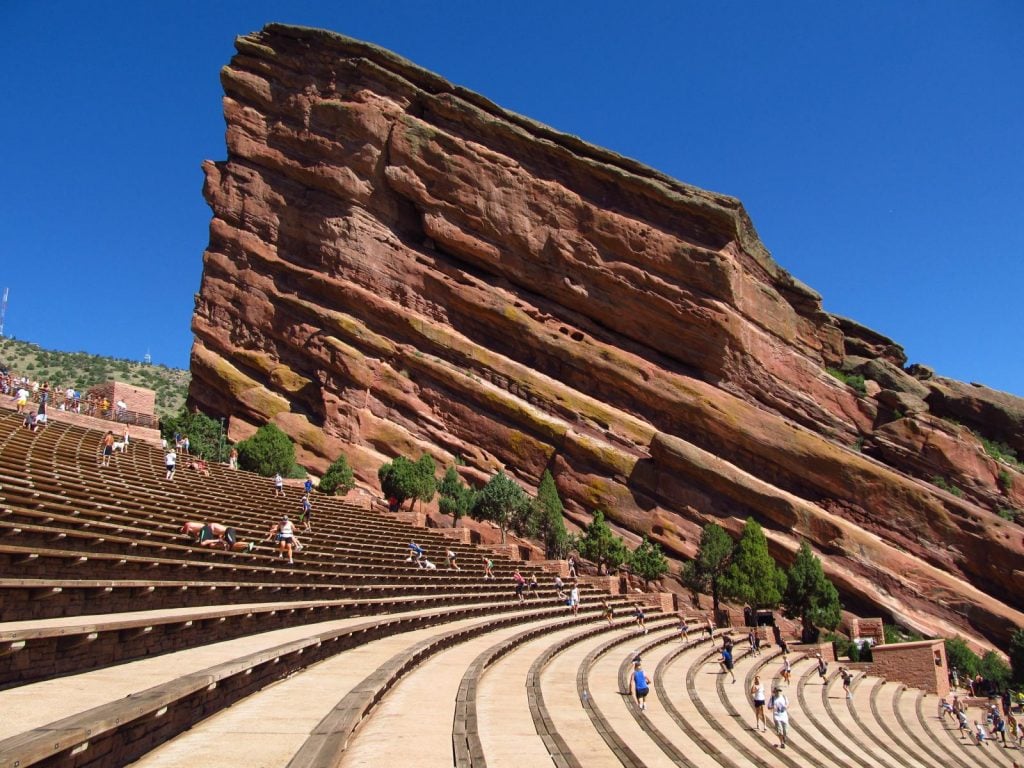 The Beatles, Nat King Cole, U2, Jimi Hendrix, Radiohead, The Grateful Dead, Jethro Tull, John Denver, and more have performed at the venue over the years, making it one of the most well-known venues in the US. 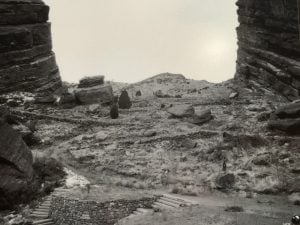 Historic photo of Red Rocks before construction, circa 1930. (Photo via Colorado History Museum)

1. The first concert held at Red Rocks was in 1906, hosted by John Walker, the visionary behind creating Red Rocks Amphitheatre.

Pietro Satriano and his 25-piece brass band played the first show. Walker eventually sold the venue to the City of Denver, and work began to build the open area park and amphitheater from Walker’s initial dream. The amphitheater was officially opened in 1941.

2. Surrounding the amphitheater are over 860 acres of open space including hiking and biking trails, the Trading Post, visitor center, and a restaurant called the Ship Rock Grille.

The Red Rocks Trail is a 6-mile loop through the rock formations with access to amazing scenic vistas. Access to the open space park is free and open year-round from sunrise to sunset.  The amphitheater is closed to the public during concerts and events.

3. The spectacular red rock formations that make up Red Rocks are from the Fountain Formation, left behind by ancient river deposits.

These sediments were deposited between 340 and 290 million years ago.  Many fossils can be found in different beds of the formations including plants, brachiopods, crinoids, and gastropods.

The reddish color is due to oxidized iron minerals, creating a “rust” hue.  The rocks were deposited flat, then much later were thrust up into their tilted angles during the uplift that created the present Rocky Mountains.  Some of the formations are nearly vertical, while others dip at less dramatic angles.

4. The Trading Post dates back to 1931 and was originally known as the Pueblo. Today the Trading Post sells unique Red Rocks souvenirs and memorabilia.

The views from the Trading Post are amazing.  The backyard area can be rented for weddings or summer events.

5. The Colorado Music Hall of Fame is housed at the Trading Post at Red Rocks.

Exhibits and artifacts encompassing the state’s musical history are open to the public to browse.

6. Following a riot during a 1971 Jethro Tull concert where tear gas had to be used to control the rowdy crowds, Denver Mayor William McNichols banned rock music at the amphitheater. 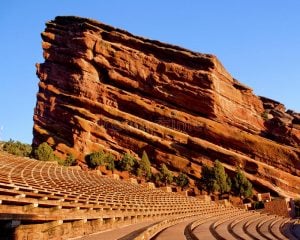 When not in use, the venue makes for a brisk workout routine.

7. Many people take advantage of the amphitheater during non-event times as a fitness venue.

At an elevation of 6,000 feet, the venue includes two staircases on each side of the seating area, each with about 380 vertical steps to climb.

With the 69 rows of bleacher seats, a serpentine route through the bleachers equates to approximately 3 miles of ascent or descent.

8. During anniversary events commemorating the 9/11 tragedy, firefighters, EMTs, flight crews, and supporters do nine complete rounds of stair climbing to reflect the 110 stories of stairs climbed by emergency crews on September 11, 2001.

9. During the summer, usually on a Monday or Tuesday, Red Rocks features its Film on the Rocks series, showing favorite movies preceded by a live local concert or comedian.

This is a fantastic, affordable, family-friendly way to experience local talent and enjoy a favorite movie.

Although there is no camping within the Red Rocks park area, the park is a short distance from great campgrounds at either Bear Creek Lake Park or near Golden.

You may also like: 3 Great Music Destinations In The East For RVers