You are here: Home / New RV Products and Gear / Starlink Internet: What Is It And How RVers Benefit
This post may contain affiliate links or mention our own products, please check out our disclosure policy here.

by Levi Henley
March 24, 2021April 11, 2022Filed under:
Table of Contents show
What to Do When You Need Internet While RVing
Starlink Internet: What Is It and How RVers Benefit
Lower Orbit
Latency
Self-removing space junk
More bandwidth and speed
Does Starlink for RVers Have Data Caps?
The hardware
Starlink internet cost
What does this mean for RVers?
The future of Starlink
The Downside of Starlink Internet for RVers 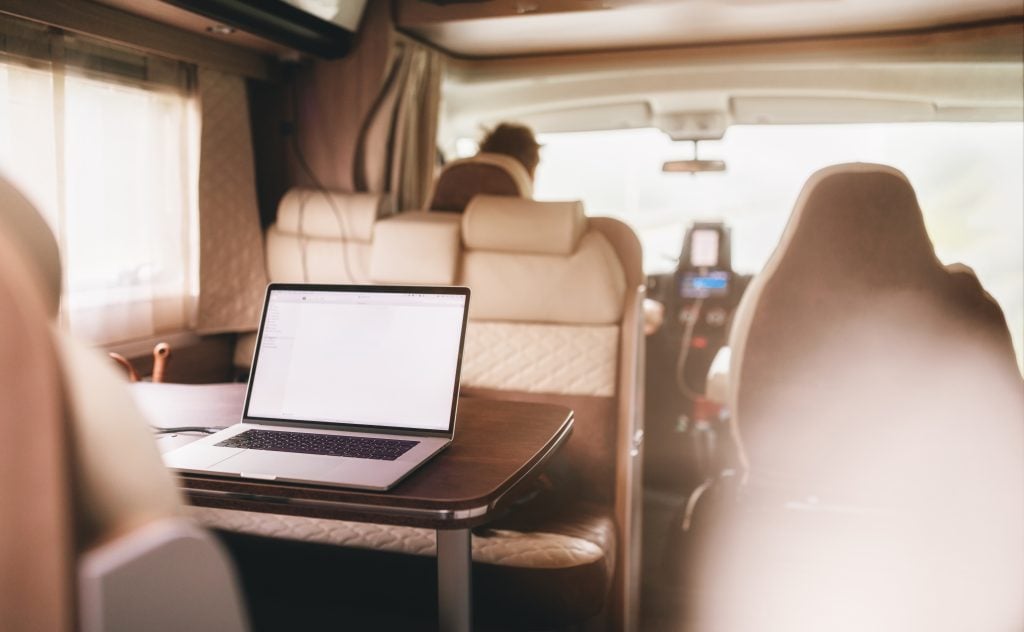 What to Do When You Need Internet While RVing

Along with making Starlink internet a reality, Elon Musk’s company SpaceX has accomplished some pretty neat things in recent years. It developed the technology to reuse the first stage of rockets allowing for cheaper space flight. SpaceX also sent astronauts to the International Space Station from American soil for the first time in years.

If you have never seen a SpaceX rocket re-enter the Earth’s atmosphere and land perfectly upright on a drone ship, then you don’t know what you’re missing. The video below shows the two side boosters of the SpaceX Falcon Heavy landing. It’s 4 minutes of crazy good engineering gold.

Starlink Internet: What Is It and How RVers Benefit

With cheaper space flight comes cheaper satellite launches. Starlink internet was announced by SpaceX in 2015 and would not be given the name Starlink until 2017. The idea was to have a constellation of many small satellites in low Earth orbit to provide global broadband internet.

Satellite internet isn’t new. But it has a reputation of being slow and prohibitively expensive, especially for RVers. Starlink internet, however, is quite different from traditional satellite internet in several ways.

Starlink internet satellites are in a lower orbital plane than current satellites used for the internet. In other words, they are closer to the earth by quite a bit.

Traditional geostationary communication satellites are located about 22,000 miles above the Earth, while Starlink internet satellites sit at about 340 miles. The satellites’ lower orbit provides two advantages. The first one is decreased latency.

Latency is the time it takes to get a response. Imagine typing RVLife.com into your browser. You hit the Enter key and what happens?

It takes time for all of those waves of light to travel 90,000 miles plus. On average, that time is about 550 to 650 milliseconds. Less than a second doesn’t sound that long, and to be honest, for basic browsing and email, 550 milliseconds is good enough. Consider, though, the higher price you are paying for satellite when cheaper ground-based internet is typically less than 100 milliseconds.

Many games like online first-person shooters are unplayable with a latency of over 100 milliseconds. Gamers are not typically associated with RVers. However, more gamers are entering the RV world as the Nintendo generation approaches their 40s. So it is getting to the point that being able to get a little gaming time in while camping is a luxury that many RVers will want to have. Other than games, latency can have negative impacts on streaming and things like video calls. 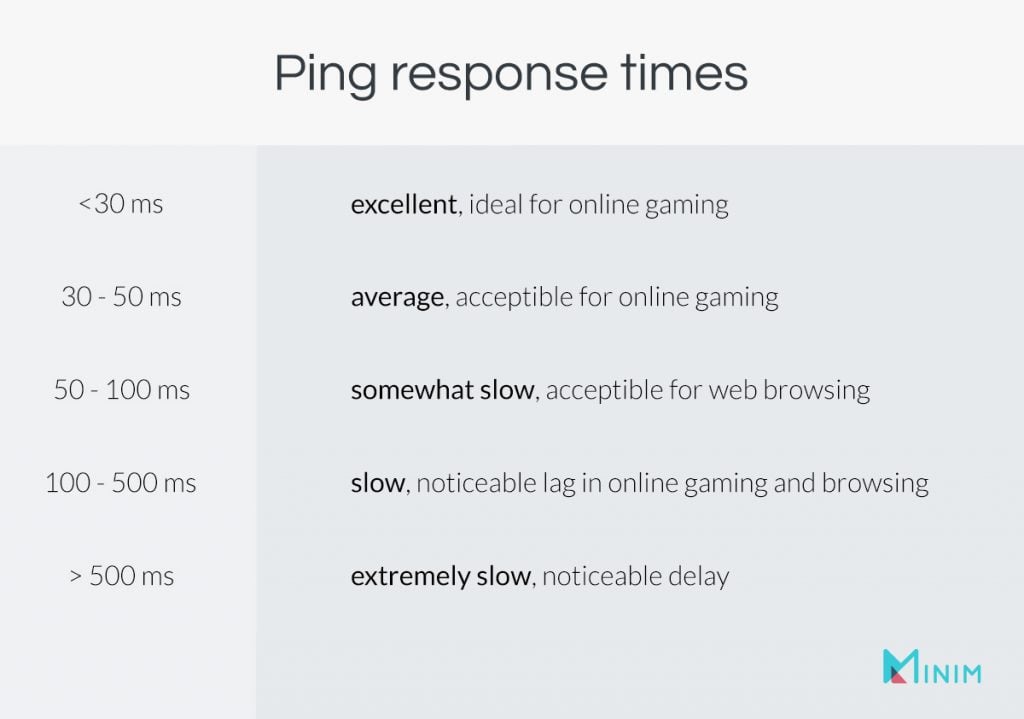 This handy chart from minim.com shows how the user experience is affected by latency.

Since Starlink internet satellites are only about 340 miles above the Earth, they have much lower latency. In addition to being closer, each satellite is equipped with lasers to send information to neighboring Starlink satellites, resulting in quicker response times.

As more Starlink satellites are brought online, it will only improve. On February 22nd, 2021, Elon Musk said, “…latency will drop to ~20ms later this year.”

For a very detailed explanation of how Starlink internet accomplishes its low latency, check out the video below.

This may not be a huge deal to many in the RV community at this moment in time. Still, space junk is an issue, especially if we want to continue to send missions to space. There is already a lot of space debris posing problems for working satellites, the space station, and other missions.

Starlink internet is attempting to tackle this problem by using an ion engine on the satellite to automatically avoid colliding with existing space junk and deorbit the satellites at the end of their life. Most of the satellite burns up upon reentry of the earth’s atmosphere. 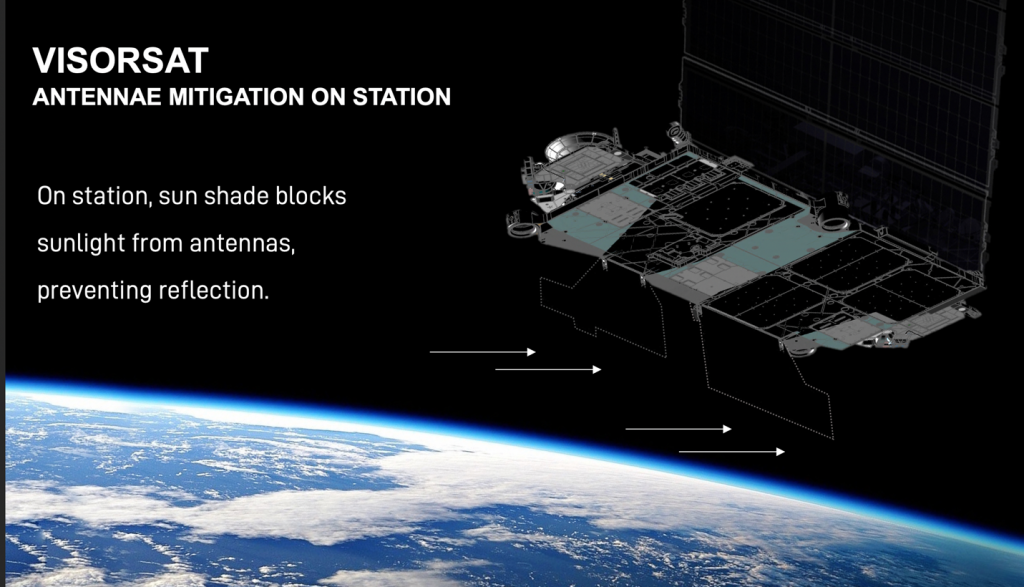 This illustration from SpaceX depicts some of the tech employed to reduce satellite visibility from the ground.

Starlink is also making efforts to keep its satellites as dark as possible so they don’t interfere with Earth-based astronomy. There are several things they are attempting to prevent them from being seen and reducing their brightness, such as sun shades.

Think of the internet service as a pipe. The bandwidth is a measurement of the size of the pipe. The pipe can only carry as much water as it can physically fit at one time. If you try pushing more than that, you are just going to have to wait until there is room.

All internet services are the same way. They can only handle so much data at once. If you have many people trying to do things at once, someone will have to wait. That is why RVers who want to try out satellite internet when they are boondocking are hit with data caps and slower speeds.

Does Starlink for RVers Have Data Caps?

A data cap is a limit to how much data you are allowed to transfer in a month before your speeds are significantly reduced or you get charged. Data caps are put in place because there is a limited amount of bandwidth available in the network. Companies put data caps in place to force users to be conscious about how much data they are using. That way, one person can’t hog up all the bandwidth.

Available bandwidth and latency work together to keep traditional satellite internet speed to between 25Mbps and 100Mbps. Some users experience slower speeds than that at times. While this is within the speeds needed for gaming and streaming for one person, the modern-day camping family may require more than that. 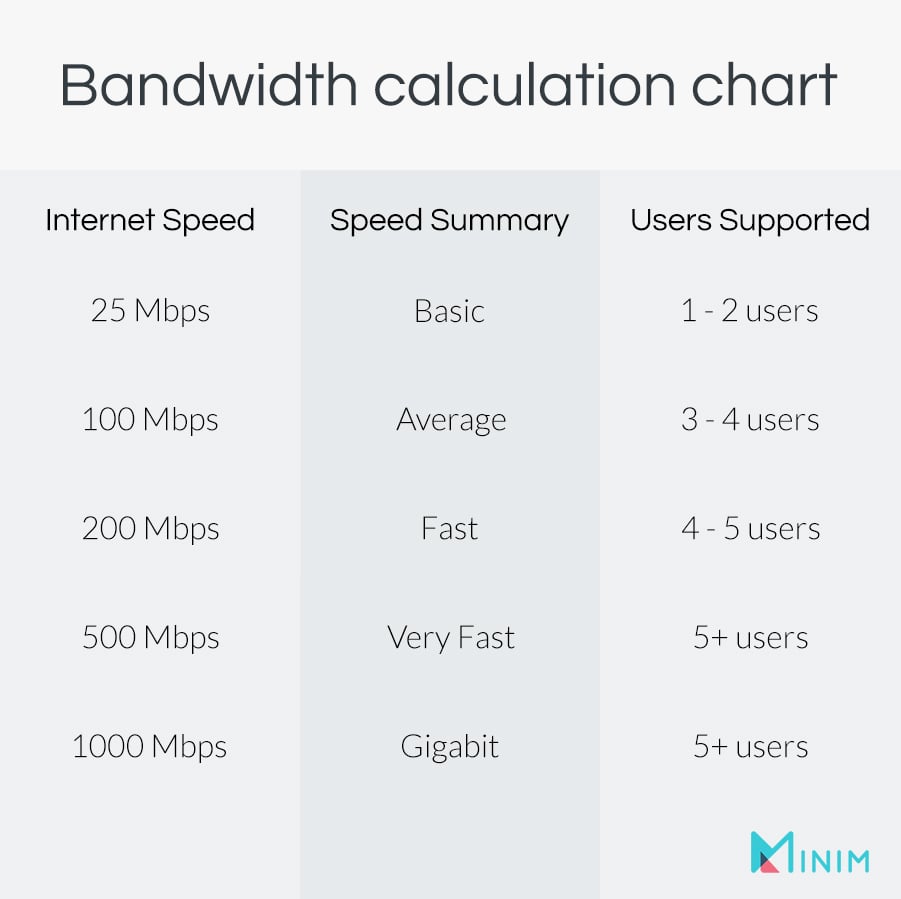 As you can see from the chart above from Minim, even the 25Mbps residential satellite internet doesn’t have the bandwidth to support the average RVing family.

Users of the service are already experiencing speeds of over 100-150Mbps. In the same tweet referred to earlier, Elon Musk said, “Speed will double to ~300Mb/s in 2021.” At this time, Starlink internet does not have data caps either. So you are free to use as much data as you please. 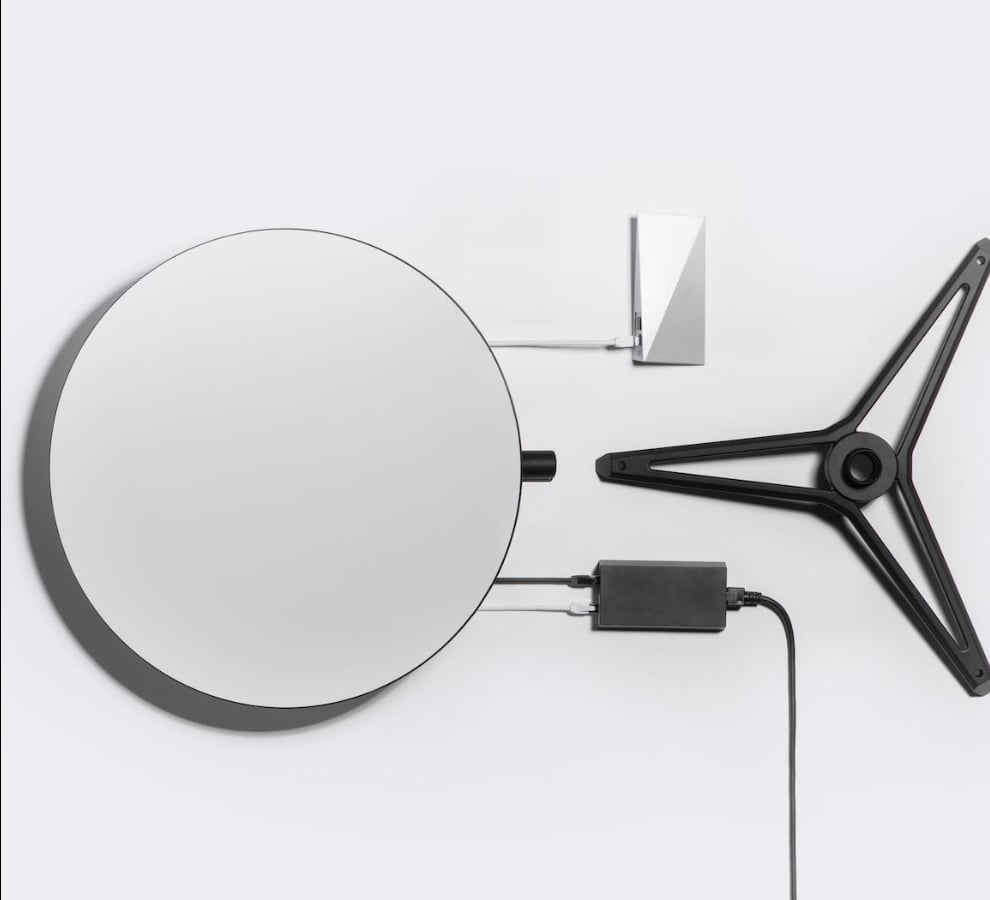 Starlink comes with the dish, router, and wires needed to set it up right out of the box. A handy app walks you through the process of getting it all setup.

Right now, the Starlink internet beta testing phase requires users to purchase the hardware for $499, and the service itself costs $99 a month. That’s not bad considering residential satellite plans charge up to $150 a month for unlimited internet up to 25Mbps. Current mobile RV satellite internet services cost upwards of $400 a month for their 2Mbps plan.

What does this mean for RVers?

I know what you’re thinking. Can RVers get this decently-priced, high speed, low latency, satellite internet with them on the road? The answer is yes! Well, no. Not yet, but maybe soon!

Starlink internet is not mobile yet. Or to quote their FAQ page,

“Can I travel with Starlink, or move it to a different address? Starlink satellites are scheduled to send the internet down to all users within a designated area on the ground. This designated area is referred to as a cell.

In other words, Starlink internet is only mobile in your immediate area. When you sign up for service, your dish is given the information to connect with the best satellites for your address or location.

Every Starlink dish in that area/cell will connect to those satellites. As long as you remain in that cell, you can connect. So you may be able to take your dish on a camping trip close to your house as long as the area happens to be in the same cell as your service address.

The future of Starlink

So why devote the effort to talk about it in an RV LIFE article? Because Starlink internet knows RVers are keeping a hopeful eye on it.

Like any business, they know that RVs, trucks, boats, and planes are a prime revenue stream. A Camper Report article added an update about how Starlink recently filed with the FCC seeking a blanket license authorizing its ESIMs or Earth Stations in Motion operation.

Unlike their current offering intended to be stationary, the ESIMs, though electrically identical to its current earth systems, will be mounted to moving vehicles such as boats, planes, trucks, and yes, RVs too.

Starlink internet will allow their vehicle-mounted dishes to be moved from one cell to another and maintain connectivity while traveling. That means you will have the internet in your RV at the campsite and while traveling as well.

Unlike their self-setup dishes for residential use, the filing states that the mobile version will have to be installed by a qualified technician. Once installed, you will be able to connect to satellite WiFi on the road and off, provided you have the power to keep it running.

The Downside of Starlink Internet for RVers

That should be no problem for RV park camping, but boondockers might have to conserve power in some other places if they want internet all day. The current dish hardware requires about 100 watts, which is quite a power hog. Hopefully, the team optimizes it a bit for the mobile version. As far as when Starlink internet for RVs will be available, Starlink hasn’t said.

SpaceX Director of Satellite Policy David Goldman wrote, “No longer are users willing to forego connectivity while on the move, whether driving a truck across the country, moving a freighter from Europe to a U.S. port, or while on a domestic or international flight.”

For years, RVers have dealt with poor park WiFi, spotty cell phone internet, and prohibitively expensive satellite options. One of the most popular questions new RVers have is how they can get the internet on the road.

RVers have installed cell boosters that work but don’t consistently deliver the speeds that they need. It is a never-ending battle for those who travel in their RV. The good news is the solution to RV internet could be coming soon.

Levi Henley and his wife, Natalie, workamp around the country in their
26-foot motorhome. Along with writing for RV magazines, they recently
published their first book together, Seasonal Workamping for a Living: How
We Did It. They share their experiences and RV-related tips on their own
blog henleyshappytrails.com as well as videos on their YouTube Channel,
also called Henley’s Happy Trails.