You are here: Home / RV Lifestyle / These Artists Live In A Remodeled Airstream
This post may contain affiliate links or mention our own products, please check out our disclosure policy here.

by Jennifer Jennings
March 24, 2021April 11, 2022Filed under:
Table of Contents show
Art and Life in a Tin Can with Wheels
Traditional tiny home to classic Airstream
Why These Artists Remodeled an Airstream
RVing with cats
Going off-grid
Renovating a box van
Artists in an Airstream
Find more RV LIFE Stories 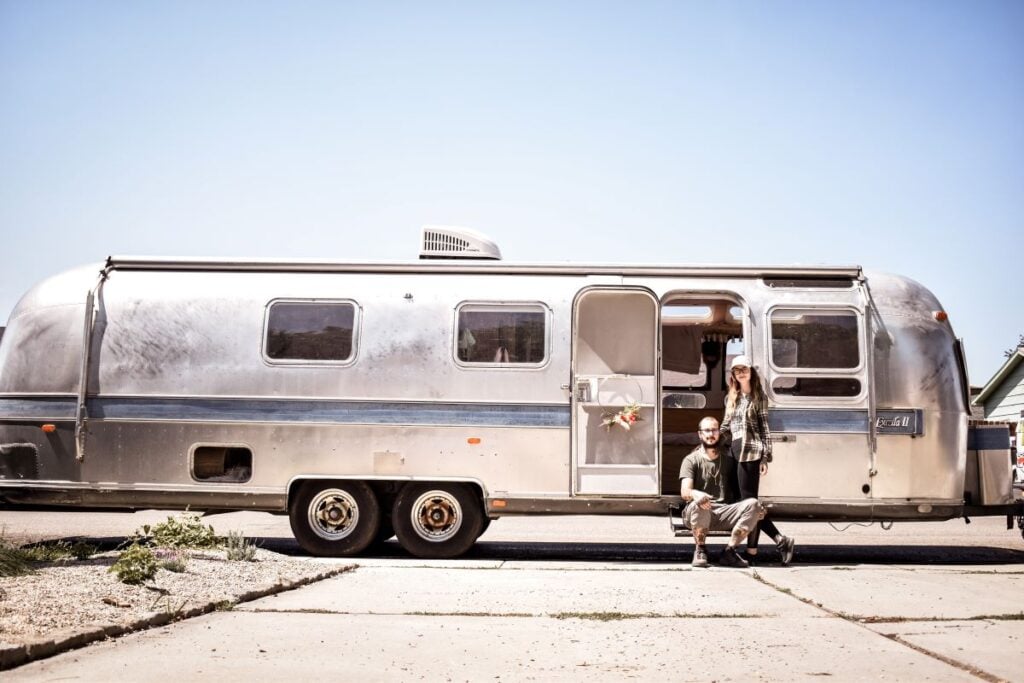 Chelsea and her husband Nick, from @roaminghills_, in their remodeled Airstream

Art and Life in a Tin Can with Wheels

Meet Chelsea and her husband Nick, from @roaminghills_, who live in their remodeled Airstream with their 3 cats.

These two artists have set up shop in Idaho while they build their brand and convert a cube van. While still in the process of finishing their tiny tin home – that is their 1981 Airstream – they have started a second project: renovating an old postal service van.

When Chelsea and Nick first had the idea to downsize to tiny living, they had intended to move into a traditional tiny home.

What is a tiny home? According to this article, a “tiny house” is defined as a dwelling that 400 square feet or less in floor area, excluding lofts. Tiny homes have started to gain popularity due to the rising housing crisis, environmental concerns, and shows like Tiny House Nation and Tiny House Hunters.

Unfortunately, they ran into problems right from the get-go. They found that in Idaho, trailer parks would not accept tiny homes due to liability issues. So instead of designing and building their dream lofted tiny home on a trailer, they turned their sights on living tiny in a remodeled Airstream trailer.

Why These Artists Remodeled an Airstream

Chelsea and Nick found their 1981 31′ long Airstream and got to work. The remodel began in October 2019. Initially, they were working on the Airstream remodel while it was parked behind Nick’s tattoo shop.

Then, in early 2020 when the pandemic hit, they decided they didn’t want to keep paying rent on their expensive downtown apartment. Still in the middle of the remodel, they hauled their tiny home to a friend’s property and moved in.

That was in April 2020. At the time, the immediate remodel needs were air conditioning, power, and water. Since then, they have been living in the construction zone and working steadily on the remodel. Chelsea says that they should be done with the renovations by May 2021. If you’re counting, that’s over a year living in a construction zone!

While living in a construction zone may not sound appealing to many, Chelsea says the experience hasn’t been all bad. In fact, it was a blessing to live and experience their “dream layout” because they realized that in fact, that dream layout needed some tweaks. By living in the trailer, they were able to see what design aspects could be improved. 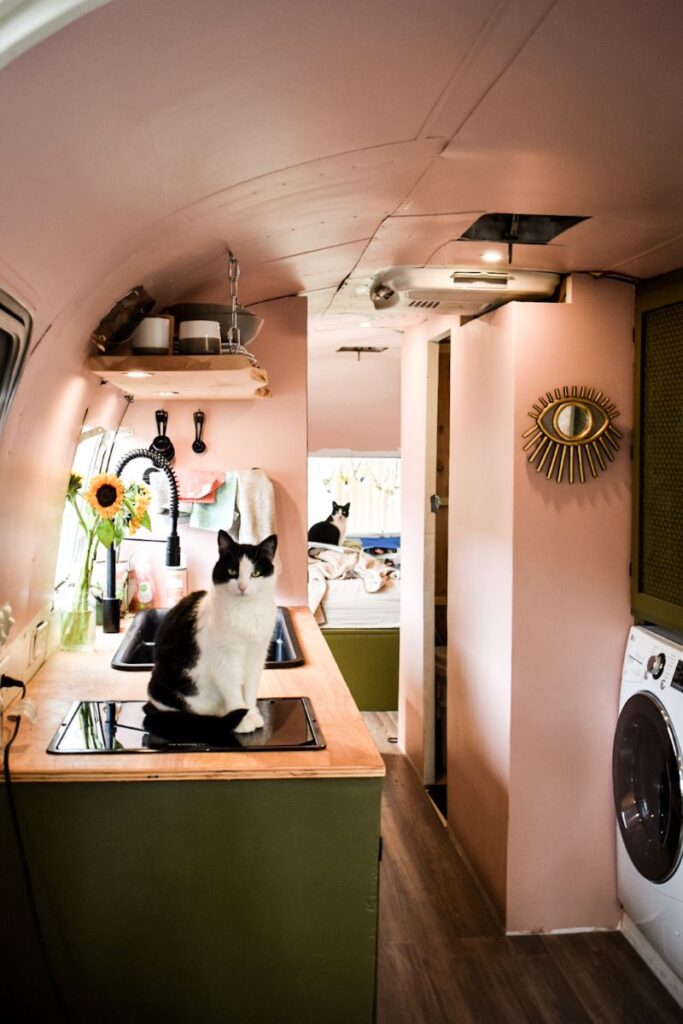 “Sometimes I forget I’m in an Airstream.” Photo from @roaminghills_

Part of this couple’s motivation to do RV life was that they could bring their 3 cats with them when they traveled. So of course, their renovations included consideration for their feline friends.

Chelsea said that in order to design the best space that would keep her cats comfortable, she observed their behavior to better understand their needs. Her advice for designing a comfortable home for pets is:

“Learn what they like and emulate that in the tiny house.”

For these 3 cats, they really like big windows which is a key feature of a classic Airstream. For an added level of comfort, the renovations included removing one of the vents and turning it into a floor-level window. This way, the cats can lay on the floor and look outside. 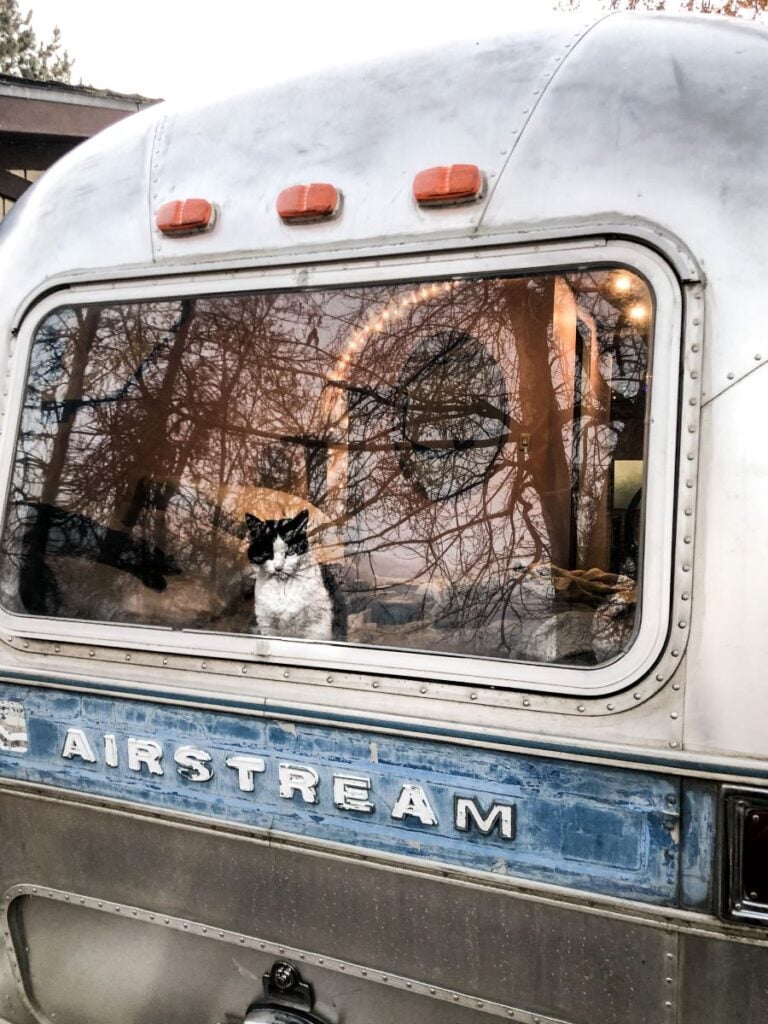 One prominent feature that Chelsea and Nick had to include for their cats is a rather large cat wheel. “It’s so annoying but I have to have it,” says Chelsea. Her one cat runs on the cat wheel every single day.

Some more advice for transitioning pets to tiny living is to be patient. Not only is it a brand new lifestyle for you, but your cat (or pet) is also having a lifestyle change. 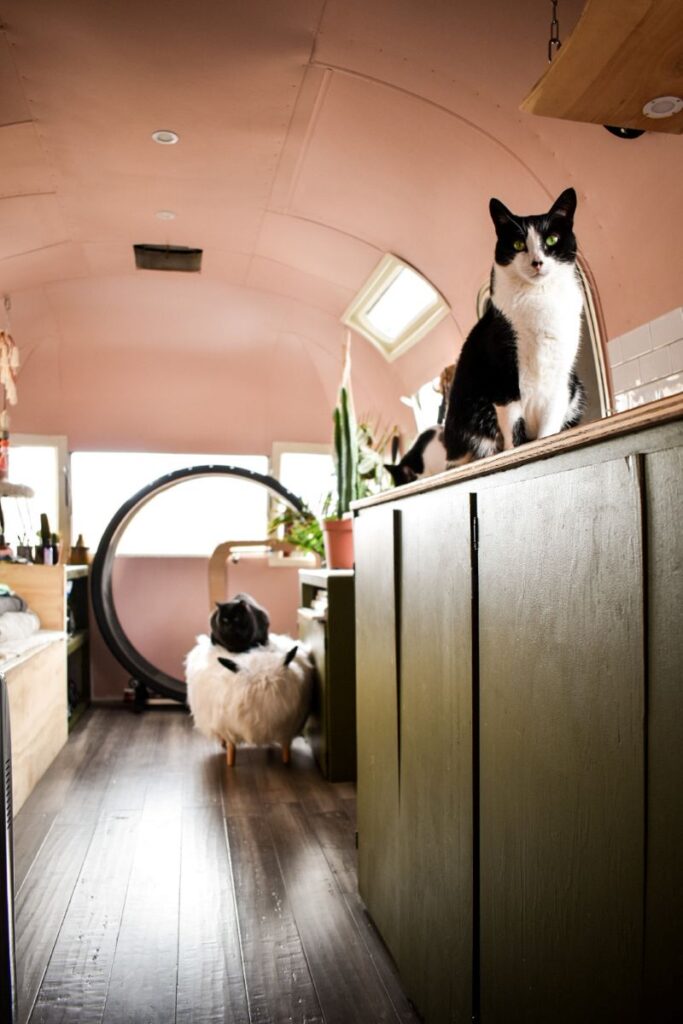 A cat wheel was a must in their remodeled Airstream. Photo from @roaminghills_

Chelsea and Nick have plans to make their remodeled Airstream even more environmentally conscious. For now, they have a composting toilet and use a French drain system for their gray water.

In their last push of renovations, they are adding a wood stove to help eliminate the use of heaters. Their goal is to make the rig be completely off the grid.

In addition to their ongoing Airstream renovation, Chelsea and Nick are also renovating an old postal box van. The van will be used to pull the Airstream as well as weekend vacations.

“We wanted something to be a home away from home.”

But for when they are hauling the Airstream, they wanted to ensure that the cats would be comfortable during transit. Some features of the van build that are for the cats are a large window and a high shelf system for a second-story cat highway.

As far as human comforts, the van build includes a bed, kitchen, and small bathroom. Their composting toilet will be moved from the Airstream to the van when needed.

Artists in an Airstream

Before the pandemic erupted, Chelsea worked as a barista. Now, she works behind the scenes of her husband’s business as well as her own projects.

Nick is a tattoo artist and also does woodworking. He has an art show coming up this May at a spot in downtown Boise.

Chelsea creates custom embroidery works of art showcasing clients’ pets. Her newest project (because renovating an Airstream and van are not enough), is studying interior design. All of their artwork is displayed on their Instagram @the.hill.co. 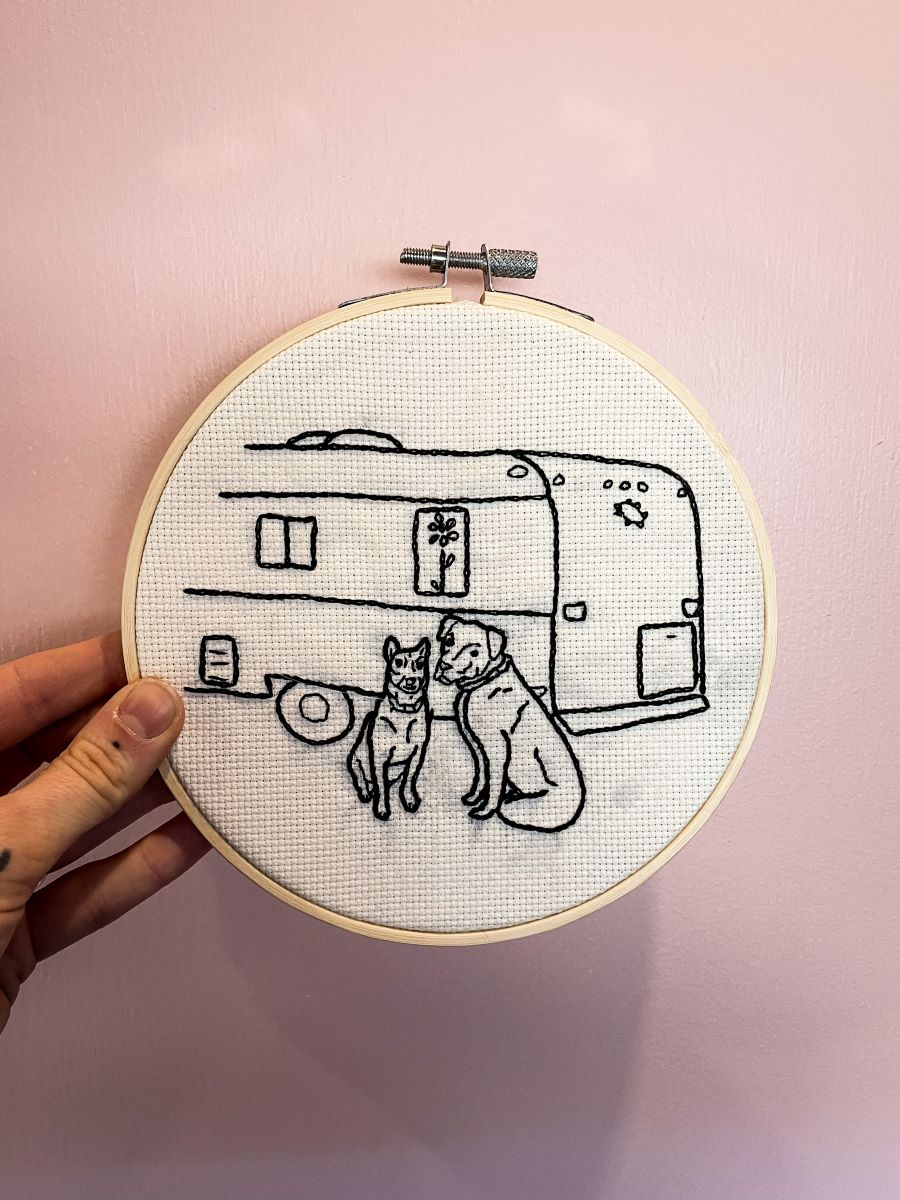 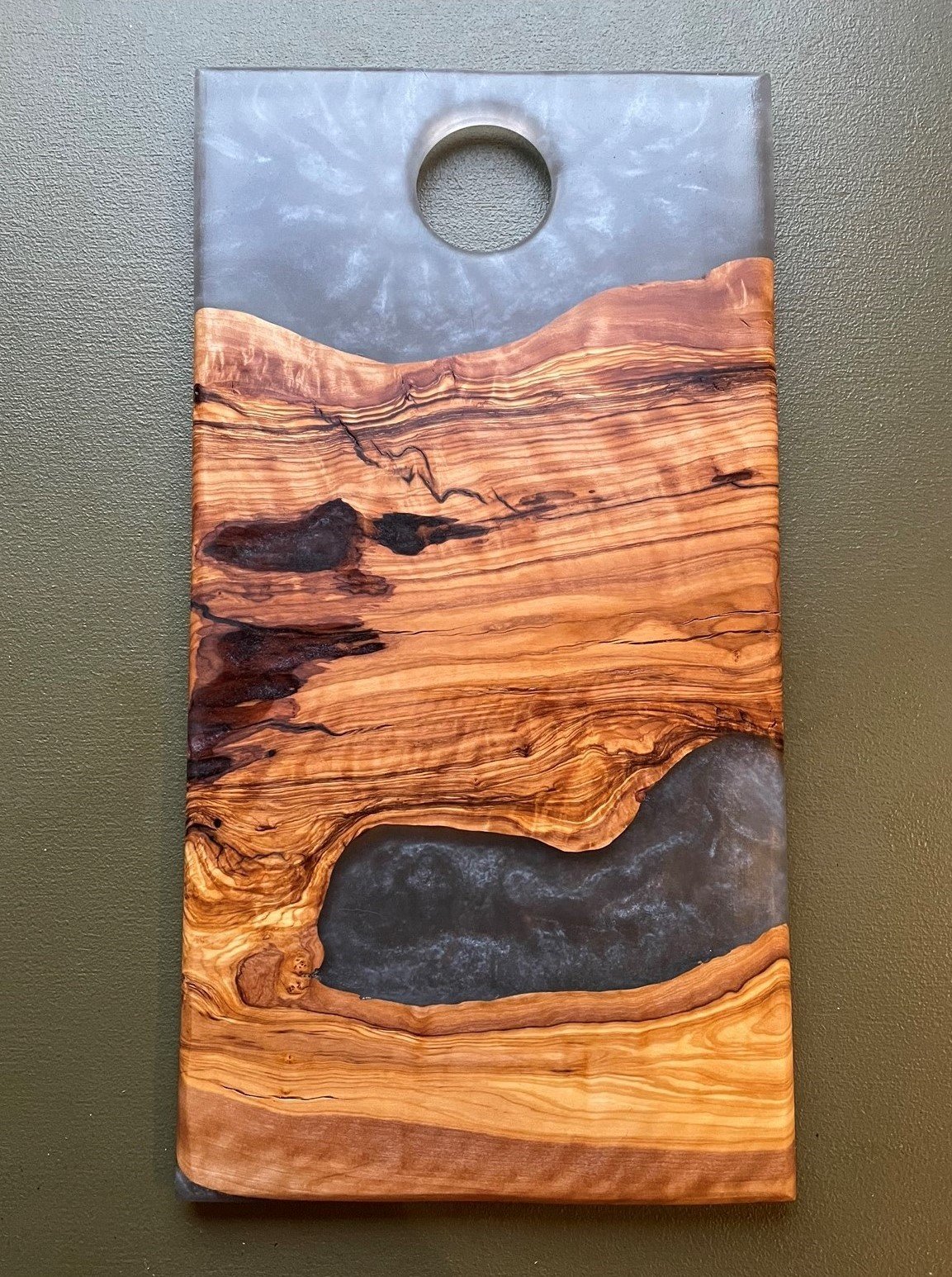 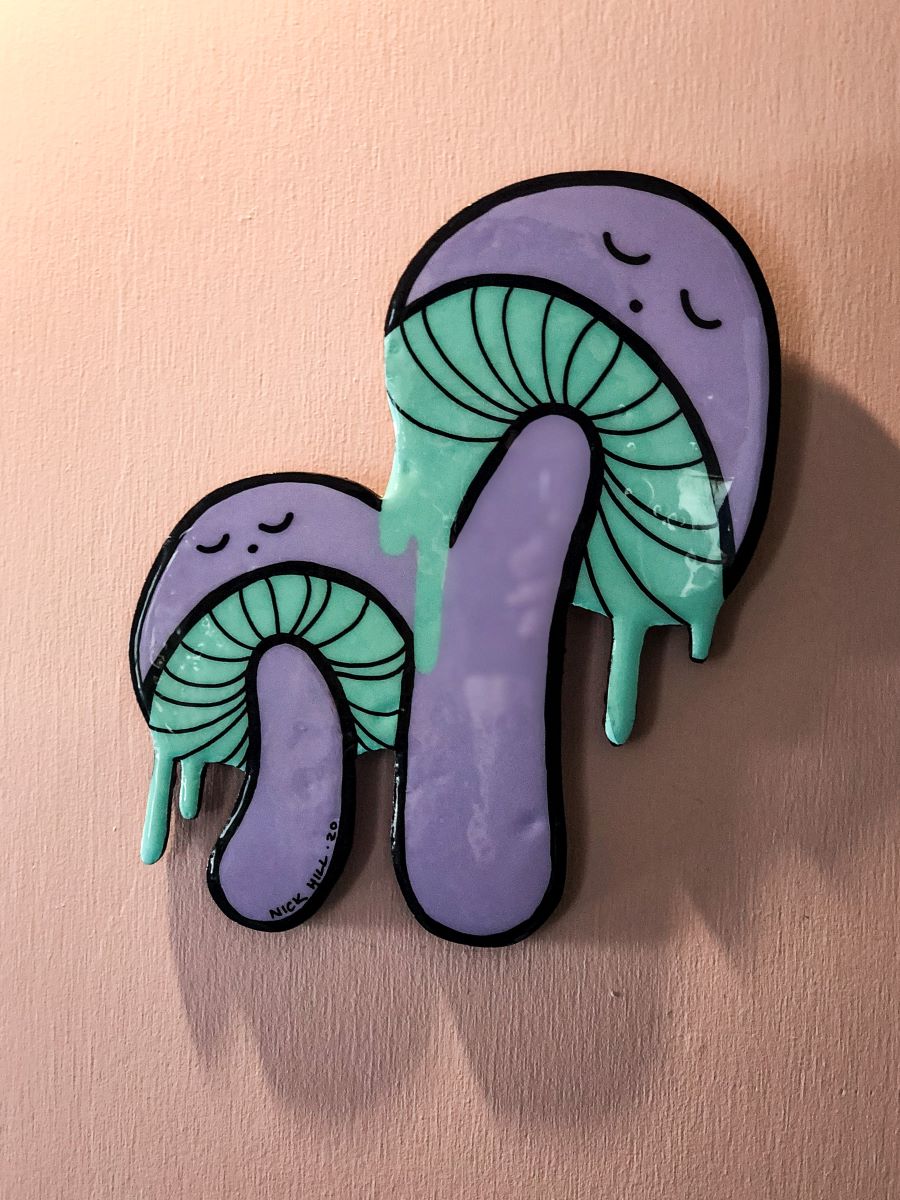 These two are happy living tiny in their remodeled Airstream with their 3 cats and plenty of projects and adventures on the horizon. Their Instagram is full of Airstream renovation tips, living tiny advice, and lots of DIY projects.