You are here: Home / Top Stories / Wildfire Evacuation Tips From Creek Fire Workamper Heroes
This post may contain affiliate links or mention our own products, please check out our disclosure policy here. 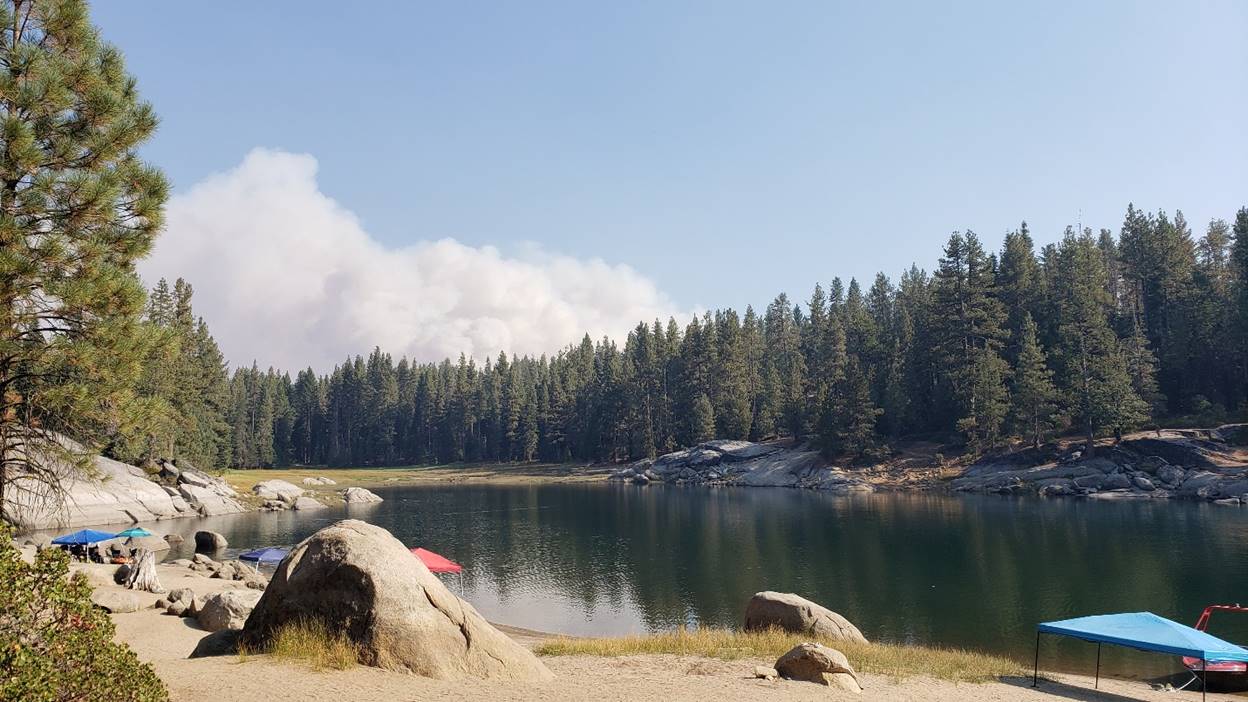 Nobody ever expects to end an RV trip by fleeing a natural disaster. But these wildfire campground evacuation tips from two workamper heroes can save your life if the worst-case scenario happens during your next adventure.

It Started with The Creek Fire in California

It was a busy summer managing the Dorabelle Campground on the shores of Camp Edison in Shaver Lake, California. By September, workampers Bert and Lupe felt they could handle any situation. “We had finally figured out how to deal with all the issues with campers, handle our work load and not wear ourselves out working 10 hours days,” said Bert in an email interview.

Fully prepared for a busy Labor Day weekend, the couple saw ash falling from the sky on Friday morning. They immediately knew something was wrong and would soon learn the Creek Fire was exploding less than five miles away. Then, their camp host skills got put to the test to direct an evacuation of the busy campground.

“On Friday September 4th, we started seeing a lot of ash in the morning, all over everything in our campsite. Saturday morning about 6:30 a.m. I noticed it was even worse, and we found out there was a fire close-by that had started overnight on Friday. Lupe, who was in the office that morning, started giving 15-minute reports over the walkie-talkies for us to share with campers.”

Preparing for a wildfire evacuation

Their nearest supervisor was twenty miles away at Huntington Lake. He informed Bert and Lupe that a mandatory evacuation was happening in that area, and they should contact the local sheriff’s office for wildfire evacuation tips and procedures. 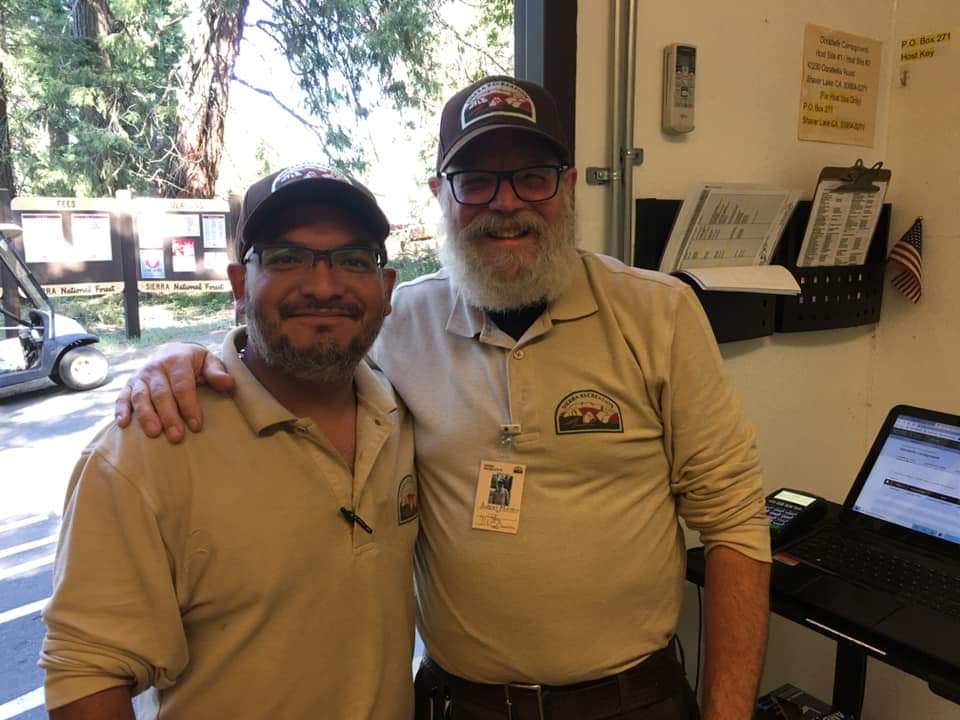 Lupe and Bert managed the Dorabelle Campground on Shaver Lake.

In preparation for the worst, Bert downloaded an app called Everbridge. This free app is designed to work under adverse network conditions. It allows anyone to easily connect with public safety agencies, employers, and other institutions or universities to receive vital information during critical events or while managing an incident response. It also allows users to send an SOS to these agencies.

Next, they began warning campers about a possible mandatory evacuation. Power to the campground got cut at 10:00 AM. By 4:00 pm, the office backup battery was depleted. Sheriff officers then arrived to announce that the fire was closer than ever—but evacuating was still optional.

The ultimate decision to leave rested in the camp hosts’ hands. “We were still under evacuation warning, however, the fire was at Shaver Point near the Shaver Lake Dam about 4 miles away and one mile from the lake. He said there was one fire break between us and the fire and that if it got past that break it would likely get to the campground faster than they could.”

Bert and Lupe decided not to wait to find out how fast the fire could move. They opted to begin the evacuation process with the workamping team, while relying on their own cell phones to keep the lines of communication flowing. “Our main concern was the safety of all campers and our own safety. So, we drove through the campground many times checking on campers moving out and calling others on the phone to get them back to the campground to pack up their stuff and leave.”

Campers didn’t argue about cutting their weekend short. Ash fell harder, daylight faded to an ominous yellow glow and nobody was in the mood for fun. “Most people understood better than we did (since they were from California and had experienced California fires before) that the day would only get worse and getting out fast was really the only option,” said Bert. 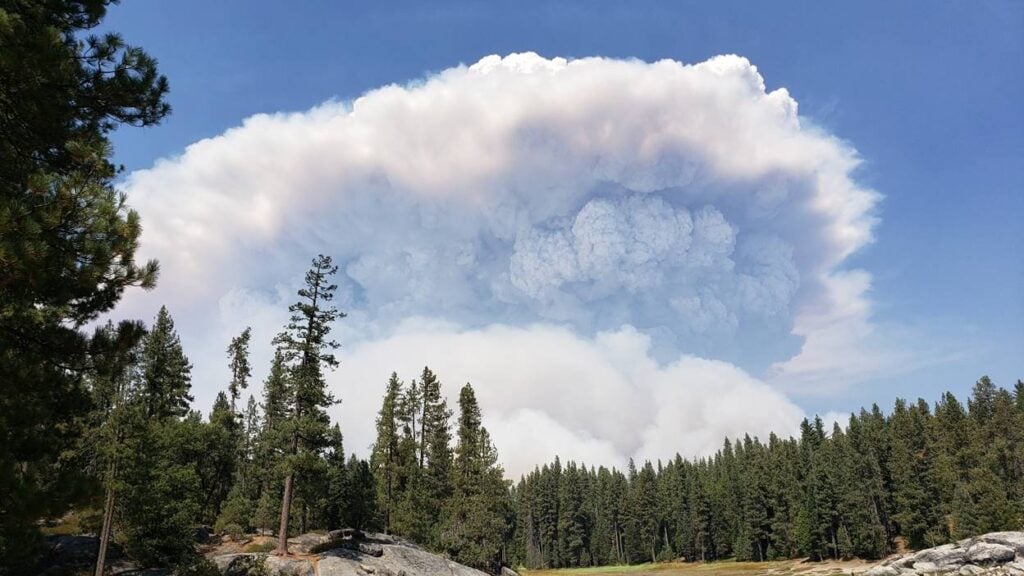 The safe, efficient evacuation was a team effort

While authorities began shutting down roads and detouring traffic, Dorabelle workampers piloted a golf cart around the campground to aid fleeing campers and give fire updates. Workampers heroically continued carrying out their own duties to clear the campground of trash and extinguish campfires. Finally, they packed up their own gear and left non-essential gear behind, assuming they would be back in a few days.

By 6:00 PM, all campers and workampers had fled the area. The official evacuation notice appeared in Everbridge on Sunday, September 6, at 7:19 a.m. The fire was already decimating the surrounding forests, putting an end to Bert and Lupe’s summer job.

If a camper is caught in a wildfire emergency, Bert offers the following wildfire evacuation tips. This information can get you out as safely and quickly as possible:

Read more about the current West Coast wildfires in this Camper Report article.